While The Pope Says You Don't Have To Believe In God To Go To Heaven, And Build No Border Walls... - The Marshall Report Skip to the content

Outside the Vatican WALLS there is a DOOR, like the one Trump wants. Well almost, Trumps will be prettier.  So will the Trump wall. 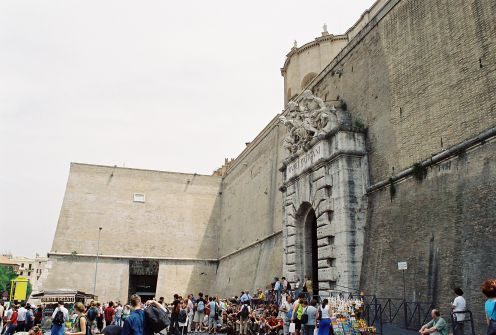 While the Pope is visiting the United States and driving around in a tiny Fiat, with an entourage that is HUGE, you know real big and long with lots and lots of big CARS and high level security! I had to laugh a little.  Okay, I admit it, I laughed a lot.

Then I thought about the blogs and posts circulating the internet that tell what he has been saying and doing on his visit.  That stopped my laughter and put me back into a jaw dropping mode.  His new ideas on God, since the old ideas he said were outdated. Things like you don’t have to believe in God to go to heaven. (???)  Then there is the don’t build a wall America thing because we have to be caring to all who need a place to…..to what?  To squat?  To invade?  To kill, steal and destroy?  To demand we take in their culture as well and forget who we are?  Why don’t the Pope just come out and say it like it is…..America you need to become globalized and let Obama make you a New World Order and shred the rest of your constitution.

I for one do not care what man says, any of them.  I will not allow such evil remarks to lurk in the shadows of my mind let alone linger.  Sorry to those who are of the Catholic faith, but let’s be honest here – even you know these things are not right things to say.

Imagine if I were a guest in a Catholic church and I stood up and said such things to the congregation?  They would haul my butt out fast.  I would be accused of blasphemy and disruption.  They would be disgraced at what they would consider slander to God and to the church.  But, only because I am not the Pope and it appears only he can pull that type of one world religion with no God consequences jargon off and people applaud.

And let’s look at the wall statement while at it.  Have you seen the walls around the Vatican?  Wow….very impressive.

Well I haven’t drunk the kool-aid they call wine nor have I ate the wafer that makes you forget.  I am of the old fashioned Bible no matter how outdated the Pope believes it is.  How about you?

Below are more views of the great and huge walls that enclose and protect the Vatican.  What happened to his advice to us of open borders and no walls?  Hypocrisy?  Looks like it to me.  I will do as they do on this one issue only  and not as they say. 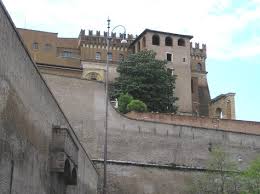 Big walls that surround the Vatican.  I mean big! 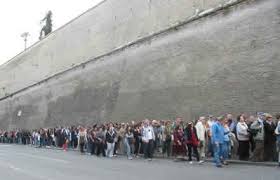