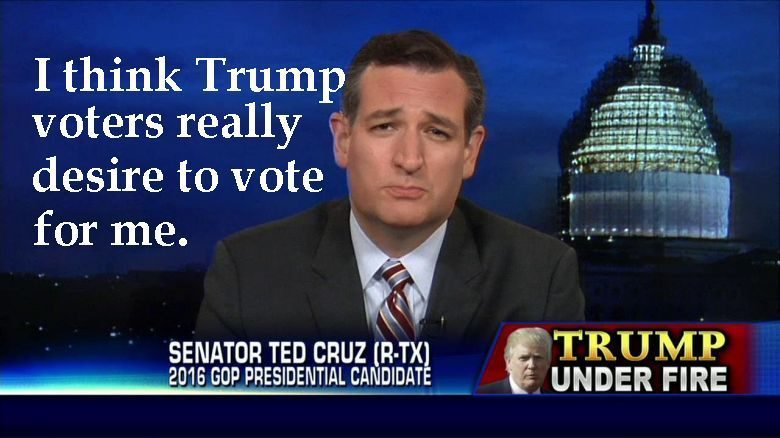 ATTENTION ALL TRUMP VOTERS – How many of you agree with Ted Cruz that if Trump is kicked out of the election all his voters will flock to support him?  And how many of you Trump voters are absolutely appalled at Cruz’s pompous rhetoric regarding your vote?  Ted is of the mindset that all he has to do is sit tight and let the GOP and media do their dirty work to oust Trump and he will reap all of your votes because he is such a good all American candidate.
Well, Cruz, I have news for you – I see through your lies and your hugging insults – when you are properly vetted, which will be very soon, you will be weighed in the balance and found wanting and full of deceit.  “Viper” will be your code name for you have acted like both Judas and Pontius Pilot at the same time.  You have kissed your enemy like your beloved and washed your hands of any wrong doing. You are busted.  The game is up. This is a political campaign and the best candidate will win.  Quit acting like this is a church gathering to elect a new pastor and you have to love the other guy.  Get real!  Listening to your “I hug them tighter” garbage when attacked by your opponents needs a few more words added to better describe what you do.  It would be more honest for you to say,  “I hug them tighter so my arm will reach to better place the knife in their backs”.
Now, Cruz in a bold move, told a crowd that Donald Trump does not have the right judgment to be president.  When called out on the remark by Trump – Cruz did what he is good at.  He lied and denied saying it.  But, to his misfortune, a sound byte on his statement, by a private individual had already been released to the public.

Listen to the audio here:   an audio recording of his comments provided by one attendee.

“Both of them I like and respect. I don’t believe either one of them is going to be our president.” said Cruz.

“You look at Paris, you look at San Bernardino, it’s given a seriousness to this race, that people are looking for: Who is prepared to be a commander in chief? Who understands the threats we face?

I, for one,  am sick of listening to Ted Cruz and his Shakespeare-like fake arm stretching speeches that lack any real emotion at all.  I will not vote for Cruz if Trump is kicked out of the race? Will you?  Cruz thinks Trump voters are some sort of zombie groupie.  He fails to understand we are Americans that are sick and tired of politico’s who smile and say “trust me, I stood up for you in the senate”, all the while accomplishing NOTHING BUT SELF PROMOTION!
If Trump does not win the presidency – kiss America good by, for it will be the new world order.  Cruz is in their hip pocket, do not be deceived.  Those that are of another opinion – it is your choice.  Just watch as the vetting process begins, for up to now…not much about Cruz has been vetted but his eligibility to run for office and that is still being debated.
READ MORE HERE:  https://www.nytimes.com/politics/first-draft/2015/12/10/ted-cruz-questions-donald-trumps-judgment-to-be-president/?_r=0
Dianne Marshall