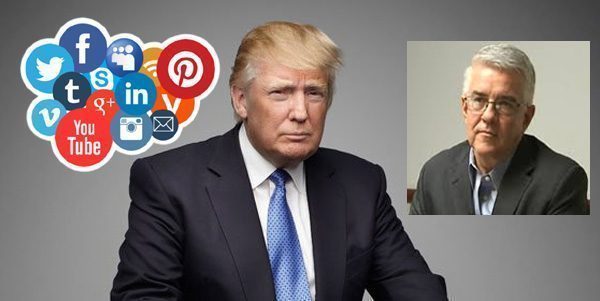 Leader Technologies and Founder Michael McKibben filed a MILLER ACT NOTICE to the U.S. Executive, President Donald Trump. President Trump is asked to compensate Leader for the theft of their inventions by the Deep State shadow government. Leader’s social networking invention was stolen by Clinton’s spy master James P. Chandler in 2000 in order to hijack the Internet. Deep State lawyer notes actually called it a “coup.” 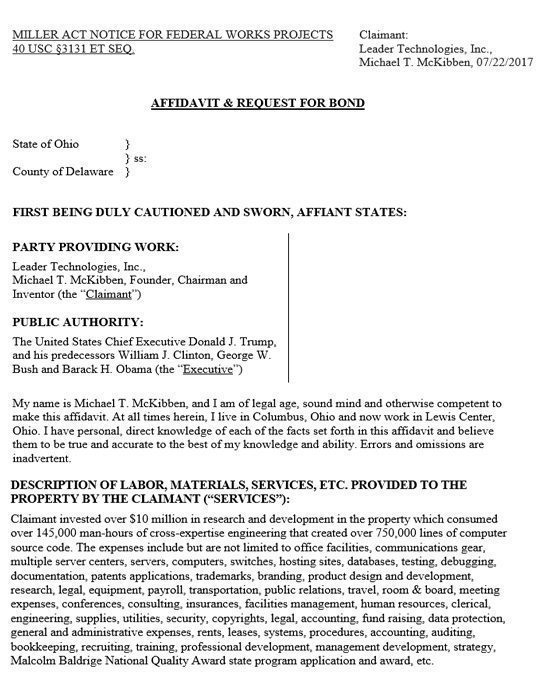 Above – page one of the Miller Act Notice to President Trump.  What a gift to Trump – he can fix this with his pen and executive authority.  Imagine having all the tech boards bank accounts frozen until this mess is fixed?  (Just wishing). What is at stake is our freedom of information and speech.  It appears that the evil swamp dwellers have inched their way into stealing our freedoms via social media and technology.

Watch full video below for details from Michael McKibben –

The following information is from Michael McKibbens:

The timeline below reveals disturbing long-time collusion of Leader’s former patent attorney, James P. Chandler, with the White House ever since Bill Clinton’s presidency, right through George Bush and Barack Obama. It also shows his collusion with rogue intelligence operatives in the NSA, CIA, FBI and with IBM, among others. Perhaps this is why former executives from these agencies are speaking out against President Trump right now? They are attempting to hide this collusion? 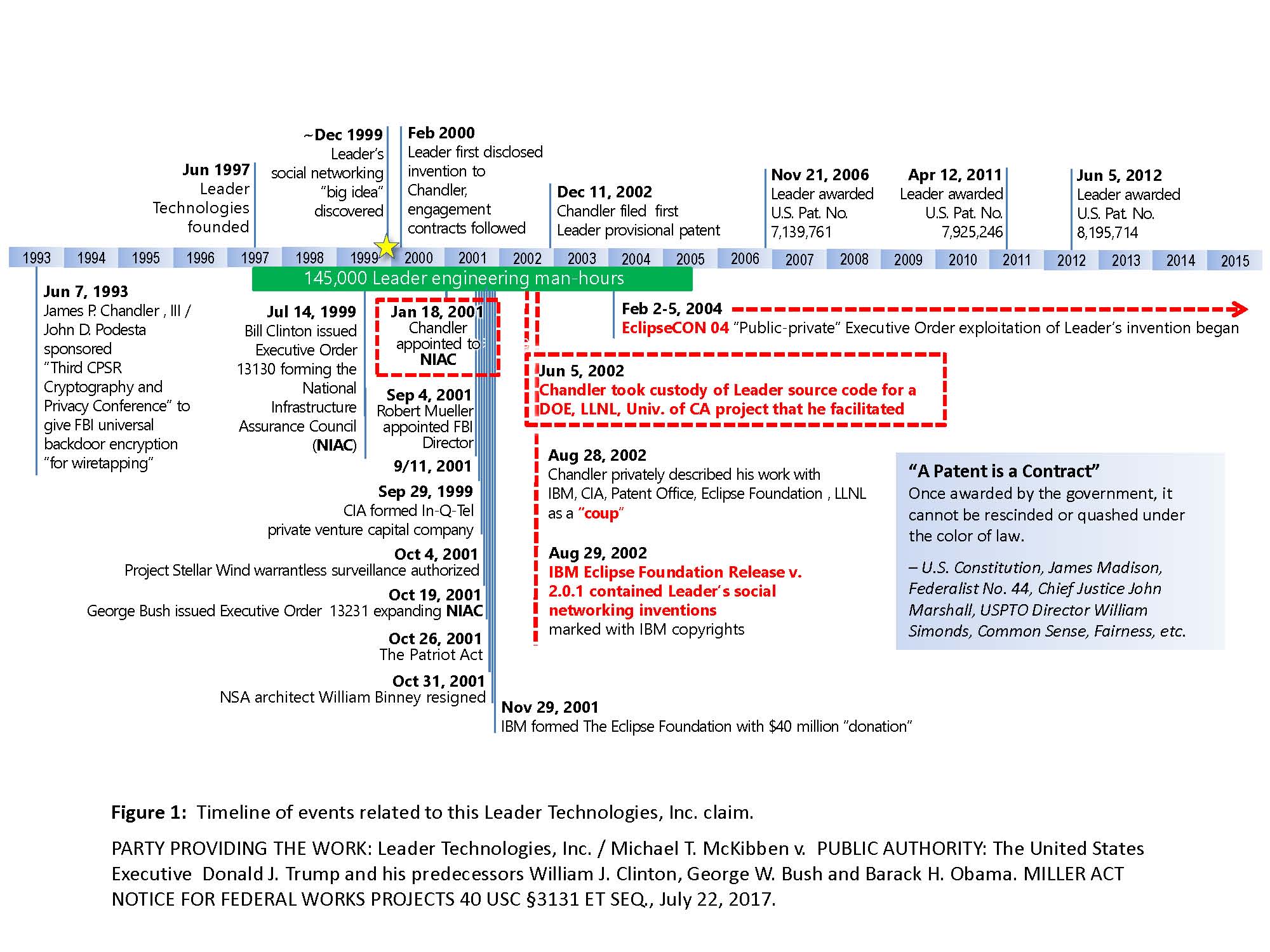 NEXT – WHAT WILL PRESIDENT TRUMP DO WITH THIS ONE –

Russian collusion—Yes! Proven for Hillary, Bill, Podesta, Google, Intel and cisco – shall we call this one Cybergate?

See the facts: Story from American’s For Innovation:
McKibben said, “It is too easy for Americans to simply yell ‘The Russians!’ because relatively few Americans go there, much less fly to the Crimea, for example, and verify the stories. So, it is safe to make up lies and never get caught. By the way, I have actually been to the Crimea. I have met families who lost their loved ones in Stalin’s mass starvation of up to 10 million Ukrainian Christian farmers (as much as 25% of the population) who were resisting Communism in 1932-33 (Holodomor).”
McKibben continued, “several PROVABLE RUSSIAN FACTS are that Bill Clinton was paid $500,000 for a Renaissance Capital speech in Moscow on Jun. 29, 2010, according to Hillary Clinton 2010 financial disclosure. Another proven fact from the Massachusetts Secretary of State corporate filings is that John Podesta was a director of Joule Unlimited in Boston when Putin’s company Rusnano invested $35 million.” See below: 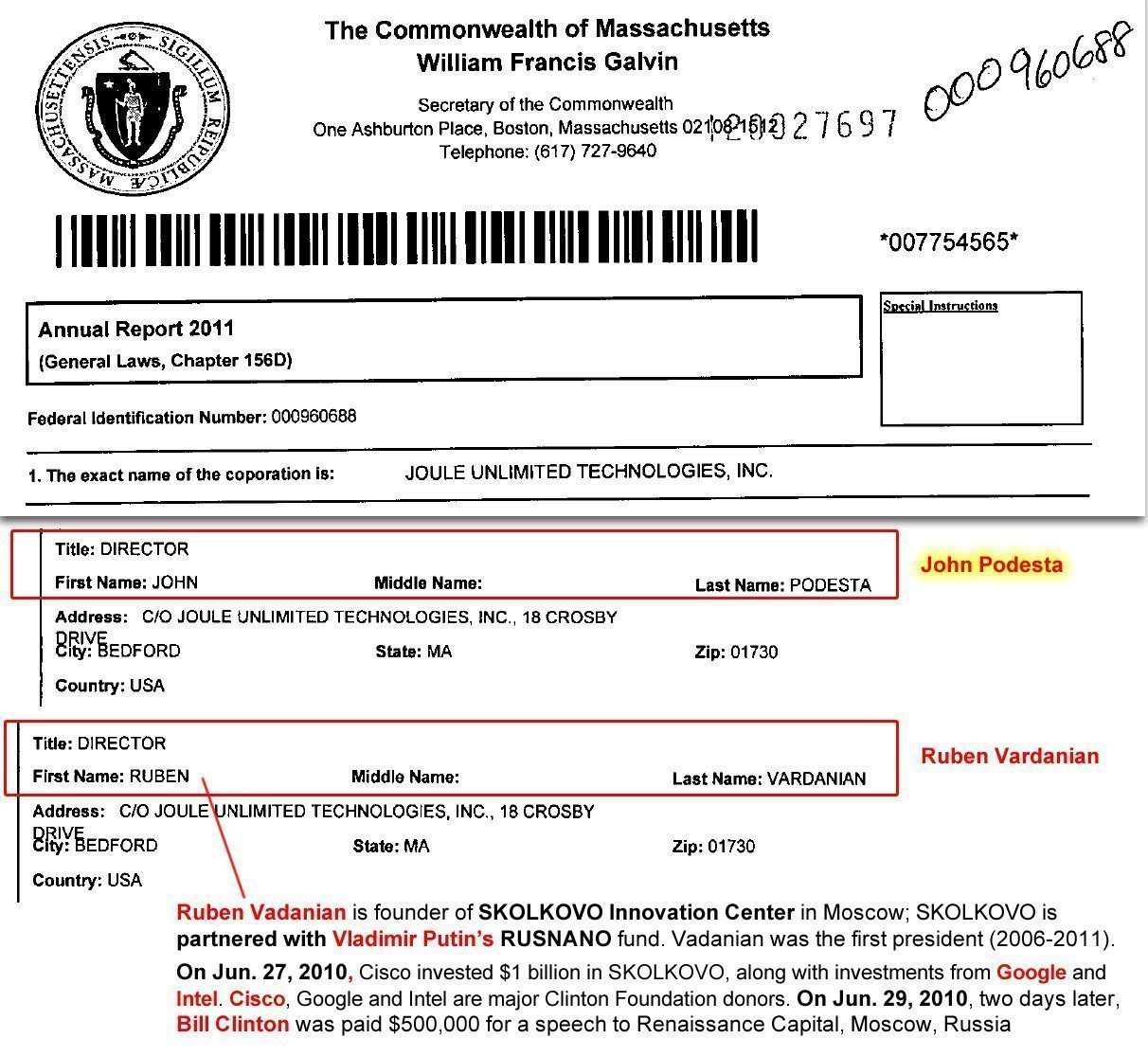 “Those engagements clearly broke U.S. law and showed the Russians that American values are equally as corrupt as theirs. It is utterly immoral that Obama, Clinton and their Deep State cohorts allowed this to go on with no accountabilty or consequence.”
McKibben believes that the shadow government elitists who stole his social networking inventions are projecting their sins onto Donald Trump as a smoke screen. He says, “it’s a red herring, in my opinion.”
In the 70’s and early 80’s, McKibben, a civil engineer and former professonal musician, took contemporary Gospel music groups named Living Sound into Poland and the Soviet Union at the height of the Cold War. He said, “while Leonid Brezhnev was still ruling, honest Soviet citizens sacrificed greatly to achieve some unprecedented results from that work, including organizing our Gospel music performance on national Soviet TV, our music being included on the official 1980 Moscow Summer Olympics film, and the distribution of up to one million Living Sound EPs in 1981.”
McKibben says he may have even encountered a young KGB officer named Vladimir Putin at a Leningrad airport security checkpoint where he was body searched after meeting with a Christian activist in Estonia whose sole crime was the anti-Soviet organizing of Christian concerts, and had just been released from prison. Putin was in charge of monitoring foreigners in Leningrad then.
McKibben said in recent years Vladimir Putin says he has come to embrace the Christian faith that he once persecuted. “I hope and pray that is true,” said McKibben, who counts John Paul II (now sainted) among his friends and patrons from his work in Poland. “In 1995, I met the late Russian Patriarch Alexy and the current Patriarch Kirill. I also participated in one of the first Church processions allowed in the streets of Moscow since 1917. It was a moving event. We stopped at Lubyanka Square (the former KGB headquarters—infamously known as the “Gateway to the Gulag” through which millions of citizens were sent to their deaths), just after the mass murderer Dzerzhinsky’s statue had been toppled and a rough-hewn cross had been strapped to its base. We sang the Orthodox Christian funeral hymn ‘Memory Eternal’ remembering the martyrs of the Gulag. I will never forget it.”
“Mr. Putin’s conduct appears contradictory, but such contradictions are not unique to Russians! The closet Muslim Barack Hussein Obama told us before the 2008 election that he was a Christian too. That was evidently a heinous lie. Time will tell regarding Mr. Putin. Jesus said you will know people’s real values by the fruits of their actions, not their words.”
“Do I blame the Russian government for trying to engage Clinton and Podesta? No. Everyone has known for decades that is what they do. But, to demonize the whole country of Russia is absolutely ridiculous. I know scores of honest, ethical Russians. I watched some of my Russian friends serve prison terms in the U.S.S.R. for standing up for truth and against the lies in their communist society. The grandfather of one friend came out of the Gulag with tuberculosis after suffering for over five years in 10 Soviet prisons and camps. His grandpa died at age 34 from that tuberculosis. What was his grandpa’s crime? Befriending American soldiers from the 69th Infantry Division who took him in off the streets after he was liberated from a German slave labor camp.”
“America was called by God to set a higher ethical example for the world. We desperately need to get back to our roots.”
“Do I blame Clinton and Podesta for cutting secret deals with the Russians while she was Secretary of State in order to enrich The Clinton Foundation and their globalist agenda? Yes—absolutely!”  Michael McKibbens 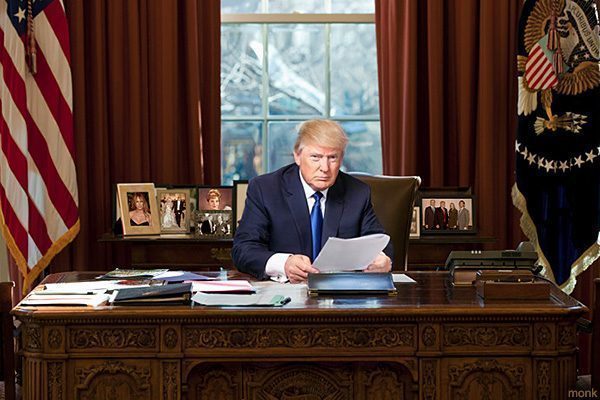 President Trump will do the right thing.  He has all the goods on the deep state villains. Let him know we want to end the evil forces who control our freedom on the internet.