https://www.youtube.com/watch?v=kxi23DRggMM
Trump has no time to waste messing around with a Canadian/Cuban ineligible candidate.  He is too busy accepting more and more endorsements from eager and devoted supporters. This time it is the Iowa Hawkeye Football Team!  Congratulations – they love Trump.  He’s as tough as any coach can be – and they know a leader when they see one!
I mean, come on folks, why should he even entertain the idea of a fraud citizen running?  Why should he stand on a debate stage and by doing so recognize the acceptance the corrupt GOP and establishment media insult to the constitution of having an ineligible candidate named Rafael Edward Cruz on the stage.  Several ineligibles actually….if you count the fraudulent self interpretations of natural citizenship given by Rubio and some say Santorum as well. 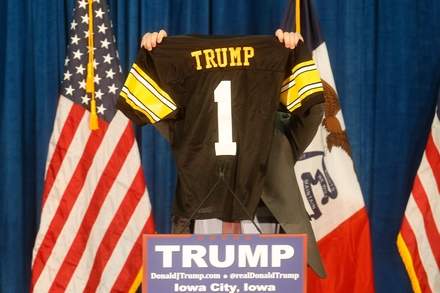 I mean what’s next….will they accept illegals too if they decide to run for president? They are already saying they can represent voting blocks. Good grief.  We need Trump fast.  Hold on – he’s on his way to the White House! Just get out and vote!
Dianne Marshall