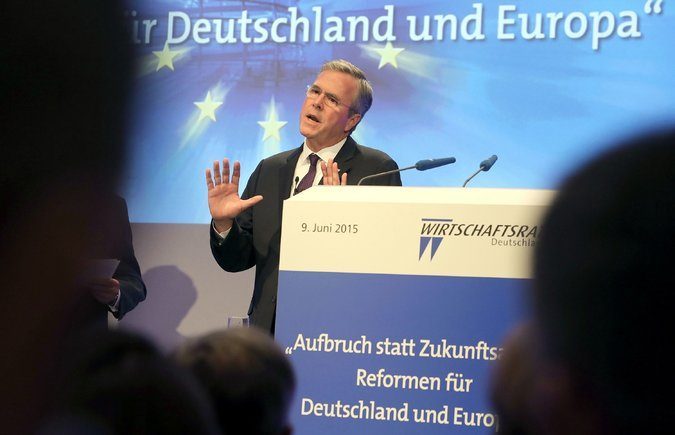 Why would anyone hire Danny Lopez Diaz as a campaign manager with such a long list of failures to get anyone elected? Well at least he failed with McCain, and Romney.   Diaz is a national communications consultant and political strategist for candidates of the Republican Party, so why not have Jeb hire him to manage his campaign ?  After all, it appears he does have an impressive resume for pushing the RINO agenda packages.

In 2004,  Diaz served as the  southwest regional press secretary for Bush-Cheney ’04, managing press in nine states eventually won by the GOP ticket. He also was a member of its National Hispanic Working Group, later to be hired as deputy communications director at the Republican National Committee (RNC), where he worked through the 2005-06 election cycle. He also helped to develop a media plan to advance the nominations of John Roberts and Samuel Alito to the U.S. Supreme Court; and  handled the Hispanic outreach for the Party.  So he is a Bush guy all the way.  But, where is his magic for this Bush? And why is he in Germany speaking on “Political Communications” during a failed Jeb campaign where his strategies are needed most?

During his speech, in Berlin, a report stated that Diaz, “ticked off selective polling numbers pitting Bush against Donald Trump and Hillary Clinton, touted early state advertising buys and trumpeted a handful of endorsements by elected officials.”

A Bush spokeswoman told U.S. News that the Berlin trip was scheduled before Diaz joined the campaign in June and that he was only there for “like five hours.”

After slushing out over $5 million in advertising, Jeb is still headed for the kiddy table in the next debate as his numbers are falling to that point. It also appears that the intra venous drip of money into his campaign has dried up.  Time will tell if Diaz’s so-called scheduled trip to Berlin to give a speech before he was the Bush campaign manager, of which he sought to get Bush support, will pay off.  If you think that was a mouth full, imagine what Berlin must have been thinking?

But then again, Jeb kicked off his campaign in Berlin and shot himself in the foot, why not end it there? If you recall, in June, Jeb spoke in Berlin trying to sell America’s failed foreign policy and went delivered an anti-Putin rant.  This successfully alienated a lot of  the pro-Russian German audience.  Can it get any worse for him and his brother and daddy? I hope so. But this all gives new meaning to the Trump question….”Why is Jeb’s campaign manager in Berlin?”