Most Americans are unaware that the civil war was not just a battle between the north and the south.  It was a political and trade battle spurred by the industrial  revolution that the tycoons envisioned for their future.  What we call today the “establishment elite” with far reaching hands extending over seas.

The real battle lines were global and drawn between the  alliance of  the Union and the Russian Empire, against the Confederacy in alliance with England and France (the Russell-Palmerston alliance) and the war tactics of Louis Napoleon III.

Without the alliance of the Russian Tsar Alexander II, and Russia’s show of force with their navel fleets in our harbors , and huge land armies ready to roll over the Ottoman Empire and India, threatening to end the British political domination from the Balkans through the Middle East to London’s subcontinental “jewel” of India- the Union would have found itself in a losing battle. Needless to say Great Britain and France would have continued their plans to aid the southern states, leaving Lincoln and the Union with losing odds.

For the truth is, the war between the north and the south was actually a global political war that several times, came an inch away from being an all out bloody global war. Had Russia not lined up with the Union, Germany would have easily been persuaded to join the efforts of England and France.

The British plan was already in the works since 1860 to dismember both the United States and Russia. This was the prelude to enacting a “new world order”.  An order with no sovereign nation states, centered on a British-controlled Grand Confederacy, labeled by British policymakers “The United States of Europe.’

Today, Putin is taking the ISIS crisis by the horns and asking both France and Great Britain to do their part in ridding the terrorists in Syria and Iraq.  He is also asking the United States to do the same.  It made me wonder if  history was once again repeating itself? It made me stop and think who will align with who?  Please read the link below. It will tell you all the fascinating details of the civil war. My abbreviated version is not enough to get the full understanding of how today’s political, situation, international and domestic is looking a lot like the same one that fomented the civil war.  Ironically all the players are the same.

Abraham Lincoln and the Tsar Alexander II both vowed to liberate the people from slavery …and both were tragically assassinated. President Lincoln was shot in the head during a 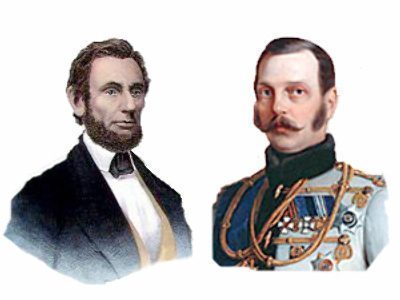 theater performance in 1865, and Alexander II was killed in 1881 when his carriage was bombed in St.Petersburg.

Today the two remain towering figures of history and are enshrined, one at the Lincoln memorial in Washington DC which reads ”The protector of the union,” and the other a statue in Moscow outside of Christ the Savior Cathedral titled ”The liberator.”

Vladimir Putin entered his Presidency of Russia with a vow to restore Mother Russia.  The same Russia that was ruled by the Romanof Dynasty for more than 300 years, until the revolution which ended a free Christian Mother Russia and birthed the Communist Soviet Union.  When the wall came down Russia was once again free, but without many of the states that belonged to her and freedoms.  Putin spoke of this on 60 minutes.  When you understand the history, you will understand Putin’s passion for both restoring and protecting his nation. You will see why the Church is so important to him and to the Russian people. You will see that when he says he will defend Christians, he has a purpose to do so.  He will not surrender nor sell out to the same western world order that sought to destroy Russia in 1860.  He is a Russian patriot no different than any American who loves their country.

Sadly the true history  of Russia’s fall was purposely concealed from  our school classrooms. I suspect it did not meet sustainable development standards for the 21st century.