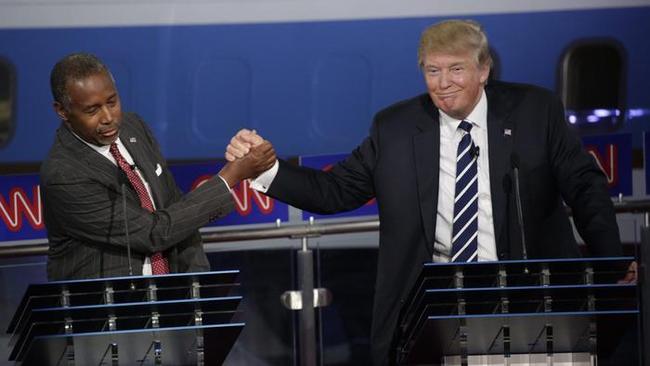 It’s pretty pathetic when NBC reduces its integrity to zero in order to show a poll that can boost their darling of the week clean up to the top claiming a neck to neck competitive edge against Trump. In this case it was Ben Carson.

Trump supporters and I’m sure even Carson himself were wondering just how that happened.  Now we all know.  NBC polled a whopping 59 people in their unbiased interview survey. And if I’m reading this correctly that number was derived from 21 % of Republican primary voters out of 59 interviewed.  GOOD GRIEF CAN IT CAN ANY MORE EMBARRASING FOR NBC AND THE GOP THAN THIS?

NEWSMAX  lead in to their liar breaking news about the polls with this:

In the GOP race, Trump is the first choice of 21 percent of Republican primary voters — followed by Carson at 20 percent and Rubio and Fiorina tied at 11 percent each.

Then at the very bottom of all their jibber jabber  (if you bothered to read that far) NEWSMAX  ended with this:

NBC reported that the poll was conducted Sept. 20-24 — so mostly after Walker suspended his campaign on Sept. 21. Only one GOP primary voter (out of 59 interviews) had selected Walker before he was removed from the survey.

Please tell me if I am missing something here or if I read this exact? I don’t know of one Trump Supporter who has left the building….so something is rigged here big time….I think this makes the most sense.  Polls have to give the numbers they interviewed to come up with their results and 59 were the only numbers offered.  So you tell me?