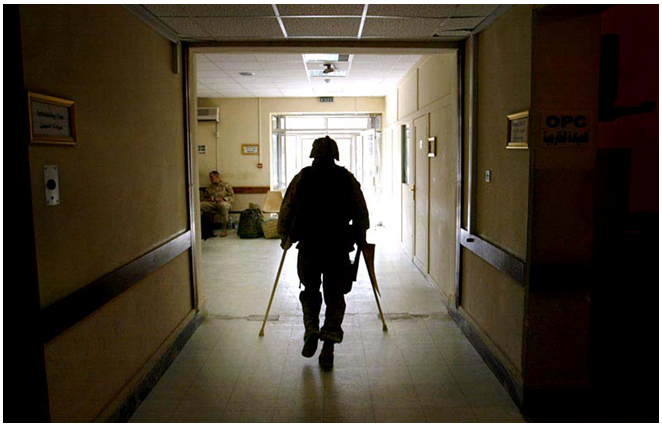 It is a shame that the Cruz supporters and Ted Cruz himself is supporting liberal left progressive anti-veteran and wounded warrior trashing agenda all because of a political campaign. Or maybe not.  Maybe that is how they truly feel?  Who knows any more?
When the campaign is over and the smoke settles what will be left are Americans who will be looking at the distain and venom spewed by so called conservatives onto the men and women who put their lives on the line to fight for their freedoms. Many never made it back home.  Many of those who did make it back, returned  without limbs, many were burned and many hold deep scars within that need much help, the kind of help that caring and appreciation along with time can only heal.
I am reading articles and comments that are anti veteran and wounded warrior that cause me to be ashamed for all the Cruz, the Becks, the media whores and all those that claim to be American and are acting like heathens because they are supporting a guy named Cruz and somehow believe this will help him win.  I don’t see that coming from Rubio supporters, nor do I see that coming from Carson supporters, nor Huckabee, nor Santorum, nor Fiorina, nor Christy, nor Paul, not even Jeb Bush supporters. It is a crying shame that the Cruz so- called conservative, constitutional loving Christian supporters have turned out to be such dam hateful hypocrites.
Let me tell you all, as a Trump supporter I don’t go out trolling Cruz sites to see what trouble I can stir up, I don’t go trolling Hillary or Bernie sites either.  I do defend my Trump from lies, as I am doing right now.  But I won’t shove this under your nose.  You will find it on a Trump friendly site. I would love to make sure every one of you read it, but forcing people to do things isn’t how Trump supporters roll.  We do what is right in spite of what we’d like to do in the heat of the moment.
To throw distain at a man, Mr. Perlmutters, because he gave a million dollars to veterans, and to condemn him and slander his name because he is a friend of Donald Trump is disgusting.  To help destroy the mans reputation because Salon has accused him of racism and gender inequality for supporting Trump shows a mob mentality that is far from anything even vaguely associated with our Lord.   Because he happens to own  Marvel Cinematic Universe and Marvel Comics, Salon has called for Cruz supporters and others to boycott  his business.   Well how about a boycott on Salon, don’t read their lies and spread their garbage.
Salon, a left wing liberal news outlet, states after a long list of lies about Fox news, Trump, a house he bulldozed down- that he never did, etc.,  in an effort to have Perlmutters unendorse Trump, “progressives have the power to compel Marvel and its business allies to change its racial and gender attitudes.”  So all you Cruz supporters who are high fiving do you realize you are supporting the progressive agenda?
Trump has done more to unite America than any one person in recent memory. The actions of Salon and those who are supporting such hate speech and spreading other lies listed in the article below (see link) are repulsive.  There are no gender attitude issues in the Trump camp but there are plenty stirring from the left in all their hate propaganda about Melania which they are also spewing. As well as every female supporter of Trump. Not to mention the insults their entire argument has directed at our veterans and wounded warriors.
Why on earth would conservative groups with so called Christian Cruz supporters be posting hate filled left winged progressive rhetoric from Salon, saluting it and cawing at its words with ten hail Mary’s and twenty high fives.  You should all be fearfully ashamed.
I said a while back that I felt this election was also a gleaning of sorts for God’s people, a separation of those who are his, and those that think they are his.  Kinda like the scripture where it says, “Didn’t I do this and that…”  and the Lord says, “Depart from me, I never knew you.”
https://www.breitbart.com/entertainment/2016/01/30/marvel-ceo-ike-perlmutter-blasted-1m-donation-trump-vet-fundraiser-salon-calls-boycott/
Dianne Marshall