P2 Personal Training rises to the call with “G-Force Training” – a new veteran’s program geared toward fitness and wellness coaching for Disabled Veterans. Suicide rates from veterans suffering from PTSD are rising at an alarming rate –and that is not acceptable.

Patty Cummings, owner of P2 Personal Training, and CEO of Astro-Durance Bungee Systems, recently started a fitness and wellness coaching program to help disabled veterans in Cape Coral, Fl. The program titled “G-Force Training”, empowers Veterans to help other disabled Veterans get back on their feet through exercise and deals directly with PTSD issues. Patty has a small team of volunteer medical, health and fitness professionals who donate their expertise and guidance to the new program. Her goal is to create a private sector movement of people sponsoring this proto-type of “empowering Veterans to take care of Veterans” in communities across the nation. 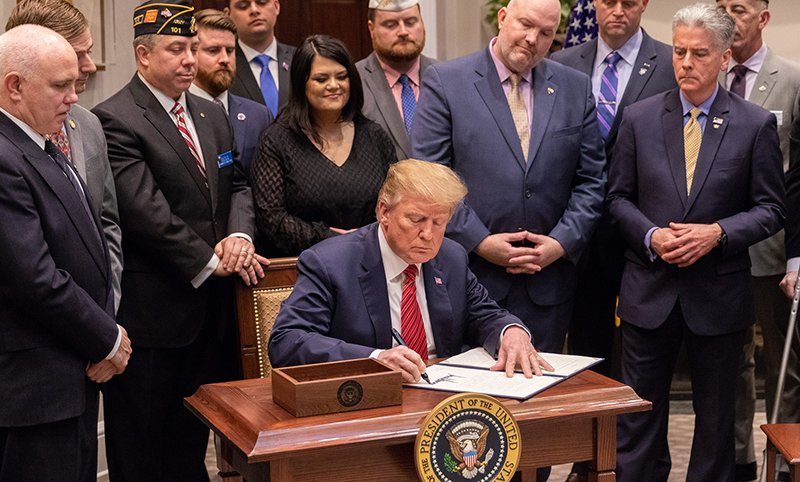 “Just a few moments ago, I signed an EO addressing one of our nation’s most heartbreaking tragedies: VETERANS SUICIDE. To every Veteran—I want you to know that you have an entire nation of more than 300 million people behind you. You will NEVER be forgotten. We are with you all the way.”
President Donald J. Trump

P2 Personal Training and the “G – Force” Fitness and Wellness Coaching Program is a private sector community-based outreach program that deals directly with the disabled veteran in need of help. When a person is hurting they need help at that moment; not a month, 6 months or a year down the road when all the red tape and paper work is in place. Patty was excited to hear the news that President Trump signed an executive order that was along the same mindset.

According to an article By NIKKI WENTLING | STARS AND STRIPES, Published: March 5, 2019; the “PREVENTS initiative”, short for the President’s Roadmap to Empower Veterans and the National Tragedy of Suicide, includes the secretaries of Veterans Affairs, Defense, Health and Human Services and Homeland Security. Over the next year, the task force will be responsible for working with public and private sectors to better understand the underlying factors of suicide and plan methods for addressing it at state and local levels. The White House plans to provide grants to state and local governments to support the initiative.

Part of the initiative will put focus on reaching veterans who don’t use the Department of Veterans Affairs. According to the latest VA data, 20 veterans die by suicide every day. Of those, 14 are not receiving VA health care.

Suicide among veterans continues to be higher than the rest of the population, and younger veterans are particularly at risk. New VA data released in September showed the rate of suicide among veterans ages 18 to 34 had significantly increased. For every 100,000 veterans in that age group, 45 committed suicide in 2016, the most recent data available.Click to read full article.

Trump signed the order Tuesday, March 4, 2019 at the White House, surrounded by representatives from a dozen major veterans groups. One of them, AMVETS, issued a statement supporting the new task force but asking for more urgency as the Cabinet members create their roadmap.

“It… begs the question of what steps our government will take to actively curb veteran suicide while this blueprint is being developed over the next 365 days,” the statement reads. “If the statistics hold true over the next year, over 7,000 lives will be lost before full implementation is realized. The reality is ‘crisis’ has no patience, and neither should we.”

Patty Cummings at P2 Personal Training agrees with AMVETS 110% and hopes to show others how to help the veterans today – NOW – RIGHT NOW.

“It’s great that funding and support is getting organized but people need help right now. That’s what we are all about. We started developing our program 6 weeks ago modeled off of what I do every day to help clients exercise who have physical limitations. 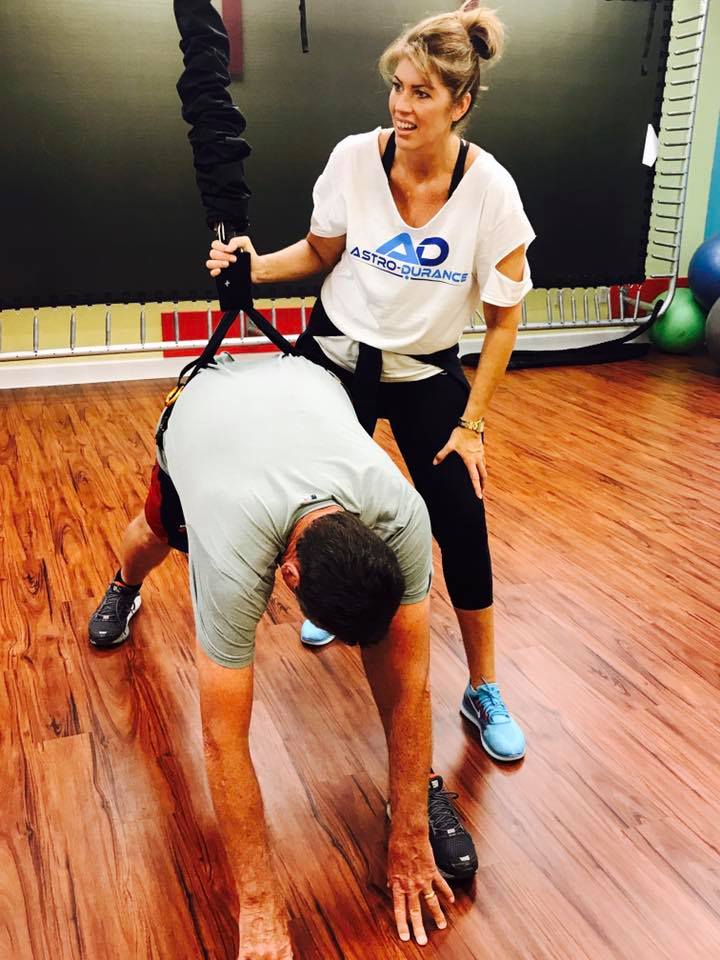 “I developed a product to help people with physical limitations to exercise with no pain on the joints. The goal was to get static clients moving so the blood and lymph could get pumping so they could receive the benefits from exercise. What I found was people were revving their cardio in seconds, burning fat fast, increasing strength, endurance, improving flexibility and balance without pain on the joints. Their moods shifted and they were laughing, having fun, and looking forward to getting on the bungee for exercise training. They felt alive again. My Astro-Durance Bungee Fitness and P2 Personal Training Facebook group pages and Astro-Durance Bungee You Tube channel is full of live testimonials

“Chiropractors, Doctors and Physical Therapists were excited to see the improvement in their patient’s conditions and told them to keep doing what they were doing.

“Fast forward to one of my clients whose 10 year- old son with Cerebral Palsy, had improved greatly over the last year and came running in for his appointment and proud to tell us all he made the football team as wide end receiver. As his dad and I talked I was shocked to learn that he suffered from a brain injury from IED’s (improvised explosive devices) during his ten years in active duty and suffered from PTSD. He never said a word about it. I asked why he didn’t say something and his answer, “You already do so much for my son. This last year you helped him so much, I would never ask, hey, can I get on it too?” You see, I love helping others and his son was one that I didn’t charge. The son was originally gifted sessions through a foundation and when that was up, they were going to have to stop due to finances. I knew his dad was unemployed but I thought that was because he was the care giver to his son. I never knew he was disabled. He is a perfect example of one who appears fine, but is in a lot of pain with his neck, and vertigo from brain damage. He is a young man of 34, with four children, one with Cerebral Palsy. We talked and I learned a lot about PTSD, the veterans who live in the woods, and things I had no idea were happening right here in Cape Coral, Florida. I had no idea of the high suicide rate for PTSD.

“It was at that moment that I knew I had to help Veterans. I had the product that would get blood flowing throughout the body and to the brain organically and without adding pressure on the joints, pain free. The science behind Astro-Durance Motion-based Training is in the “G-Force” created on downward movements with resistance cords bouncing you back. It gives the person weightlessness and allows all the muscles to stretch. I call it angel wings for their workout. For both athletes and people with physical limitations it’s a training that revs the cardio in seconds, burns fat fast, increases strength and endurance, improves flexibility and balance, increases blood and lymph flow to get oxygen flowing to the brain. When this happens the oxygen mixes with a chemical called “BDNF” brain-derived neurotrophic factor that plays a vital role in brain cell growth, mood regulation, learning and producing key hormones like Serotonin, which boosts our mood; Dopamine, which affects movement and emotional responses; Norepinephrine, which influences attention, perception, motivation, and arousal, along with other beneficial chemicals that produce antioxidants like glutathione.”

The G-Force Training Program allows others in the community to buy and gift session packages to veterans who need the program.

Sen. Jon Tester, D-Mont., the ranking member of the Senate Veterans’ Affairs Committee, said the Presidents EO was a “step in the right direction, but urged that we all have to keep taking an all-hands-on-deck approach when it comes to efforts to expand veterans’ access to mental health care and to improve our nation’s suicide prevention efforts.

Tester announced he was drafting legislation also aimed at suicide prevention. The bill aims to support servicemembers as they transition from the Defense Department to VA health care. It would also increase veterans’ access to remote health care, “cut the red tape” at the VA and vet centers, and invest more money into treatments such as yoga, animal therapy, meditation and acupuncture. Patty looks forward to contacting Jon Tester, about her “G-Force Training” program and hopes he will initiate the model in his home state of Montana. To find out more about the G-Force Training Program, or how to start one in your community, contact Patty Cummings at P2 Personal Training, 324 Nicholas Parkway West, Cape Coral, Florida 33991; Phone: 239-574-4291, or email Patty at: pattyc@astrodurance.com 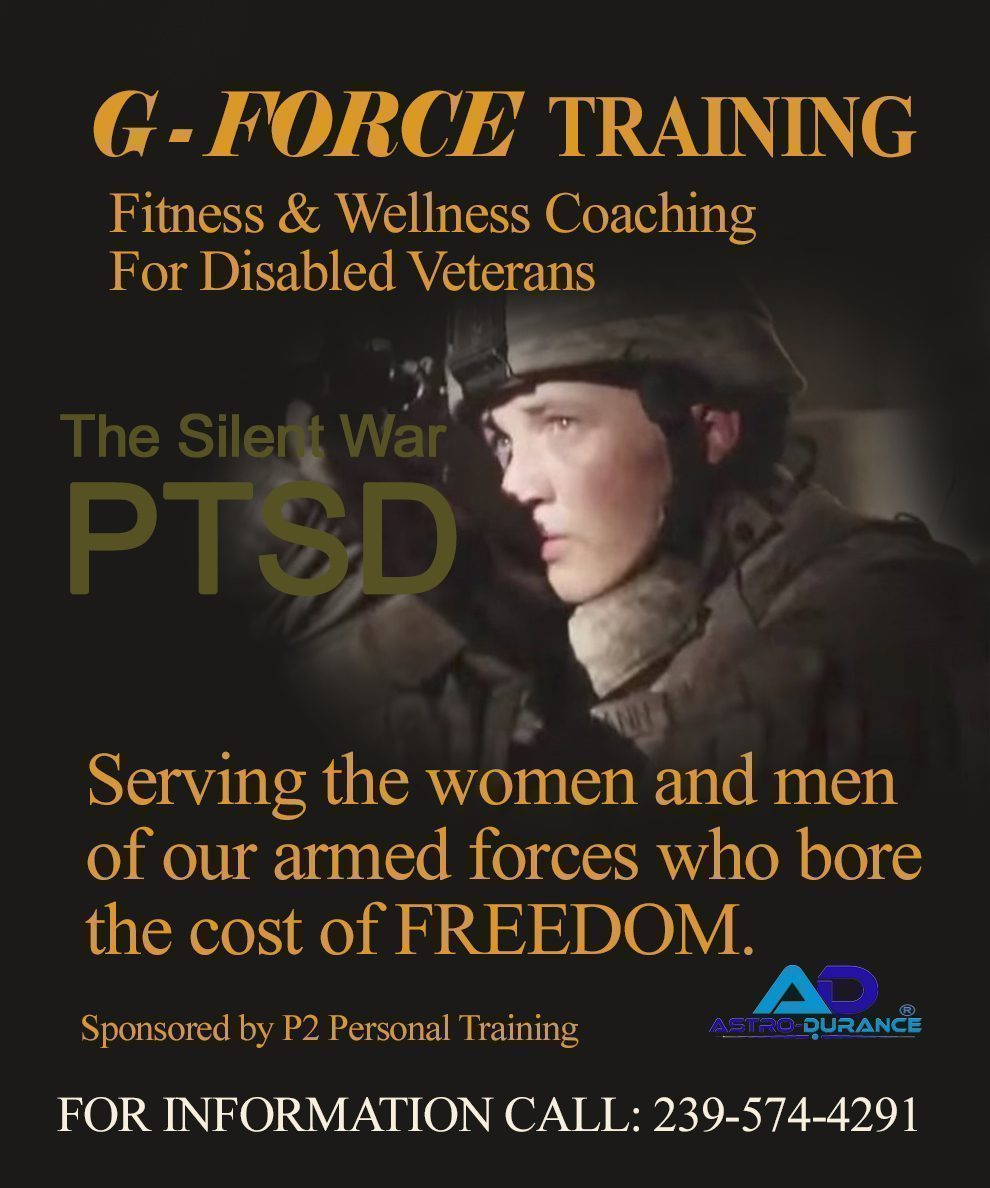 Veteran Sponsorships
Astro-Durance Bungee Systems was designed to help all people with physical limitations to fulfill their doctors prescribed recommendation to exercise.

Those with disabilities need a personal trainer and sometimes two. There is a big need to help disabled veterans exercise pain free with special programs for PTSD. P2 has put together a pro bono program to help Veterans and is willing to share their project concept with other communities across the USA.  Communities can help support their own G-Force Project locally by gifting a session or a package to a Disabled Veteran for “G-FORCE” TRAINING.