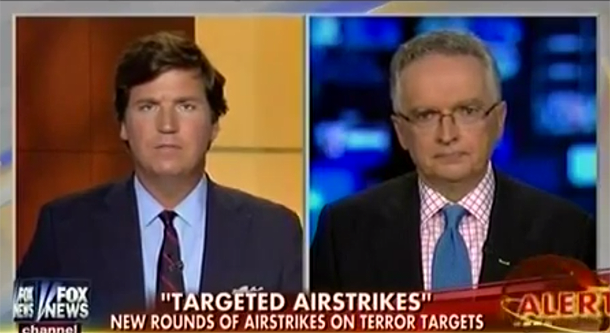 Who in the heck is Lt. Colonel Ralph Peters?  He spoke with Tucker Carlson on Fox tonight and he was way out in left field dissing Syria and President Assad.  He was all on board for toppling Syria. Tucker urged Peters to look at the record and see that Assad and his father kept the region in tact with a great number of  multiple ethnic and religious groups. Peters barely nodded at that fact before he launched into more reasons why we must topple Assad.  He clearly showed his war mongering. None which held any weight against the true facts pertaining to the region.  Only lies that support a false war mongering façade.

Well, at least Tucker was the grown up in the room with hard and real facts and not a fictitious laid out drama program designed by Obama, Kerry,  McCain and other war mongers hell bent on starting world war III. Lt. Colonel Ralph Peters is wrong, flat out wrong and it is obvious he is an Obama puppet doing the dirty work to try and justify an all out slaughter or America’s finest specialty trained troops.  It is just too dang bad, isn’t it, that Americans know better and understand what is really going on and what Peters is doing is terrible.

Peters is shouting lies that only have legs with the lies of main stream media.  The facts knock the real legs right out from under the lies.  When will we demand not to have liars take to the main stream news?  Hopefully Tucker Carlson’s soft truth will somehow permeate through the liars list of junk they expect us to buy. I for one am  NOT BUYING ANY CRAP – ARE YOU?