LITTE RUBIO IS FINISHED! HE SUPPORTS ANTI-COP RHETORIC OF BLACK LIVES MATTER! - The Marshall Report Skip to the content 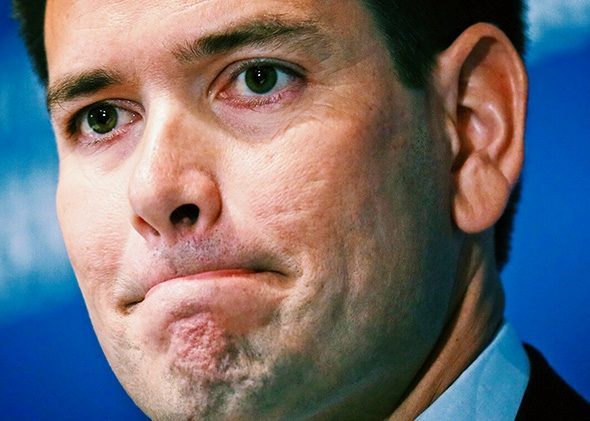 If all the other illegal immigrant gang of 8 underhanded low blows to Americans didn’t sink salt back Rubio, his new take on ‘BAD COPS”, “white racism”, and support for “Black Lives Matter” just might do him in the rest of the way.  It looks like Rubio might be going where the free cash is.   Left wing campaign dollars paid upon siding with protest groups funded by George Soros bucks?  Well George is always looking for ego driven new recruits, and Hillary is looking a bit ify?

On a Megyn Kelly interview in August Rubio talked about Black Lives Matter and the spokesman for the organization, DeRay McKesson  liked what the anchor baby had to say and asked Rubio to have a meeting with him.

Rubio said, “This is a legitimate issue… It is a fact that in the African-American community around this country there has been, for a number of years now, a growing resentment toward the way law enforcement and the criminal justice system interacts with the community… I have one friend in particular who’s been stopped in the last 18 months eight to nine different times. Never got a ticket for being stopped — just stopped. If that happened to me, after eight or nine times, I’d be wondering what’s going on here. I’d be upset about it. So would anybody else.”

At a Detroit Economic Club meeting in August, Rubio was asked about police shootings, and stained relationships between minorities and law enforcement, Rubio legitimized their sentiment that white racism was holding blacks back. He stated:

“We can’t ignore as a reality that in many communities in this country, the relationships between minority communities and the police and law enforcement are terrible… We can’t ignore that this country does have a legacy of racial discrimination… Listen, 60 years ago– 50 years ago, it was legal to discriminate against people because of the color of their skin. This doesn’t just go away over night. You can change laws, but the impact of that remains. This is a legitimate issue. We need to confront it as a nation.”

So far this year 27 police officers have been shot dead, and Black Lives Matter groups have protested shouting things like “Pigs in a blanket fry’em like bacon.” They have rushed into private businesses and restaurants shouting other chants and disrupted other peoples rights to enjoy their own liberties.  So if Rubio thinks this is all okay and a cause he wants to back, then let him step down now and hit the streets. He isn’t going to win the primary and he has already quit the senate….so I say go join the group and good riddance. We don’t need a new Al Sharpton.