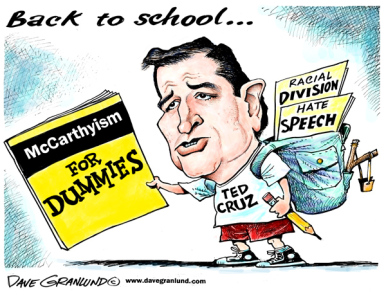 Will someone tell Rafael Cruz what the 9th Commandment says?  It clearly states – “Thou shalt not bear false witness!”
I am tired of the Cruz to lose minions telling lies and calling the Trump supporters who tell the truth about what is really taking place liars.
“The truth shall set you free” is not a motto….it is scripture.  We now all know who is the wheat and who are the tares.  Trump is wheat! The Beck and Cruz testimonials are tares, tearing apart America.
This crazy public display reminds me of the Biblical scripture of Solomon and the two women who had a child that was smothered in the night and died. Their was one surviving child they both argued they were the true mother of and went before Solomon for him to settle the matter.  After hearing them, Solomon was ready to slice the child in half and give a half to each and the true mother threw herself over the babe and said to let the other woman have it rather than kill it. The other woman shouted -“No divide it in half!”  Solomon knew instantly the real mother was the one who threw herself over the child and gave the child back to its’ real mother.  Therein lies the real truth and this is what we are all watching.
Cruz has yet to prove he is a true citizen of the United States of America.  It’s time he do something more than claim he is because he said so, and ready to rip her apart with Beck on his way down!!
STAND WITH DONALD J. TRUMP!
Dianne Marshall