Amazing progress for this veteran, and former NASA engineer,  who was running out of time to get his prosthetic leg.  After 8 months at home doing professional physical therapy to recover from his leg being removed through surgical amputation, Ray could not even pick up a piece of paper without his shoulders hurting, and could not put any pressure on his good leg.

In just 3 sessions at P2 Personal Training in Cape Coral, Florida on the Astro-Durance Bungee Systems, Ray is able to pull his body weight with no pain on his shoulders  and his good leg is building muscle!

Watch Ray’s first session: After 8 months of no progress, Ray is able to put his body weight on his leg with Astro-Durance Bungee assistance.  His posture is straight, which is another thing Ray could not do.

Ray smiles and looks forward to his workouts that are pain free and result oriented!  Ray’s progress has proven that ASTRO-DURANCE BUNGEE – “MOTION BASED EXERCISE” builds muscle!  Motion based exercise is the concept of expanding and contracting the muscles without putting pressure on the joints by assisting the body to do what it can not do on its’ own with bungee cord assistance.  It is the key to rebuilding muscle strength!  You don’t actually have to pound the pavement and add harmful high impact on the joints!  “No pain no gain” is yesterday’s motto, today it is “WE GAIN NO PAIN!” AND IT WORKS!

Watch Ray before his 3rd session showing off what he can do now, after only two sessions at P2 Personal Training with owner, and developer/creator of the Astro-Durance Bungee Systems, Patty Cummings.

There are so many people that need this type of painless rehabilitation.  Astro-Durance Bungee Systems is truly the future of fitness for all ages, sizes, fitness levels, and physical limitations! It is made for everyone.  Whether you are a body builder looking to rev up the cardio and build your core, or like Ray, looking for something to build muscle so you can have the strength to walk again- Astro-Durance Bungee Systems MOTION BASED EXERCISE will help you do it fast!

Ray came to Patty Cummings to try her Astro-Durance Bungee Systems at P2 Personal Training P2 Personal Training Facebook after a lot of encouragement from his friend Al. He had his leg amputated in January of 2017 and has been undergoing on going physical therapy to build muscle strength so he could be fitted for a prosthetic leg.  He had not been able to make any progress and muscle continued to atrophy instead of build.  Mainly because he was not able to put any pressure on his leg, no matter what they tried.

Ray’s time was running out, as he only has until September 28, 2017 to build muscle strength or he is not going to get his prosthetic leg.  With only 5 weeks remaining, and muscle atrophy so bad he could not even straighten out his leg, let alone put pressure on it, the future looked very grim. 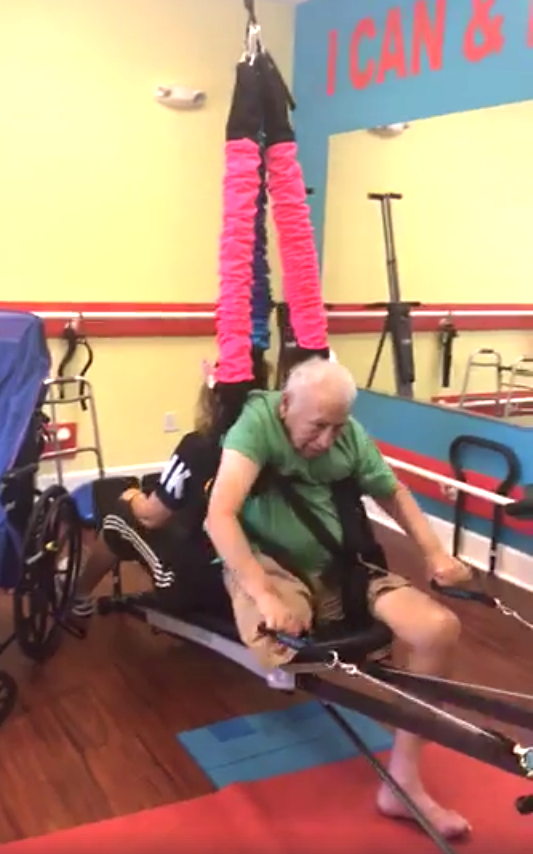 But now that grim scenario has all changed.

With nothing to lose, Ray listened to his friend Al, and went to P2 Personal Training to try the Astro-Durance Bungee Systems.  Now, in three sessions (barely a week), he has a smile on his face and renewed hope.  It looks like he is going to reach his goal before September 28th!.  His muscles are building, and there is no pain when he exercises, nor after.  Cape Coral, Florida residents are rooting for Ray and watching each day as he progresses and gets stronger and stronger.  After watching Ray’s video’s, please give him a like!

ASTRO-DURANCE BUNGEE SYSTEMS are available for purchase for your fitness or rehabilitation facility.  The unique feature is there are no franchise fees, no royalty fees, and lots of customer support.  They have an advanced online education and certification program for Astro-Durance Bungee Systems available www.astroduranceeducation.com
Astro-Durance Bungee Systems are made in the U.S.A., and have developed a special entrepreneurial start up opportunity for veterans!
If you have an existing facility that you want to add Astro-Durance Bungee Systems in, or are looking at opening up a new facility, you can find out how to get started at astrodurance.com .  They have a technical support team that can answer your questions and help direct you.