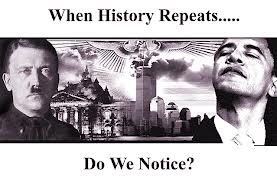 Can someone explain to me why it is when I hear Donald Trump speak I get the feeling I am listening to the real president?  The real man that is representing America?  Why is it when I even see Obama I have an evil pit in my stomach and can’t stand to hear his vile words?

It is what it is.  We have no president in office representing the people. What we have is an abomination leading America to it’s ruin.  He is beginning to lose his grip on his bad mouth against us, even with all the media channels.  Could it be that even those who have been bought and placed in media jobs are looking at their lives?  Their children and family lives?  Are they starting to see where this is all going?  Or is this just for show?

Where are the power players who can remove him?  Congress is not acting, the military is not acting?  What does America do at this point?

Is the news ramping us up for a revolution…or is the news actually believing what they are saying about Obama not caring about America?

Those who know truth do know that Obama has been destroying us from within and he and Hillary created ISIS.  Along with McCain and other people and branches of government.  So what do we do?

That is the question and will we act on our options?