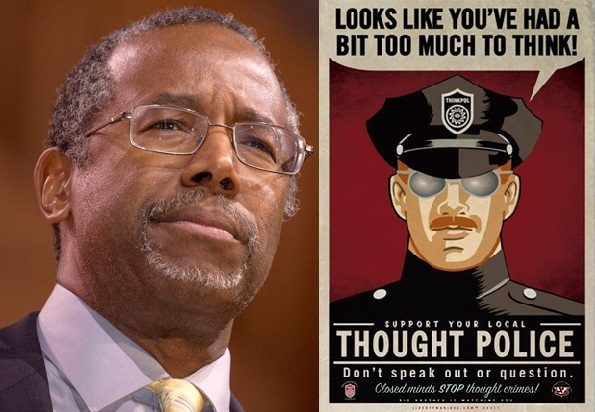 I have had it with these idiots that want to be president but know nothing about international law nor a failed foreign policy, nor what the heck is going on overseas.

Carson just showed his stupidity along with many other fools hollering no fly zones!  I guess they have heard McCain, the warmonger, holler STUPID STUFF so much they think it is the cool thing to say.  They have no clue as to the laws of NATO or what an act of war is or is not. These are all complete idiots and fools. They lead only other idiots who have no knowledge of international laws. Complete baffoons.

From the article: “Wednesday on the ‘Simon Conway Show”, Republican presidential candidate Dr. Ben Carson said the United States should establish a no-fly zone at the Turkish-Syrian border and shoot down any Russian plane that enters it.

Carson said, “If they do come into that area—after you have given them adequate warning, after we’ve talked to Putin—you shoot them down. Absolutely.” he added, “Whatever happens next, we deal with it. But we can’t continue backing down because in the long run, that will hurt us.'”

First of all what happened to diplomatic diplomacy and respect for sovereign nations? Syria is a sovereign nation. Russia is there at Syria’s request.   Second of all – how long are we the people going to have to listen to stupid things coming out of the mouths of these frogs?  Third of all and most sadly, many Americans will listen to this complete idiocy and agree. Why?  It is because,  as Carson should be aware, a major folly of Biblical proportion.  “My people perish for lack of knowledge.”  and as the good Lord himself said, “The blind shall lead the blind and they shall both fall into the ditch.”

So, all you  Americans that choose to  follow idiot Carson and be as blind as he, please don’t ask for help when you land in the deep ditch he is leading you into.  Lay there and deal with it then.

Here is a well known fact among nation leaders, but obviously little known to the people, when a nation declares a no fly zone on another nation, that is an act of war.  You don’t go talk to Putin when you declare a no fly zone on nations that are not his.  What an idiot!!!

So when you force your will and/or shoot down the plane Carson,  you are officially at war. At that point there is no asking Putin anything…and then at that point, as you said, you deal with it! Only in this case, America will have to deal with your frigging stupid idiotic ideas and lack of wisdom, and lack of everything you stupid bag of wind, with you! Might I suggest to please just do America a big favor and  go home now?

You have more than proven you are unfit to be commander in chief and there is no malpractice insurance available to protect a poorly skilled president. There are no second chances to get it right.  Please take your place in the “We Be Sisters” bowel of stupid then sit down and shut up. Thank you. That is the biggest favor you can do for God and country.

Please click on the link and listen to the video.  It is obvious Simon Conway, the interviewer was laughing to himself as he told Carson, we get straight answers from you, (as stupid as they are) and Carson proudly states, “That’s because I’m not a politician.” and  Conway tries not to laugh as he answers with a smile in his voice, “I know isn’t it great. I’m talking to a bunch of them now and getting the same answers….”