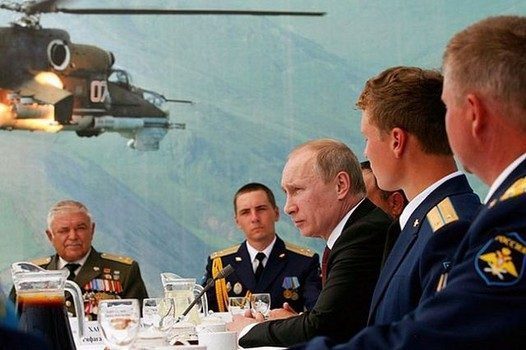 Putin’s message is clear to the western world. He is ridding the Syrian area of all the terrorists the west has, under Obama’s leadership, sent into the region to kill Christians and topple Syrian President Assad.  Putin is not letting up and all systems are go for “Operation Salvation”.

Moskovskaya Pravda cited the Russian president as saying, “We have nearly two million orthodox Christians in the Levant—Syria and Lebanon— and approximately 5 million Christians across Middle-East. Regardless of America’s presidential election outcome, White House craves chaos in that oil-rich region by supporting fanatic Islamist organizations, i.e. ISIS and al-Nusra Front.”

The establishment elite’s game is over.  Putin is flexing his muscle against ISIS/ISIL aggression and ridding the strongholds Obama has created in the Syrian area.  Meanwhile the western media continues to tell the people Russia is the enemy.  Yet, the western world is sponsoring the terrorism that is killing Christians in an Islamic ethnic cleansing.

Meanwhile the west is holding firm in their propaganda that the problems in Syria have caused a refugee crisis and continues to send it’s healthy young adult men with fresh cut hair, brand name clothes and clear voices that shout Allah Akbar throughout Europe and the United States.  The refugees have been being sent since the crisis began and is now clearly  seen by many European nations as a Trojan Horse mandated by the western controlled UN refugee agency’s mandate.

The UN Refugee Agency, is  a United Nations agency mandated to protect and support refugees at the request of a government or the UN.

While the refugees shout Allah Akbar, Putin has declared, “It is morally incumbent upon Russia to change this terrible status quo in the Middle-East. Prepare for operation ‘Salvation’ and with God almighty’s aid , we shall cleanse Syria from Obama’s ruthless terrorists.”