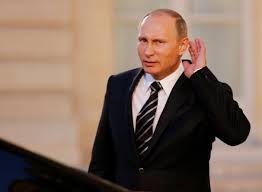 Little boy Rubio is playing World of Warcraft on his Xbox and has lost touch with the real world.  He is now calling for war with Russia in order to help Obama and Hillary’s fake war with Syria to capture the ISIS that Obama and Hillary created in order to have their fake wars in the middle east and spread their Islamist extremists throughout the world.

Now he is calling for a no fly zone over Syria.  Most people have no idea what a US mandated no fly zone even means.  In a nut shell no one can fly over Syria, not even Syria.  So Syria would be a sitting duck, the same as Gaddafi was when the US called a no fly zone over Libya.  He could not stop insurgents from coming into Libya.  It basically crippled his air defense and rendered his airforce useless.  So Rubio is wanting to do the same to Syria.  That is a gross action of war and an invasion of another country.  In short it is an act of war.

When asked if that would start a war with Russia Rubio didn’t really care.  When asked if the American people would be afraid of that action, he said, “Sure. But the consequences of not doing anything would scare them even more and that includes its ongoing crisis of the migratory crisis that we’re now facing.”

Will someone tell Rubio this migratory crisis we are now facing is manufactured by an evil foreign policy to create chaos in the world.  Or does he already know that?

Putin spoke on this brilliant type of American reasoning at a press conference a while back.  Here is what he said about the western Rubio style of thinking.

“You cannot “squeeze” others having considered only the benefits that you require from whatever… in economies, in your military activities, in everything. Look at Iraq the situation is terrible. Look at Libya and what you did there, that got your ambassador murdered.

Was it us that did this?

You even had a security council decision to establish a no fly zone. What for? It was so that Gaddafi’s air force couldn’t fly over and bomb the rebels. This wasn’t the smartest decision, but okay… what did you proceed to do yourselves? You started bombing the territory. This is in clear contravention of the security council resolution. It is even outright aggression over a state. Was it us that did this? You did this with your bare hands.

And it ended with the murder of your Ambassador. Who’s fault is it? It is your fault. Is it a good result that your Ambassador was murdered? It is actually a terrible catastrophe.

But do not look around for somebody to blame when it is you making these mistakes. You must do the opposite; rise above the endless desire to dominate. You must stop acting out of imperialistic ambitions. Do not poison the consciousness of millions of people like there can be no other way but imperialistic politics.”

Rubio is a little boy in his thinking.  He has no logic but that of a 12 year old on an Xbox.

He needs a big reprimanding and Florida needs to recall him now, or waste a full year of no support for their constituents.  Recall your little fake Tea Party rat now.  For the good of the nation.  He is done and so are his establishment puppet masters.

One more thing Putin has said that most Americans do not know for our media will never tell you.

““Researchers of many U.S. universities, they are writing about the ineffective and costly U.S. foreign policy.  And I know very well how this foreign policy is applied to the so called European allies.  So they made a decision on Afghanistan.  Did anyone even think to consult the allies?  About what to do in Afghanistan?  Hell no! They delivered the first blow and then started rounding everyone up around them. “If you’re not with us, you’re against us.”  Is that cooperation in their view?  Cooperation per se does not exist.” “If you’re not with us, you’re against us!”  Brilliant logic…  Then all of a sudden you have a break down in relationship, difference in opinion.  We do not intend to exist a country that is surrounded by enemies.  That will never happen.”     Vladimir Putin

Read this and weep….he is an idiot on foreign relations and stupid on his information.  The problem is he is talking nonsense to an informed people.  Only the illegal immigrants have no idea that he talks nonsense. The global governance goal is to create world chaos and usher in their new order that is not anything resembling a free world.  So let it be known that little boy Rubio is merely a very ignorant puppet.  He has no business sitting anywhere near the oval office nor the senate.

Rubio is dangerous to himself and the entire world. Read more here: https://www.breitbart.com/clips/2015/10/10/marco-rubio-urges-attacks-russian-aircraft-syria/

Read more on Putin and the middle east and the western world here: