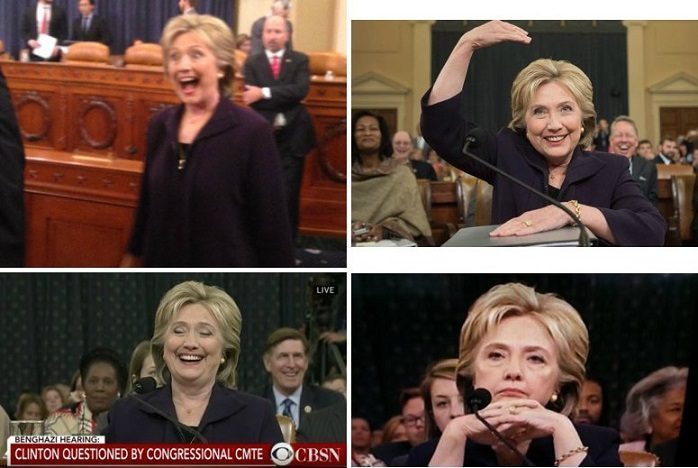 The entire Hillary get out of jail free card is based on blackmail, of which she is much better at than email.  If people do not understand by now that the establishment is in bed with the Bush’s, The Clintons, The Obama photo shopped family, the GOP and the DNC, along with the Soros, the Rothschilds, the Kissingers, the Rockefellers and all who are for NWO governance….you will never see the entire picture for what it truly is.  A big web of deceit against all those that are pacified with an idea that the constitution will one day be enforced and not continued to be executive ordered into nothing.

So you see, if Hillary goes down they all fall like dominoes.  And they will never let that happen.  Therefore, justice will have to take a different approach other than our corrupt legal systems.

Benghazi implicates the entire White House situation room and all who were sitting in it.  And of course Jarrett….not to mention the tentacles that reach over seas and at the UN.  It is a sustainable development agenda 21 club all covering each other’s back.  One can just follow the trail of the high military brass that were demoted, gag ordered, or in other ways removed from their posts.  The entire event was a gun run gone bad.  The entire CIA, ISIS moderate Islamists are our friends fiasco has been a big design to bring about the exact world crisis against the Islamist extremists that we are now witnessing. Or should I say that the rest of the world is witnessing as our main stream media is almost silent on the entire subject and when they do they skew it and push the same foreign policy that created the situation.

They are about to create so much chaos in the world that INTERPOL will police Germany and other European nations like Hungary, Sweden etc.  And of course the news did tell you INTERPOL  is now policing the cities that signed on for the Presidential Task Force for 21st century policing didn’t they? No they did not!  Those cities are now called “STRONG CITIES” .  Among those that are currently partaking in the new program are Ferguson, and Baltimore.   Pretty much you can look for all the sanctuary cities to become “STRONG CITIES”.

And when our non English speaking refugee mercenaries start getting angry, as they will….expect the government to step in and let INTERPOL TAKE OVER.  After all they have been working with the FBI for a while now anyway.  So….it is here.  They just haven’t told you.  When they do and you ask Hillary just expect one giant cackle!  That will be your answer.

Meanwhile, Putin saw this all coming and last Thursday he spoke on the crisis at the Valdi Discussion Club in Sochi with western journalists present. He spoke out on the NWO global plans to do all I mentioned above, as well as reporting all the sins of the US failed foreign policy.  He isn’t going to just sit back and watch.  It is about to get real more than anyone knows or believes. Putin is not starting any wars, he is defending the nations that are under attack, and calling out the attackers.

It was clear that at the Benghazi Hearing the following were definitely discovered.  What comes from any of this and the other worms in the can that could be nailed will be determined.

2) Barack Obama went to sleep knowing that a U.S. Ambassador and other Americans were under terrorist attack.

3) Barack Obama awoke refreshed the next day to begin fundraising.

4) The entire Executive Branch lied repeatedly to the American people to save Obama’s chances for re-election.

(There are more, but these cannot be disputed.)