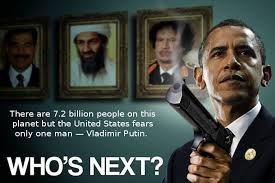 Since when is killing nation leaders and toppling regimes Democracy?  Does the world feel safer knowing that the bully who has the most power can topple who they choose and have no consequences?  What will happen to the bully if other strong nations banned together and said, “ENOUGH IS ENOUGH!”

Will the bully run and hide?  Will he say, bring it on?  Will the bully lie and say he was the one being bullied?  What will happen?

Well, if you haven’t guessed it by now, I am talking about the U.S. bully, the one that has made it their mission to rid the world of terrorism, and in the process terrorized the world. They call it foreign policy.

Imagine for a minute with me here…what if China decided they didn’t like Obama.  They decided he might use his weapons of mass destruction on his own people or Mexico, worse yet unleash them on the world?  So they decide they must be preemptive and strike America with some space based missile program?  Imagine that Obama bunkers down, meanwhile the east and west coast are obliterated and the Midwest is being bombarded.  Imagine other nations join China to rid the world of the USA regime that has weapons it may use to destroy its’ own people and other nations, and pledge to continue strikes until they get Obama who is hiding in the underground bunkers.

The goal is to rid the world of the evil Obama, so US civilians are nothing more than collateral damage, after all USA only has around 330 million people of the 7 billion world population….they are only a fraction of the bigger focus which is to protect the lion’s share of humanity.  Would you see that as the right thing to do in order to make the world a safer place to live in peace?

I can see that scenario quickly becoming a possibility.  Especially if the US does not change it’s foreign policy agenda 21, which is presently to do unto others what they would not want done unto them.  The world is opening its’ eyes and about to say ENOUGH IS ENOUGH.  The puppet masters who desire their new world order are nothing more than the great merchants of the earth, who by their sorcery were all the nations deceived.

I do believe our only saving grace is twofold,  first God is with those he is trying to awake, and second- the nations know that Americans have been duped, poisoned, and depopulated by the same policy that has fallen on the world. They know we have been pitiful sheep led to the slaughter by the domestic version of the same foreign policy and agenda 21.  I also believe the world has been praying for us to awaken from a deep propaganda induced sleep.

I ask all Americans to please consider the failed foreign policy of the US and imagine what possible end goal this policy was designed to really achieve?   If your eyes are opened, will you do the right thing and help expose this world Tyranny before it is too late?