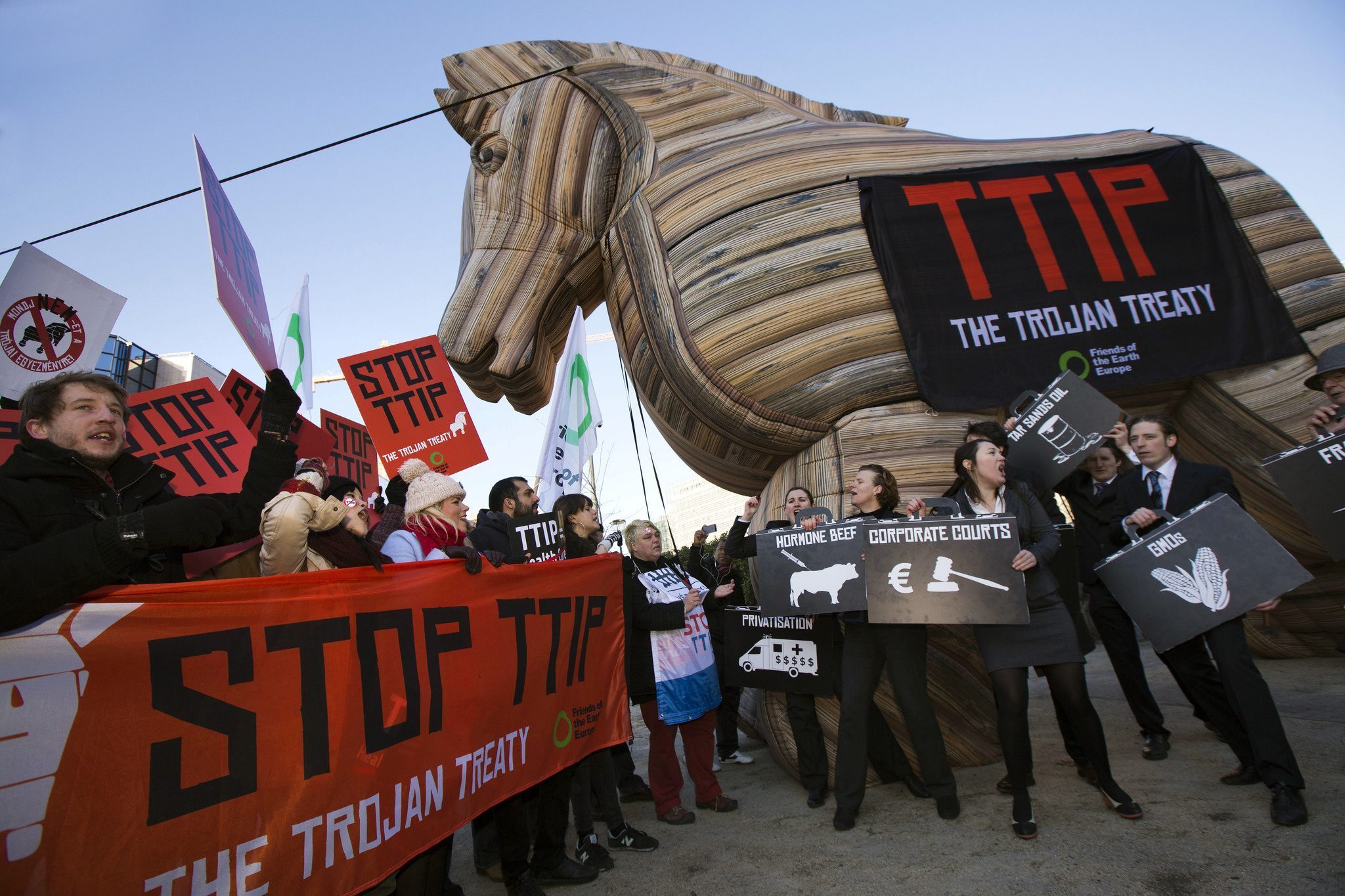 For those who thought TTP (trade act) passed in congress to just talk about it for the next six years – think again.  The  UN establishment elite is currently being negotiated among the nations as we read this article right now.  The elite have been pushing their agenda designed to play the biggest self serving favoritism for their monopolies that would make the early industrial Titans pale in comparison.  Ironically, most all the elite are the descendants of the very same. The end goal – one world global dominance by the same 1 percent who own everything.

That is the most simple and easiest way to explain it.  But now what they are doing is taking their global model to new heights of control.  Now you will have no choice and no course of legal action against any of these global titans, if they have their way.

So it is not just America who is at risk.  It is every nation on the planet.  Germany is the first to band together and protest this system on a very huge level.

This is what a German online newspaper is saying about it:

“It’s called TTIP, Transatlantic Treaty, and if it goes into port we are ruined. To decide on everything – work , health, food, energy, security – no longer states but directly multinationals. Their super-consultants, through lobby omnipotent as Business Europe and Trans-Atlantic Business Dialogue, in these months are dictating their terms to the authorities in Brussels and Washington, that within two years count to transform them into law. At that point, the democracy as we know it will be technically over: no state authority, in fact, will dare to oppose the dictates of this or that corporation, for the mere accusation of having caused “loss of profits” will expose the nation-state – the government, the judiciary – the risk of paying penalties salty. Already, many states have had to pay $ 400 million to multinationals. Their “fault”? Banning toxic products and introduced regulations to protect water, soil and forests. And claims for damages already reached 14 billion dollars. The novelty: what today is a nightmare, tomorrow will be the law.

If approved the Treaty Transatlatico warns Lori Wallach of ” Le Monde Diplomatique “, nothing will stop more appetite privatizzatore the” masters of the universe “, especially in the areas of greatest strategic interest: medical patents and fossil fuels. A dream, then, designing policies to fight pollution and to protect the earth’s climate. The TTIP “would worsen the burden of this legalized extortion,” that down today blackmails many countries, from Canada to Germany. The big business works to eliminate state laws to make way for that business. Currently, in the US there are 3,300 companies in Europe with 24,000 branches. Each of them, says Wallach, “can be considered to have good reason to ask, one day or the other, to repair a” commercial prejudice. ‘” Even worse for the Europeans: they are even 14,400 US companies located in the ‘ European Union , with a network of 50,800 branches. “A total of 75,000 companies who might jump into the public treasure hunt.”

The most disturbing aspect of the “construction” of the Treaty, a device intended – if approved – to disrupt the democratic life of the entire West – is its utmost secrecy: the press has been expressly invited to stay away. It is a decidedly subversive sort: big business is preparing to issue their diktats no longer secretly, through the lobby and complacent politicians of the Congress and of the European Commission, but now in the light of the sun, even turning into law the privilege of a minority against the vast majority of the population. The institutional autonomy of the State? Completely bypassed, disabled, in every industry, from environmental protection to health care, from pensions to finance , contracts of work to the management of the commons primary, Ttipsuch as drinking water. It is approaching the “great final privatization” of the Western world.

Food safety standards toxicity, health insurance, the price of medicines. And again: freedom of the web, privacy protection, culture and copyright, natural resources, vocational training, public facilities, immigration. “There is a sphere of interest which will not pass the gauntlet of free trade institutionalized,” writes Lori Wallach. Transatlantic relation to the Treaty, the conditions imposed by the WTO-halter today are considered “soft”. A special courts will decide on everything, formed by lawyers and business will be based on “laws” of the World Bank. End of democracy : “The action policy of the elect will only negotiate with companies or their local agents crumbs of sovereignty that they will want to give them. ” Not even Orwell’s imagination had come to that. Yet, it is exactly the nightmare that is waiting for us, if no one will stop him. And it is useless to have any illusions: for now, the “monster” no one is talking. Not a word, of course, the appearances of the policy , and even from newspapers and television. The biggest threat is approaching unabated, unknown to all.”

Remember Rubio made the deciding vote to push discussions on this through faster!  And remember Cruz voted yes too.  But, he is blaming McConnell for his vote.  I do not trust Cruz – this just smells bad.  If you stand against something, you don’t vote to speed it up no matter what!

Please watch this video to know what they are doing.