Okay, I get it. The consensus all must understand is this: it is okay to lie about Trump and Trump supporters but no truth or questions must ever be raised against the donor king Cruz? He can spout stories of little old ladies having their homes bulldozed down (even though the building still stands), go on road shows with Glenn Beck and call Trump Hitler and his supporters Nazi’s and we the people are supposed to remain silent and accept that as factual?
Once again a Cruz person has come forth to dispel the little guys who are trying to do the job mainstream media isn’t doing.

“There are quite a few rumors floating around in social media about Presidential Candidate Ted Cruz.
Americans are used to the mainstream media lying about Ted Cruz (see here, here & here for just some examples.) But it is particularly painful when the lies come from supposed truth-tellers. The largest culprits starting and perpetuating anti-Cruz falsehoods are sundance of the Conservative Treehouse and Dianne Marshall of the Marshall Report. They blatantly lie, or tell cherry-picked half truths, which are promptly disseminated in social media by an army of bullies who are seemingly not interested in civil debate.
Why create false stories if the candidate is so bad?” read more here: https://www.trevorloudon.com/2016/02/watch-debunking-anti-cruz-myths-video/

Cruz can get caught double talking on cable news and nothing is said, but instead let’s attack the little known bloggers who relay the message? Let’s stop these little people for they are not supposed to point out resumes, past actions, or express any opinions what-so-ever. Little people are only supposed to accept the obvious super PAC hate filled attack ads full of lies against Trump and not point out any false representation, nor true slander.

It was only a matter of time when the Cruz machine would come after the nonconforming voters. Those who just want to question all things. The establishment has fed us lies for a very long time and belittled those who question their opinions as fools, uneducated, and conspiracy nuts.

Can any of them explain to me what exactly sustainable development for the 21st century new world order is all about, if it is not what they say it is about on the United Nations website? Can any explain to me why the Council on Foreign Relations determined in 2014 that the president to be elected must have North American Union goals? Instead of smacking the little known guys, why don’t you do an article debunking the United Nations goals for sustainable development and debunk the Council on Foreign Relations stance on what is needed in the next president and their goals for MADE IN NORTH AMERICA.  Didn’t you see the links and  PDF report in my “little known” liar blog?
I’m listening.
Dianne Marshall 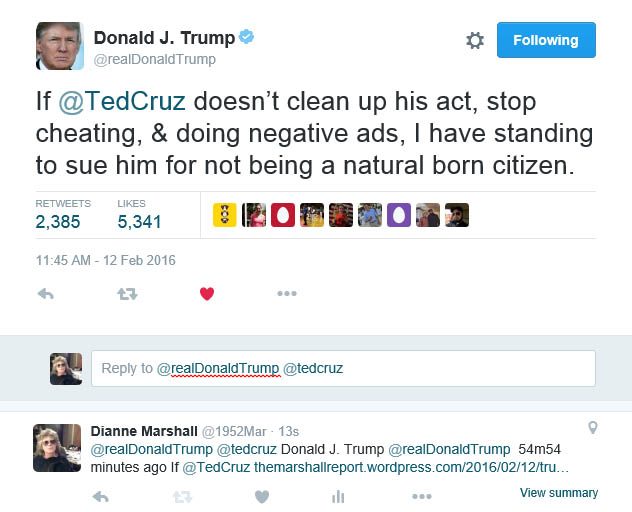