One Day I Will Tell Great Grand Kids About President Trump's Campaign! - The Marshall Report Skip to the content

America is in danger and her leaders have become as mad men drunk on wine- who is there to lead us? For it appears to any God fearing person that judgment has befallen this nation. 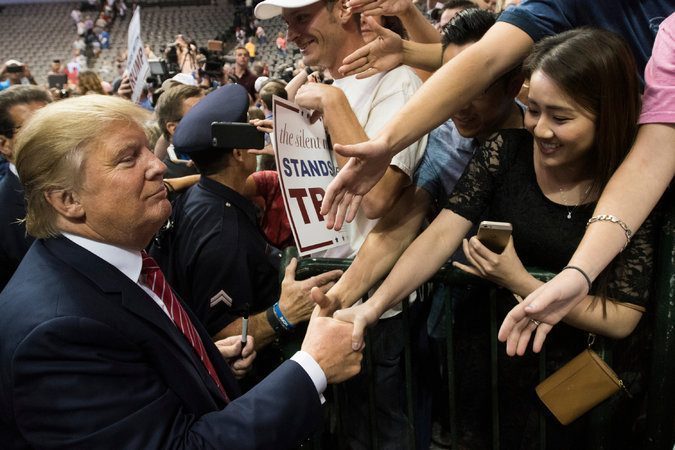 One day I will tell my great grandchildren what I saw and what it was like to do my part to help Donald J. Trump beat the establishment elite and win the presidency.

In the beginning of this campaign cycle, I remember no one was saying we needed a perfect person to run for office. Then all of a sudden a sinless life became a priority, all because a certain man said he was running for president  (guess who). I remember looking at the line up of all candidates from both parties running for president – guess what?  I found no candidate that had lived a sinless life. No perfected prophet figure sent by God to lead us to church…but, is that what a president does?

Don’t get me wrong, I want a president to be God fearing, but a leader’s heart must be set on performing the task ahead, and America has a big one. The task ahead is to stop lawless corruption in high places, restore the rights and protect the liberties of the people, and to guard this nation against those that would harm its people. A president’s task is a huge task to undertake and the people who vote should be looking for a leader who has the energy, experience, character, and ability to tackle all aspects of the highest office with wisdom and concience.

So when it all began I took a good look at the candidates on both sides that wanted to be president.  There were ravenous wolves, RINOS, sly foxes, yawners, a few idiots, puppets, inexperienced politicians, a proven disaster, some way too nice conservatives, a candidate whose only claim to fame was “ dems can’t use the gender card on me if Hilary runs” (guess who that is?), a self proclaimed indian (maybe?), a few good men but not well seasoned enough to please donor lobbyists and of course most all were using GOP establishment bully tactics.

There was also a man running whom the party heads and elitist donors were calling a clown. That’s what we had. So, since the indian may or may not run, and most of the others along with the GOP were demanding the Clown not run.  Most all were looking at him (the so called clown) closer.

This clown was and is a successful business man who happens to be a self made billionaire with sound experience in international markets, trading, development, banking, real estate, international contracting, an author, TV personality, real estate giant with a proven success record in negotiating deals with foreign nations such as China, Mexico, Dubai, and other European nations . He is internationally well connected and respected. He is a jobs creator personally creating over tens of thousands. He is a master mind at planning, well organized with a plan in place to repair and restore America to her founding fathers roots and the original American dream. He has a reputation for winning, standing by his word and dealing straightforward with others. But, he is a bit arrogant and doesn’t abide by political correctness, which is actually a modern day method used to censor freedom of speech, so I found that a positive quality.

Does anyone remember how dull this election was before the so called rich clown entered? The media hype was all about “surrender to Hilary the election’s over” propaganda.  It was her arid spring campaign with a few laughable moments watching Hilary ride through Iowa in her mystery wiener mobile with a crowd of reporters shouting, “There she is! There’s Hilary!” and watching the 30 to 40 press bots run to see her, leaving behind ONE LONE  HILARY SUPPORTER that had hoped to see her too.  Does anyone else remember laughing at that one?  Then she was done campaigning and somehow had the democratic ticket all sewn up.  Hilary really made campaigning look so easy.  All it took was one fan, a wiener mobile, a bunch of bat crazy reporters, and one smooth ride through Iowa.

Well that all changed the day the man they called the clown raised his tone and rolled up his sleeves starting on day one.  That clown has a name, it’s Donald J. Trump and believe me he is no clown.  He is the frontrunner the establishment elite all fear.  He is a man’s man and a strong advocate to any and all who wear a uniform. Whether it is a uniform of service to the military, fire fighters, police officer, border patrol, a nurse, the grade school custodian or one worn by the waitress at the corner diner.  Trump respects them all for the services they provide.

Trump knows how America used to be and he knows the American dream is broken, but he also knows how to make it bigger and better than it was before.   He has vowed to make America great again and has laid his word, his fortune and his reputation on the line to do so.

I see only one, that one is Donald J. Trump!