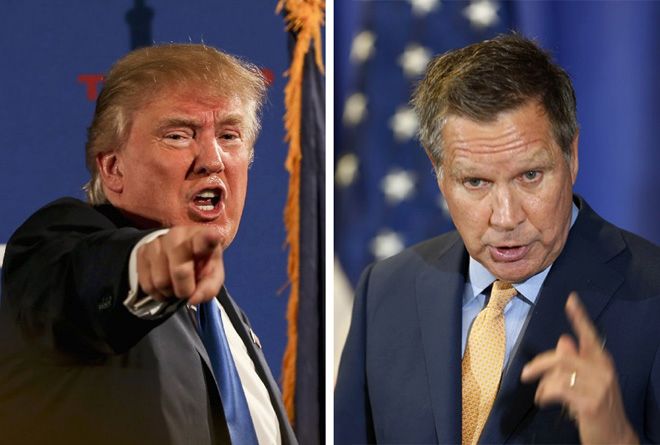 I was wondering why Ohio Governor Kasich was still allowed on the debate stage.  Oh that’s right we are down to the 2 percent club now.  If his loud mouth ramblings weren’t enough to have to listen to at the debate, now we have to  listen to his whining about demanding Saturday Night Live give him equal air time.  Good grief – does he even know how bad that looked?
Obviously he doesn’t care, as most 2 percent candidates know they lost, they all do…but their handlers have them in the race for a bigger purpose and that purpose is to use them to throw super PAC money at their failing campaign in order to bring down the front runner Donald J. Trump.
So while Governor Kasich sides with Obama and invites refugees to invade the oil fields in Ohio, and welcomes them to his state, his own constituents do not share his insane ideals of sharia law.  But, Kasich isn’t looking at pleasing them, nor  is he looking at keeping them safe. Instead his motivation is to bring down the only real leader that can restore America and take the action steps to protect its’ borders against the onslaught of danger on our soil.
Kasich has shown his true RINO shades of blue and his true un-conservative self.  Now he is showing his lack of concern for America’s safety.  Does he care?  Heck no.  All he wants is a few high fives from Obama and the establishment elite  who desire to cripple America.
Well, Kasich has cooked his goose and hopefully he will choke on taking on too big of a bite.  He has shoved the entire bird in his mouth and now we will watch him garble as he flails around and falls flat on his 2 percent following.  I bet he lost more than votes in Ohio with his refugee rant!  I bet he lost the respect of the majority of the people.
So Trump supporters, brace yourselves and get ready to counter smear.  That won’t be hard.  I have to admit, I am right there with Trump, Kasich is so insignificant that I hate even wasting the time showing the people what he really is.  They already know he is a RINO and a fail.  But, his super PAC enablers are just taking good money and lining their pockets while throwing a bit of the cash at the democratic party.  Yes, I said democratic party for they are the only ones that will be watching and listening to his ilk.
So if they plan to create ads that gear toward voter remorse after Trump is elected, have at it.  I see a lot of voter remorse growing now for Kasich as governor.  The only voter remorse people will see after Trump is elected is the remorse from those eating bird like Kasich after he is elected and does everything he said he would do.  The remorse of Bernie and Hillary as their manifesto comes to an end.  The remorse to ISIS as he bombs the heck out of them and sends all the refugees back where they came from.
Go Kasich – support Hillary and Bernie by endorsing all they are for.  You are such a total loser.  A total shameful fail.  Worse, you are a poor loser and I doubt if you will be re-elected as governor next time around.  You just let down your state supporting ISIS in your cities. After all, anybody can manage a budget with an oil field cash flow.  Even the village idiot.
Dianne Marshall