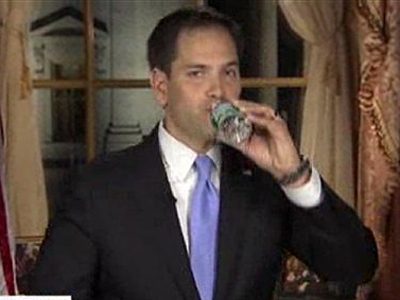 A person’s family member’s bad past should not be held against a person, but it seems to have been a factor in the Romney VP selection process.  That among immigration status and the release of Rubio’s book where he exposed the skeletons in his closet just may have cinched his chances in 2011?  So, why aren’t they popping up now in the presidential race?

I kept wondering why Rubio’s extreme sweating was such an issue with Trump.  Then it occurred to me, finally….perhaps it had something to do with a substance?  Perhaps some sort of substance to energize and keep one going on key?  Or perhaps it was just merely an anxiety thing?  Or perhaps it was a bit of both?

The one thing I do know for sure is that there are drugs that are highly addictive and once you start it does take lots of money to continue.  The habit also never seems to go away without some sort of assistance along the way.  A side effect is excessive sweating.

Well, Rubio has not done well in his own household with finances in the past.  He has been bailed out several times by others.  I wonder why?

In 2008, despite earning a declared $400,000 – including his $300,000 salary from the Miami law firm Broad and Cassel – Rubio failed to pay down the principal on his home for several months, according to Florida campaign finance disclosures.

“During the same period he did not pay down the balance of a $100,000-plus student loan from his days at the University of Miami, the disclosures said.

Before joining the Senate last year, his name surfaced in an Internal Revenue Service investigation of the Florida Republican Party’s use of party-issued credit cards. He frequently had used his party credit card for personal use, and later reimbursed the card company for about $16,000.”  Read more: https://www.huffpost.com/entry/marco-rubio-vp-gop-candidates-florida-primary_n_1233480

I am just saying where did all his money go?  That is an awful lot of cash to waste.  There just seems to be a lot of unanswered questions and a lot of things to look at in the closet.

For those who think this is a hit piece…believe me you need to ask the same hard questions.