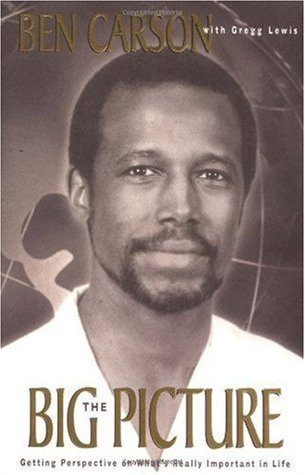 As a person, he’s likeable. He has a quiet charm. As a business associate I would watch my back. As a President, definitely not. He doesn’t commit, he double talks and when caught it is you who don’t understand and have the problem. Scary.

In 1999 Carson wrote in his book The Big Picture- “White people have no grasp on history of racial violence in the United States.  Black Americans, on the other hand, find it almost impossible to think about ‘fairness’ or ‘justice’ in anything but racial terms — because of our nation’s historical record of unfairness and injustice to our race.”

Carson has said repeatedly that he has the same goal as Al Sharpton. He believes his approach is a better one to take. What is being revealed here is a soft spoken approach to say the exact same racial rhetoric, and softly hit you upside the head with his beliefs and philosophy.”You whites just don’t understand what the black person has lived through and the sins of the past that have shaped the anger and hatred between races.” Yet, Carson makes no mention of black on black crime.

Recently three black gang members killed a 9 year old boy. White people donated money for the black mother to bury her child. The mother went out and bought a new car. So you tell me…who is trying to help who? And why is it that the character of many blacks caught up in gang related crime is not questioned?  Why is it just considered a victim of white society?  Why is it that no matter what is said, those who resemble Ferguson rioters are the ones who are misunderstood and the ones whose actions should be above the law and given space to destroy?

These issues do need to be addressed. They need addressed before we all go to the voting booth. We have to know where Carson is leading as much as where any are leading us. This is called vetting. He fought the media to prove what he said in the past was true and how he felt. Will he fight for these beliefs and truths of behavior too? Or will he now deny this part of his past and blame the media for dredging up unpopular rhetoric that he has now outgrown?

Well, the same goes for those committing violent and nonviolent crime. These are classified as felonies and misdemeanors. Lowering the bar here does not change the wrongful action or lower the crime rate, as we have seen in sanctuary cities that have reclassified many felonies to he level of misdemeanors.

Are we not to receive impressions based on actions? Carson went on to say in his interview, “And I think it’s probably not the most reasonable position to take — that because you have a police officer that does something bad that all the police are bad,” he continued. “Having said that, do we always need to always be vigilant and pay attention to the justice system? Absolutely. Do we need to look at, you know, mandatory incarceration of people involved in nonviolent crimes? Of course we do. We don’t want to send them to a university to make them into more hardened criminals. So yeah, all of these things are things that could be improved upon.”

Does Carson believe that those who have no consequences for their crimes as the law states on the books would really excel in a university setting? Especially those who can’t respectfully attend high school without creating conflict with those who want to learn?

I am beginning to see Carson’s “BIG PICTURE”.  He was helped by the unfair prejudicial system to become a doctor (sarcasm intended) but remembers mostly his personal views on racism and the poverty of his neighborhood.  After becoming successful he decided to give something  back to help the lives of confused blacks  by showing them a better way. (nothing wrong with that)  Paint yourself as out of control youth with black anger issues, then show how a few hours in the bathroom with a Bible and applying self -will to tame the anger can turn your life around. Show a better example of how one can take the high road and stay focused and become a famous doctor who can author books that show others the way to the promised land. It is called style.  It all sounds very good.

His opposing candidate for the job of exposing racism is Al Sharpton. Vote for Carson whose plan is a soft helping hand approach versus Sharpton whose plan is a hard core action plan with “in your face” confrontation. Both are using the same weapon called racism. Yes they do indeed have the same goal, just different methods and styles to present their cause.

Well, what about the kid who successfully stabs a relative or a friend? What about the kid who actually hits his mother in the head with a hammer? What about the kid who gashes another kid at school with a lock and leaves a big gash in their head and says it’s okay because Carson did it and he turned out okay. After all, I ‘m only 14. Where is the order in our schools? What happened to consequences for harming another, and/or making other kids’ opportunity to learn intolerable? What about bully issues and right and wrong?

If you are ready for more of the same racial divide only this time from a soft spoken person, whose end goals are the same….who tells you softly that whites don’t understand black issues…then vote for Carson. If you are looking for someone who can lead America out from under its’  failed immigration, economic, and foreign policy issues,  someone who will stop mandated vaccines, and keep Medicare then vote for someone else.

When you watch this video you will see an example of his ideology and scary walk back, and talk back.  https://www.youtube.com/watch?v=aQ5uXAtQ8YI

I want to see a leader who addresses poverty for all Americans.  Not specific groups of Americans.