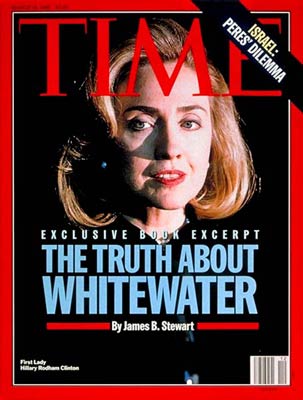 It appears the sleuths are bringing up the White Water Scandal, another Clinton unsolved case.  Or shall I say open ended case.  To many it sounds like they are bringing up a dead horse to beat…but to those who have dug up that dead horse they are looking for justice and indictments in a very long drawn out act of evil that is yet continuing onward.  It is part of one of the biggest trails of theft and money laundering scandals in history.  The Clintons are not alone in the scandal.  If they go down, many key figures will also topple. Therefore, and for this reason alone, who knows what will ever be done?

Shortly after Bill Clinton took over the presidency in 1993, questions were raised by The New York Times about the Whitewater Development and Madison Guaranty loan scandals. The Clintons had invested in the project (at a “loss”) and it was learned that the bank had used its influence to hand out $3 million in loans with deposits of only $300,000. This procedure is practiced by virtually every bank that loans money under the “authority” of the Federal Reserve System. Banks are permitted to loan up to 10 times their actual cash deposits, a legal practice approved by the Federal Reserve. This is the “regulation” that makes it possible to “create money out of thin air.” No actual exchange of money occurs between the Federal Reserve and the lending bank, yet, the loan transaction is recorded on paper as if there had been such an exchange.  Today, the “required” cash on hand is reported to be closer to two percent.

That being said, what did the Clintons do wrong?  Their shell corporation only did what the Fed. Reserve Banks were doing, selling to those who eventually couldn’t pay, then repossessing the properties, making money in the same fashion.

Well, the former White House Deputy Counsel, Vince Foster submitted several delinquent tax returns for the Whitewater Development project in June, 1993. In July, 1993, Foster “committed suicide” in Fort Marcy Park in Virginia—so the “official” story goes. After a conflict of interest was determined in the appointment of Robert B. Fiske by Attorney General Janet Reno, Kenneth Starr was appointed by a panel of three judges to head the Whitewater investigation in 1994. There was even an investigation into the murder of Vince Foster, who had worked with the Rose Law Firm alongside Hillary Clinton. Although questionable,  Foster’s (timely, untimely?) death was ruled a suicide and only James and Susan McDougal received jail time. James McDougal died of a “heart attack” while serving his prison sentence. Case closed right?  Wrong.

Contrary to the findings of the Starr investigation, one of Kenneth Starr’s lead investigators, Miguel Rodriguez, claimed there was a cover-up of the forensic evidence discovered in the Foster murder. According to Rodriguez, evidence at the crime scene did not match the evidence contained in the “official report.” Rodriguez is recorded on tape describing details of the coverup and his frustration with a corrupt legal system.At the conclusion of the Whitewater investigation, Rodriguez was “demoted” to a state job in California.

So what was inside those delinquent tax filings that cost Vince Foster his life? What could have driven him to commit suicide? If what Miguel Rodriguez said about the Starr investigation was correct, that it was being used to coverup the murder of Vince Foster, perhaps another look at the Whitewater case will open up a lot of things that investigative journalists have found, written about, and sadly then sat on waiting for the right time to present their case. 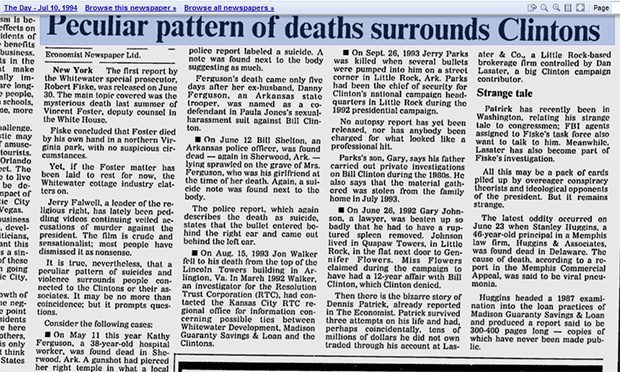 Will Hillary finally have to own her past evil acts or will she just blame it on the republicans?