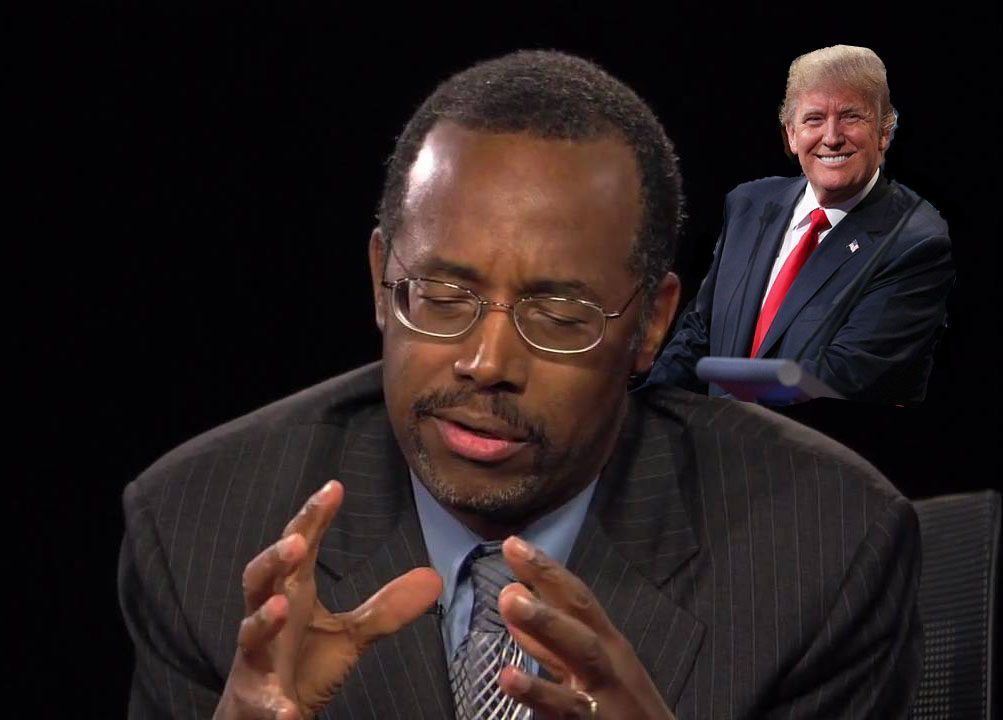 A Carson Presidency will be therapy for him, but terrible for America.  He is obviously still struggling with his childhood upbringing.  For some reason, he must feel that if he admits his past sins enough times the world will applaud him for them. Oddly, it seems to be working.

Everyone seems to be thrilled that he overcame his abusive personality and strangely no one questions if he ever sought professional help, nor asks if he is on medication for his manic episodes.  Was he ever diagnosed?  Or are we left to simply believe his insane behavior and aggressive anger issues were merely part of racism in America.  I don’t buy it.  It is not anyone’s fault that he was a confused kid left to fend for himself because his father was a bigamist. I think that is what he said?  His mom worked he said from 3 am to midnight.  So it appears he is a self made man.  I don’t know?  I get confused on what his point is for constantly bring up his bad things, unless he anticipates some of his victims coming forth to discredit his campaign?  Who knows?

Isn’t it time to address the real issue of prejudice?  It relates to behavior and  behavior doesn’t have a color.  It has consequences.  It is acted out based on individual emotions and  learned responses to actions.

For example suppose that…

You are a young teen hanging out.  A kid doesn’t like that you changed the radio station.  He gets out a knife and thrusts it in your gut. It is stopped only by the grace of God and your large belt buckle.  It breaks off and you are able to run away.

Will you be afraid to run into this kid again?  If you are, does that make you prejudice?

Do you think others will be afraid of this kid when you show them the deep cut mark in your belt buckle as you tell your story?

Will you remember this day for the rest of your life?

When you find out he is running for president will you vote for him? What if you had been crippled for life?  Forgiveness is one thing, having him lead the nation is another.

It appears that bad human behavior is the real issue here and not the color of skin?  It is clearly black on black crime, and attempted murder.  Yet, it’s the hood and they get away with it, so we are supposed to look the other way too? Does he really expect us to applaud him and say –  gee he became a doctor so why not let him be president too?  Not.

In the 21st century do we really need another candidate like Carson that is basing a presidential run on a promise to end racial issues for their brothers or do we want a candidate that will address the real underlying issues of poverty and anger by providing jobs, and opportunities for all?  Do we really need to encourage the tearing down of all historical landmarks or do we need to focus on education and ridding our nation of those who would hand it over to a global governance?  Isn’t it time to bring the home back into the family unit and forget the Saul Alinsky village that breeds gangs and drug addicts?  Isn’t it time to look at the candidate that can rebuild America and lift people up, instead of tearing them down?

Take a look at Donald John Trump and see what his policies are and what he intends to do for all Americans.  The Obama administration has fueled racial divide.  Haven’t we all had enough of that?  Isn’t it time to rebuild America together?

I will not vote for anyone who wants to keep “tinkering” with old racism wounds that will not heal as long as they are picked at and festered up Sharpton style.  Doctor Carson should know better than to keep picking at wounds and not allowing them to heal.

America needs a leader, not someone who desires to tinker around the edges, as Carson says he wants to do.   Let Carson tinker on his own time.  I suggest he can do much good starting a ministry of sorts. He can teach gun control and forced vaccines all he wants, just leave “We The People” and our constitutional rights out of it. (Does he even know what any of it means….will someone please tell him it isn’t a book up for edit!)

AMERICA needs a commander in chief with vision.  Not a man who keeps bringing up Rosa Parks at the back of the bus and stories of almost killing another kid but, for the grace of God the knife broke on the belt buckle.  Did it ever occur to Ben that perhaps God was protecting the other kid, and perhaps sent an angel to have his brother hold that hammer back before he cracked his mother’s skull open with it?  Did he ever think that divine intervention was sent to others to protect them from him?    Boy I sure have.  Has anyone else?

I do not trust the mental and emotional stability of anyone who has done such horrid things and never sought professional help.  I mean, sitting in the bathroom to self calm by holding a Bible doesn’t do much for me when it comes to being an answer for mental instability. It certainly doesn’t rid a teen of the underlying problems.

Let Doc Carson be Doc Carson, just don’t let him be it inside the Oval Office. Especially when America is all but sold to the establishment’s global governance agenda.

Stand up and rally for America by supporting  Trump! He is the only one with the energy and the grit to fight the enemy within!