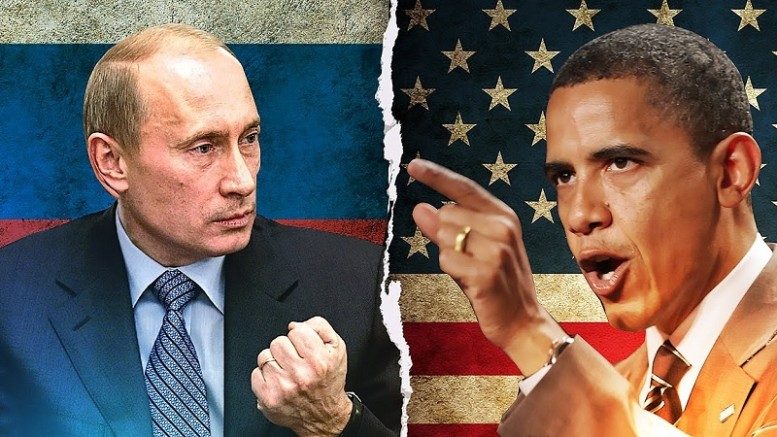 Russia is sticking to independent foreign policy and is not on board to topple nations at the whims of Obama.

President Vladimir Putin continues to stress that all nations are different and should be respected. Putin stance is that nobody is obliged to follow any development model that someone declared to be the only valid option. Therefore, it is necessary to stop using the UN for narrow egoistic unilateral purposes. Positive results are achieved when UN member states, primarily the members of the UN Security Council, pool their efforts and find universally accepted politico-diplomatic decisions.

It is obvious that it is the western world that is murdering civilians in the name of democracy. The same ones blame Assad for trying to end unrest, all the while the US continues to train ISIS rebels and send them to Syria? They fund the terrorists and aid the enemy of a sovereign nation? Is this not an act of war? Have they twisted the entire rules of the United Nations that are to protect the sovereignty of all nations into a free pass for the western leaders to do as they desire? Sadly, they have and they get away with it.

At the recent UN meeting Obama made it clear that he is intent on continuing to strong arm smaller nations until he can have his will carried out. These are not the words of a rational argument to support smaller nations. Especially when select pieces of history are mentioned out of context and not the entire pages of truth that led to the crisis in Syria. It is obvious Obama in his speech to the UN was trying to justify his blunders and point a finger at those he wishes to overthrow and was not successful in doing so.

As Putin stated, “Western attempts, led by the US, to stall the objective process of the evolution of a new, more just, polycentric and stable world order, and to continue imposing on other countries recipes for transformation, are leading to greater chaos and anarchy and are encountering growing rejection and sometimes outright renunciation on the part of many states.”

Putin made it clear that Russia will continue to follow an independent, multi-vector foreign policy, responding to its national interests, strengthening its security and consolidating its positions in the modern highly competitive world. He said, “Our country maintains its traditional position as a key international player and is playing a major role in ensuring a balanced development of international relations. At the same time, we do not impose anything on anybody, do not try to reduce everyone to the same level and do not force anyone to sacrifice their peace and prosperity for the sake of certain values.”

Obama, on the other hand smiled as he spoke his teleprompter lines of how sanctions against Russia were hurting their economy and lowering their ruble. Right after, he announced he was open to discussions with Russia and Iran. Now, I ask you … are these the words of a leader who truly wants to negotiate? The fact is, Obama directed Kerry out of the UN Assembly Hall when it was time for Putin to speak. I guess, therein lies our answer.