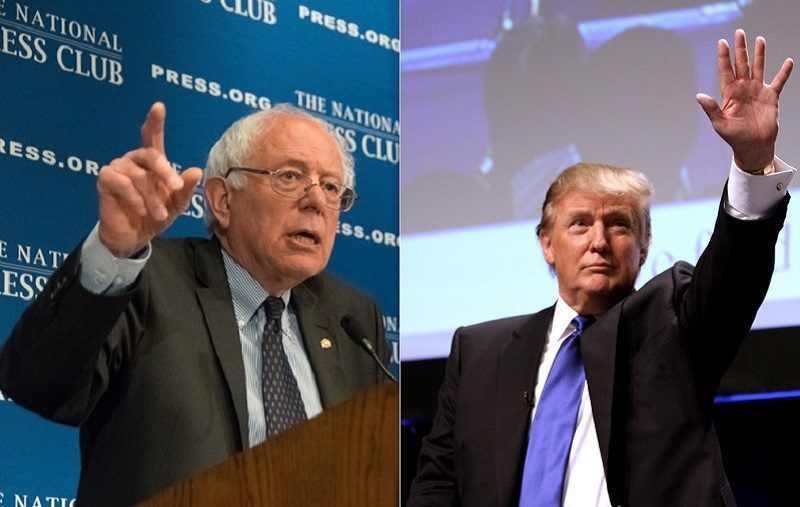 Bernie says we want real change…Trump shouts – MAKE AMERICA GREAT AGAIN!
I’m with Trump.  Restore and rid the establishment stranglehold.  Where Bernie is anti-establishment, he simply does not have the ability to bring the right team together to do it for he still supports common core, and socialized all things.  He wants jobs, but he has no strategy to create them.  He wants to end the big banking schemes, but he has no way of doing so.  Trump can both create jobs and stop the banking schemes.  He knows how both work and what to do to fix it.
Bernie has a lot of spirit and sincerity for his focus on what he believes.  More so than any GOP establishment candidate  (Note: Trump is in a class all of its’ own it’s called America! He is not establishment candidate).  Yet, Bernie does not have all the right pieces in perspective.  I admire the fact that he is honest in all he says for it is what he believes, but his tax ideas are in outer space.  I know he wants to end the national debt, I applaud that, but only Trump has the plans and not just the desire to actually bring that debt clock to a halt.
Bernie wants to raise wages but he will have less jobs for small businesses will not be able to afford his ideas….he has a plan.  The plan is like a kid standing up and telling the neighbor kids all the things he is going to do for them like ice cream, no homework, and bicycles for everyone!  And your mom is going to pay for it all!
Now that will only work if you know how to strong arm mom….and Bernie with the other pair of underwear on the radiator….simply won’t be able to do anything but agree with mom that climate change is real and do her bidding while he does his homework with the other kids and gets no ice cream and only dreams of having a bicycle.
But, you have to admire him.  He isn’t cheating, he isn’t lying, and he also has experienced voter fraud and has kept on a going!
Voting for Trump!  He is the man that can put the muscle behind what he says he is going to do and get it done!
Dianne Marshall