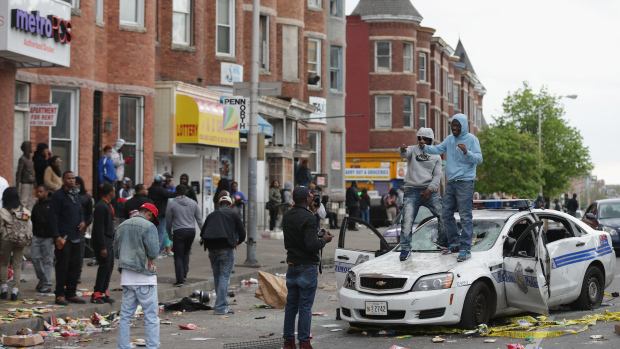 A fictional story based on present day reality. The fact is Sanctuary City’s have become hell holes.

If there was ever going to be a war, it was going to be now. The black rage was riveting through the veins of angry youth on the streets while mothers of the enraged were closing their eyes and ears to the actions of their young. Their young were the only thing they had of value, for many had already lost themselves.   Sadly, this was the case for many of white color too. Some blamed the government, others blamed the white rich folks.

Either way it was a war between the will of the people and who could be blamed . No one wanted to answer for any persons lack of ambition, responsibility or wasted life. It was a war that could not be fought and one that could never be won for it was a war within a person’s soul. And so our story begins in a Baltimore housing project.

Juanita, a 45 year old single black mother looking worn and tired took a drag from a half joint. She looked disheveled as she lay back on a fabric torn sofa with her head cocked back. Holding in the breath of smoke with her eyes closed, she slowly let it out. The room was dark and all the shades drawn, although it was midday.

It seemed that the leaves inside that roll of paper was the only thing that kept her from raging out at her son. It helped her see a world she could only imagine.   One where she owned a nice house with shutters and a white picket fence , a yard to call her own. As she took another drag she envisioned a big window in the kitchen with the morning sun beaming its’ warmth through on her as she prepared the morning breakfast. Holding in the waft of smoke she smiled slightly. Slowly she let out her breath as the smoke rolled down, then upward.

“Bang! Bang!” someone pounded at the door causing Juanita to flinch.

“Bang! Bang! Bang!” Juanita slowly let the waft of smoke out and lifted herself from the sofa.

Juanita slowly walked to the door , “I’m coming….I’m coming.” She unlatched the chain and turned the lock and opened it as her son, Sammy, pushed through. Blood was dripping from his side as he quickly slammed the door, locking it and putting the chain in the latch. A roach scattered up the door facing.

Juanita looked and wavered back and forth from being high. In a garbled voice she spoke, “Is that blood?”

Sammy ran to the bathroom and grabbed a towel and stuffed it over his side. Juanita stood there swaying back and forth like she was going to pass out. She caught herself and stumbled to the sofa, falling into it.

“Sammy”, she hollered, “Sammy …” her eyes half closed.

Sammy ignored her and tended to his wound.

Juanita situated herself on the sofa then leaned over to the end table and picked up a glass of half filled vodka , the ice was almost melted. She took a gulp then fell back and closed her eyes.

“Sammy you been hurt?”

Sammy continued to ignore his momma.

Juanita mumbled, “Sammy you knows I….” then passed out.

Sammy came out of the bathroom with his wound rigged up in a bandage of sorts and looked at his mom sprawled on the sofa. He didn’t look the least bit phased. It was as though he was used to this.

Sammy hurried to his room. He lifted up his mattress and pulled out a revolver. He checked the chamber and it was loaded. With a painful expression and slight moan he felt his makeshift bandage over his wound then left.

Juanita opened her eyes half way. “Where’s my cigarettes?”

Juanita motioned for Sammy to leave as she slowly stood up. Sammy locked the door . “Just lock the chain Momma.” He said as he left and shut it behind him.

Staggering as she walked, Juanita chain locked the door. She made it back to the sofa and fell back onto it, passed out.

Juanita was in the bathroom and had just finished brushing her teeth. She splashed water on her weary cheeks then patted her face dry. She stopped and looked hard into the mirror.

She thought, “I have to stop using that stuff.”   Touching the puffy skin under her eyes Juanita muttered under her breath. “Never again. I’m done with that.”

She left the bathroom and entered the Kitchen.   “Sammy,” she called out, as she opened the coffee can, only to find it empty. She shook her head. “Sammy!” Sammy does not answer.

Juanita walked to Sammy’s room and knocked on the door. No one answered. She opened the door and looked around. Sammy wasn’t there. On his unmade bed laid a bloody towel. Suddenly Juanita remembered Sammy was bleeding. Juanita gasped and put her hands to her head.

“Sammy. Is he okay?” Quickly Juanita grabbed the phone and dialed a number. After two rings someone answers.

“Have you seen Sammy? He’s not here. I don’t think he came home last night.”

“You sound worried. What’s going on?”

Juanita hung up on her sister, Chenille. She has a worried look on her face. She slowly sat down at the table and tried to recall what happened when Sammy came home yesterday.

“Bang Bang Bang.” There is a knock at the door. Juanita yelled out, “Sammy?” She hurried to the door and opened it. “Sammy…”

Instead of Sammy, there stood two police officers.

“What do you want?” she asked.

“Are you the mother of Sammuel Brown?”

“Sorry Maam, but we believe he was shot last night in a gang fight. We need you to come with us to identify the body.”

Juanita waved her hand in the air and firmly denounced the officers words. “No. No. It can’t be.” She uncontrollable, “ My boy’ll be along here shortly!”

The officer reached into his front pocket and pulled out a photo from the crime scene. He handed it to Juanita. She looked at it then clutched the photo to her heart as she fell down to her knees. Juanita shook and sobbed uncontrollably. Muttering his name over and over under her breath.