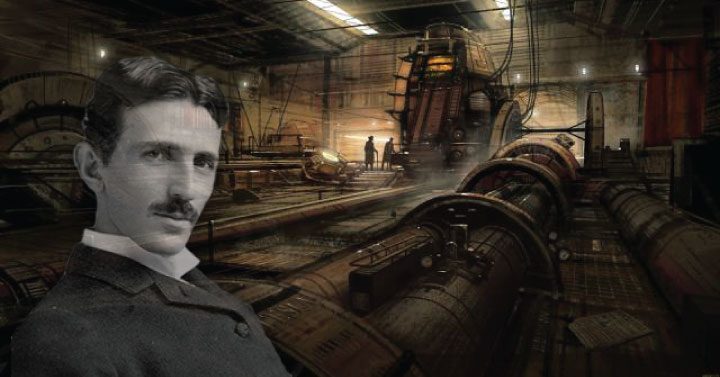 President Donald J. Trump’s uncle, John Trump was a genius who after the death of Nikola Tesla, was called in by the FBI to interpret the writings of Tesla’s work. You see, after Tesla’s mysterious death, there was a scramble by the United States government to find all of his papers, notes and research before other foreign powers could find them. The government seized everything they could find. Some of his drawings and work were said to be missing. (How would they know some were missing? What were they specifically looking for?)   There was a great search to find where they might be.

Could it be as simple as the story told by Tesla’s nephew Sava Kosanovic, who said that before anyone arrived, someone had went through Tesla’s belongings and took an unknown amount of his personal notes and papers?  If so, who and why? 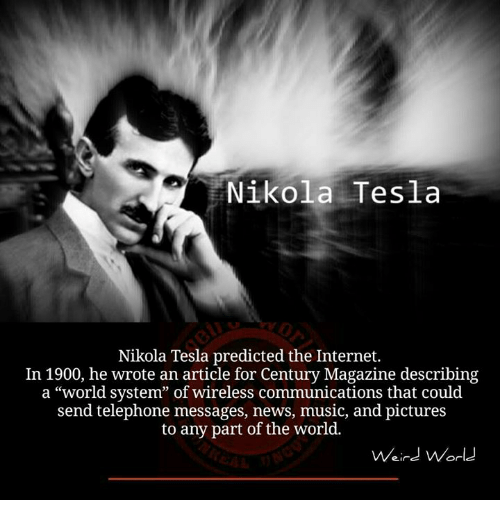 At the time, it was known by the FBI that Germany had obtained a lot of Tesla’s research  via his assistant George Sherf Sr. and his son (nick named curious George by Tesla) George Sherf Jr. (i.e. NAZI SPIES), several years earlier before he died.   Sherf Sr. in his stealth as his assistant, had profiteered off of Tesla by stealing and selling his patents to German intelligence and some to the US government. In the end, Sherf Sr. had short changed and screwed over Tesla to the point he ended up penniless.

Back to after Tesla’s death of 1943…this stolen material, the FBI believed, was the blueprints to development a flying saucer. The same flying saucer that later Hitler was known to somehow discover, develop and or acquire. (You can decide which one it was for yourself, for their are many conspiracy stories designed to keep the truth hidden from all mankind.) 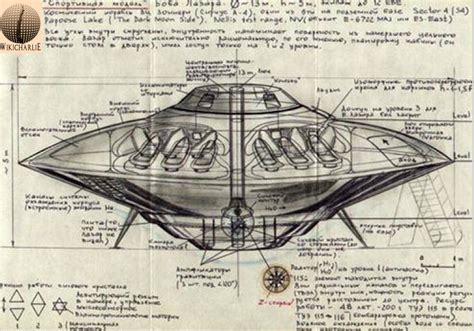 The conspiracy story most believe and that is pressed the hardest in social media documentaries is that Hitler got the technology from the Greys after discovering a saucer close to a hollow earth opening. The greys are from other planets and are hiding underground.  The same greys that are at area 51 and hosts the same saucer craft. Russia, or so the conspiracy story goes, also found the greys and the technology for a saucer or two.  The story most perpetuated is that the wonderous technology of flying saucer craft came from Alien Greys and also a strange Aryan Race of tall whites. 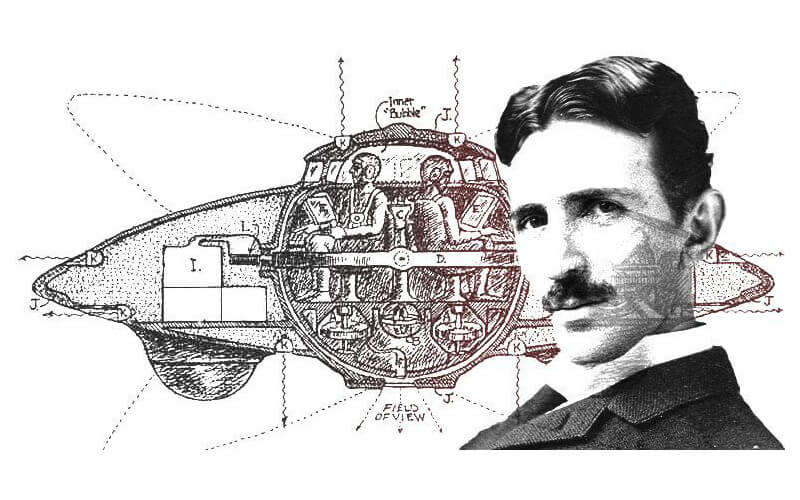 Anyway, after his death (and prior to) anything even remotely associated with the great inventor Nikola Tesla was quickly confiscated and lost within the networks of government and military secrecy.  They all but erased anything to do with Tesla and his inventive genius.  Giving credit to his patented inventions to the likes of Edison, Marconi and others. 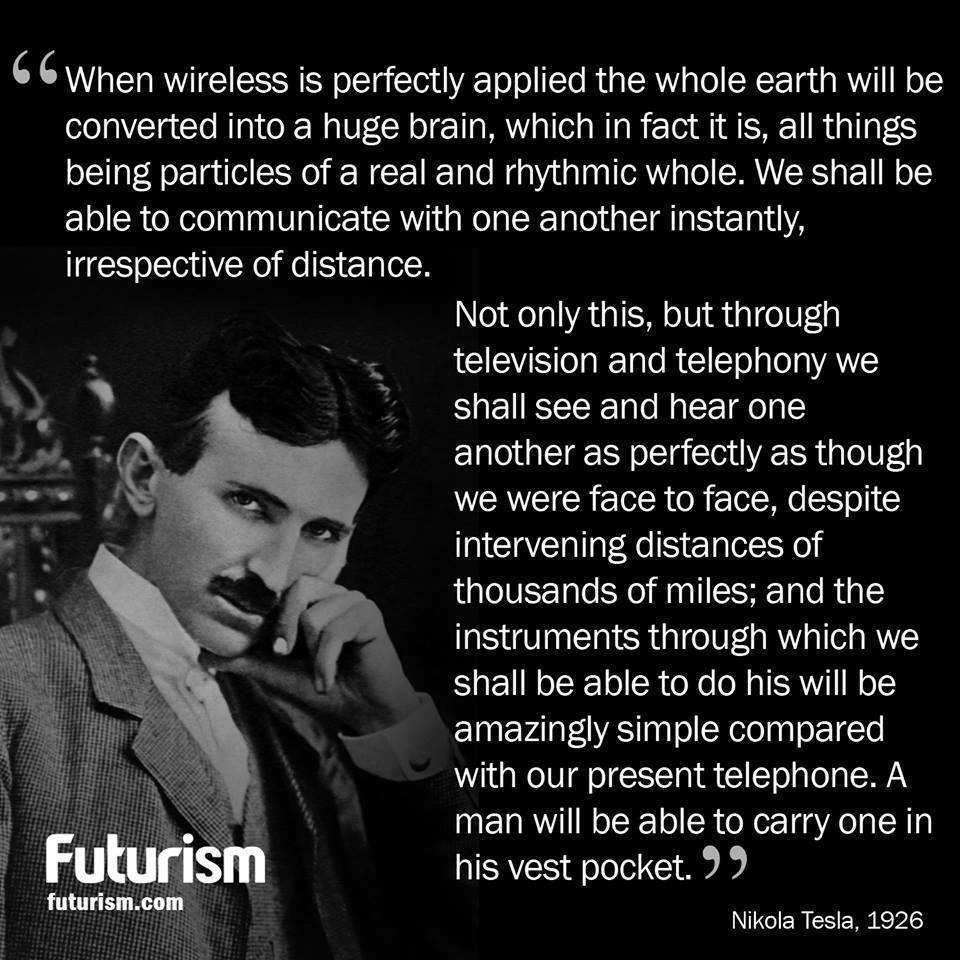 Today with the internet and secrets being exposed, Tesla is receiving the credit for technology that is long overdue. But, this credit leaves those who love secrecy with a dilemma. That being – “How do they now explain their plan to invade the earth with Aliens?”  Well, now they are proclaiming that a box of missing memoirs were auctioned in 1976 and opened 20 years later and the secret is – are you ready….. the secret is he communicated with aliens to learn how to make all his inventions, especially his flying saucer craft and death rays. 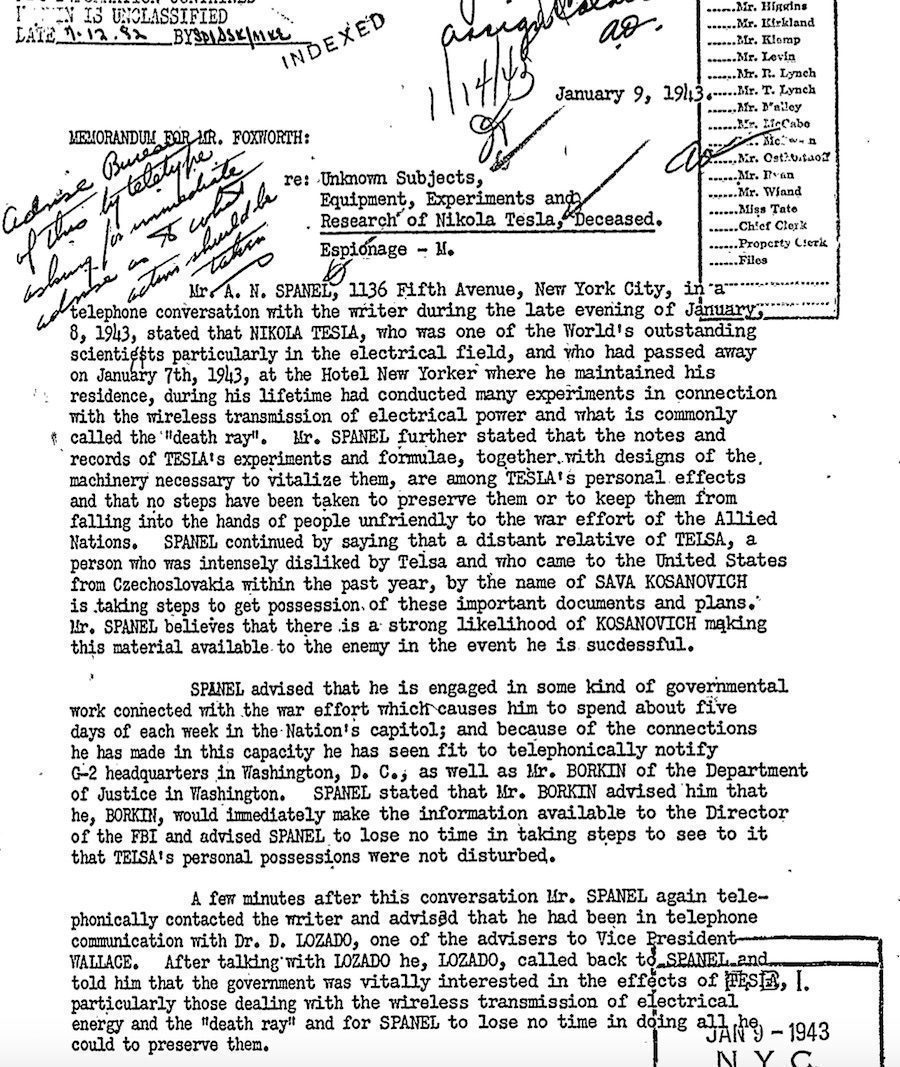 To me, it is obvious that when liars and deceivers have been caught, they do what is natural and that is “MAKE A BIGGER LIE”.  The technology that Tesla was given, and according to his own words was to help mankind with free electricity, free stuff.  His life was selflessly devoted to creating things to show mankind how all humanity can live prosperously.  He was not out to get rich nor to make others rich.  He was out to help all mankind. It is thought that his mysterious death was not a heart attack.  Today, this generation knows how people who know to much or are in the way seem to be taken out of the way by unnatural means. That being said, let’s look at some of  Tesla’s writings and drawings that the government has held in secrecy. 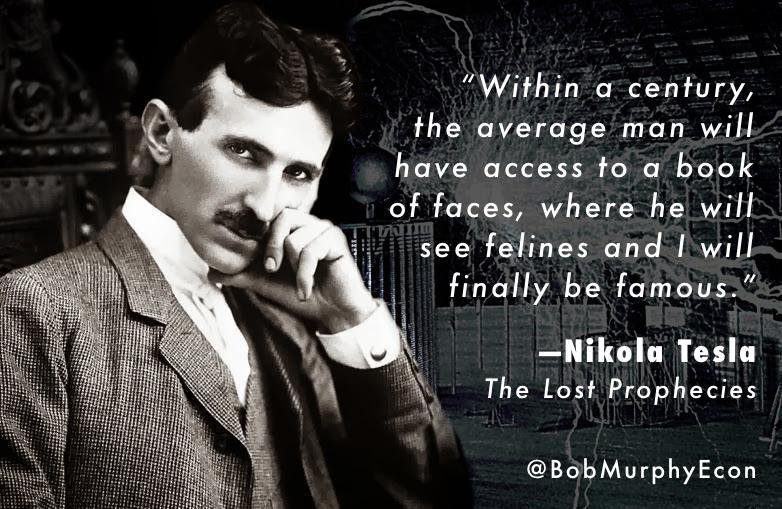 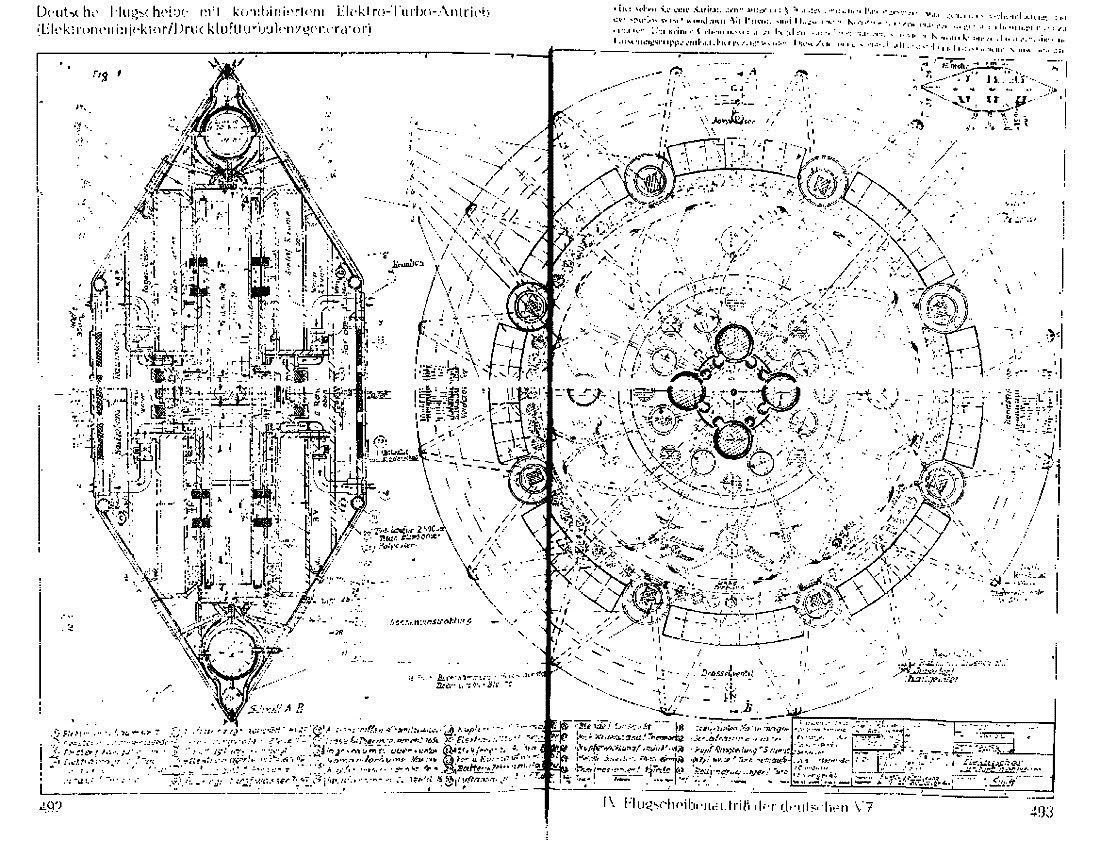 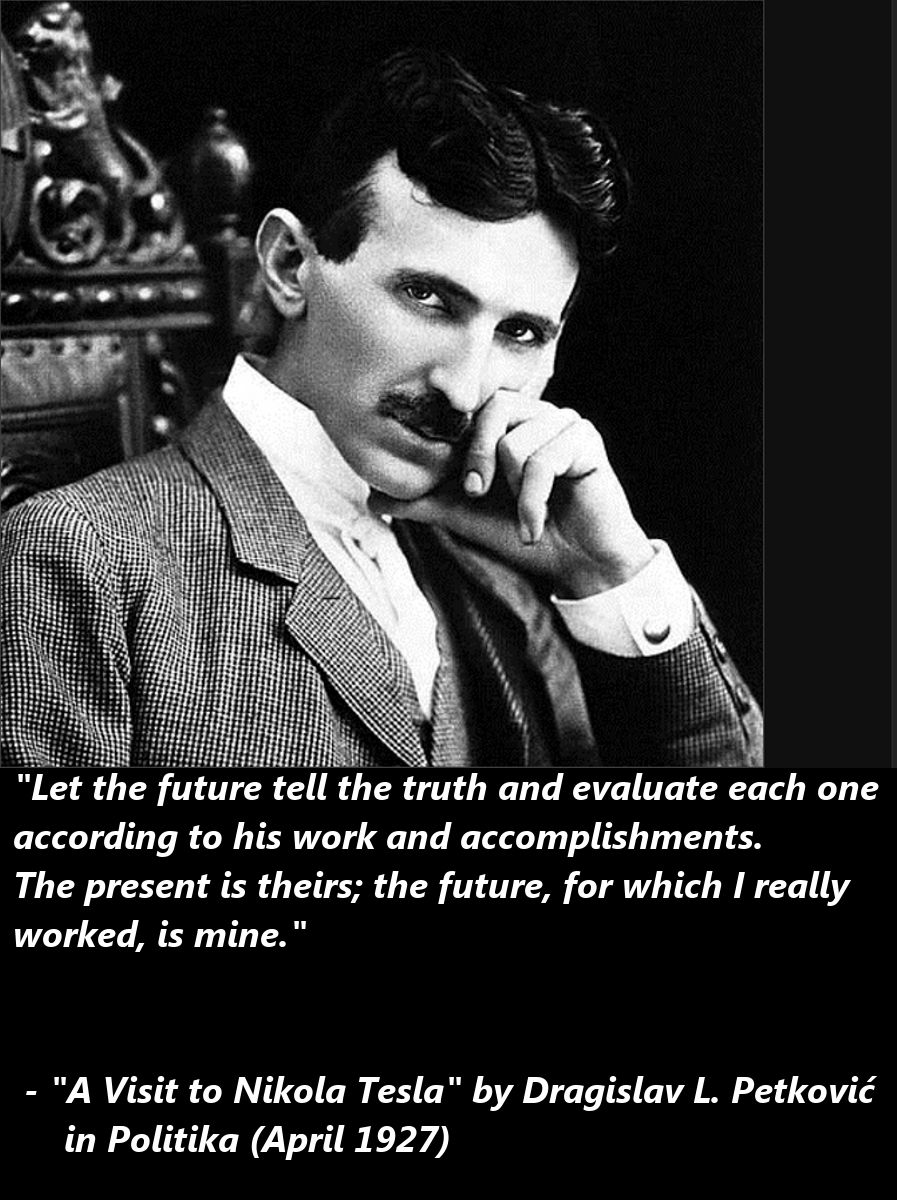 In trying to replicate the time machine he saw in his head (or came here with the knowledge of?) Tesla experienced, the very real dangers inherent with time travel. On March 13. 1895, a reporter for the New York Herald wrote that he came across the inventor  Tesla in a small café, looking shaken after being hit by 3.5 million volts.
“I am afraid,” said Tesla, “that you won’t find me a pleasant companion tonight. The fact is I was almost killed today. The spark jumped three feet through the air and struck me here on the right should “I Could See Past, Present And Future Simultaneously” If my assistant had not turned off the current instantly it might have been the end of me.” 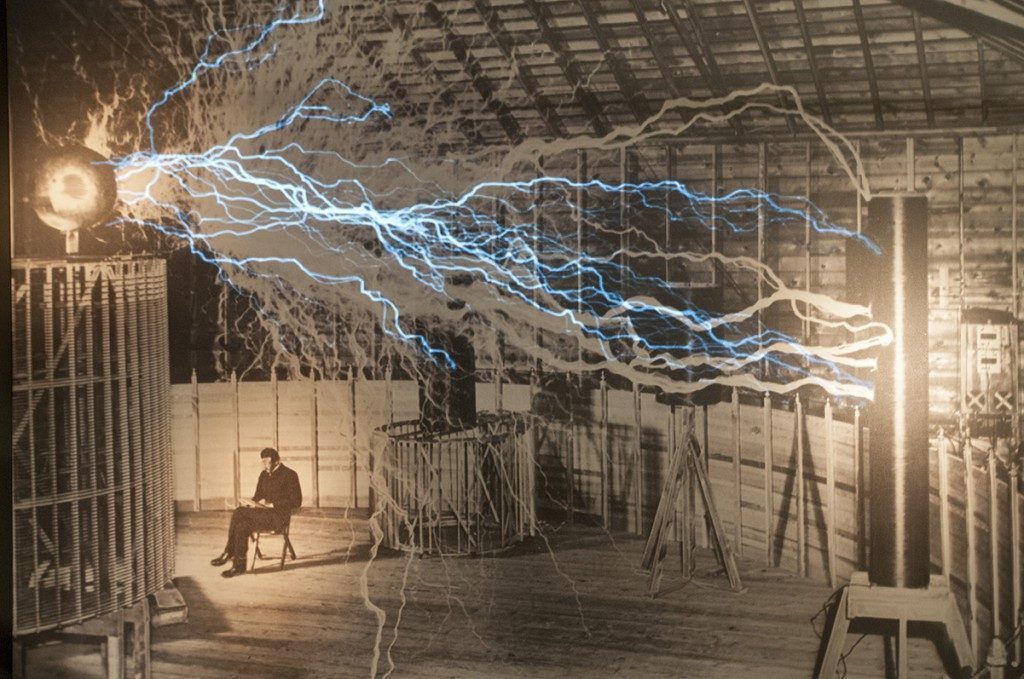 His experimentation with radio frequencies and the transmission of electrical energy through the atmosphere led to his discovery that would, years later, lead to the top secret government projects – the Philadelphia Experiment and the Montauk time travel projects. But even before these highly top-secret military programs came about in the 1940’s, Tesla made some fascinating discoveries on the nature of time and the real possibilities of time travel. 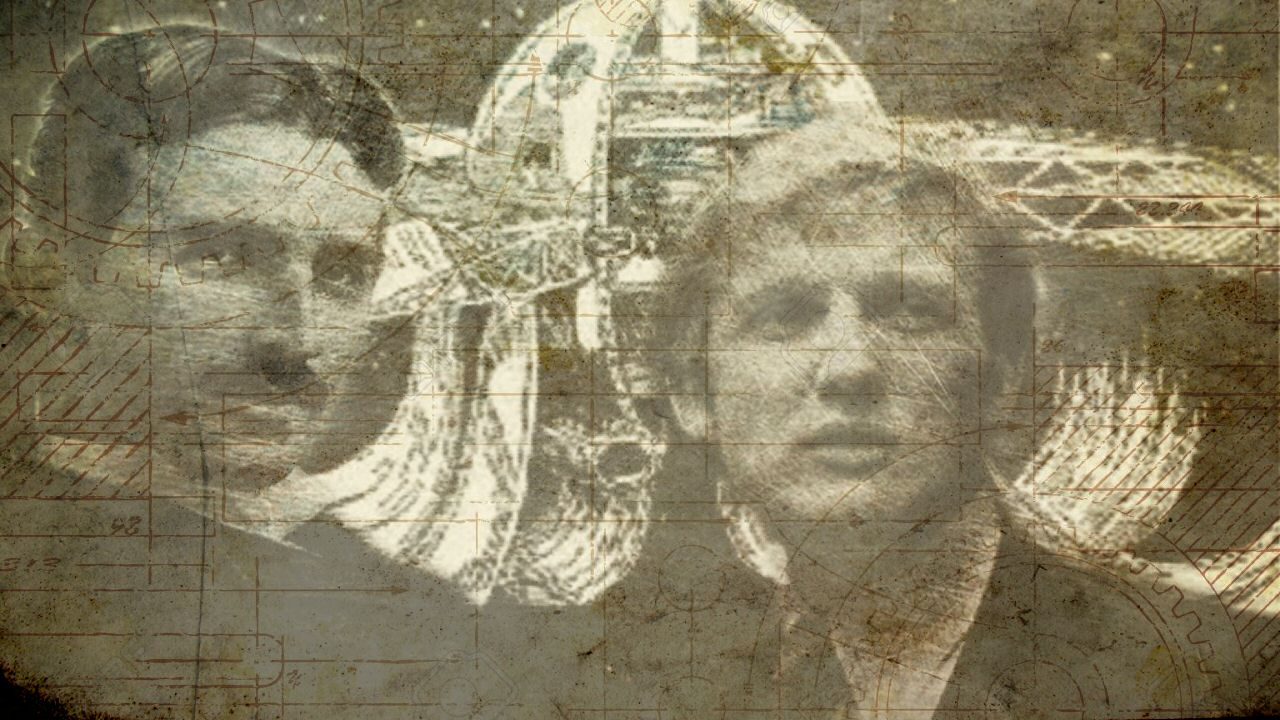 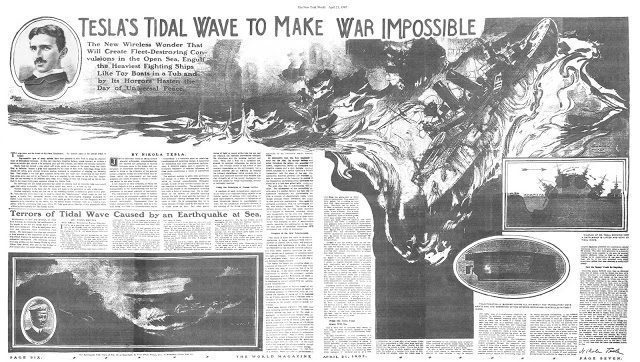 Is it possible that Tesla came from the future, or was he simply born armed with the knowledge of technology to bring about the time when knowledge would be increased as spoken of in Daniel?  Is Tesla’s technology to become responsible for creating a paradox that would bring about the day spoken of in Revelations that time would be no more, ushering in the Day of The Lord?

Was President Trump sent from the future or simply sent to mankind armed with the knowledge of Tesla and the deep understanding of what is to come to pass? Has he been sent to earth at this time in history to help awaken God’s dry bones so they can stand up and become a great and powerful army for the Lord?

Time will tell.  In God’s creation nothing is impossible.  The Bible is full of scriptures of many prophets and disciples who were given the gift to see what shall come to pass by messengers sent by God. John the revelator was shown what was, what is and what is to come.  Whatever the answer is, one thing is certain –  all things work together for good to them that love the Lord.