No Labels Review - TRUMP WAS ON HIS GAME! MILLENNIALS WERE LAME! - The Marshall Report Skip to the content 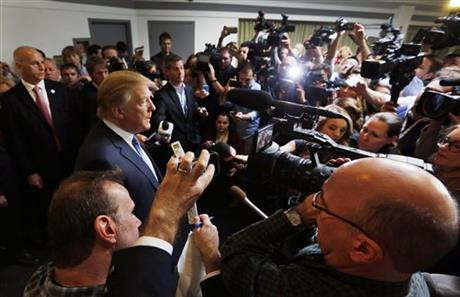 Just watched Trump’s speech at No Label in New Hampshire.  It was great until the question and answer session when the liberal independent millennials  started asking questions that they could hardly get out of their mouths  And when I heard them, I understood why.  Some were just weak questions, but most were not very nice, more like attack questions.  Some of those millennial need to go to California and live under Gov. Jerry Browns liberal policy. Their disrespectful and warped view points would look normal there.

A smug gal asked her question with a snide look and squinting eyes about I, I, I, When I graduate (after listening to her, that is a big if) can you make sure that I get paid the same as a man for the job?  Well, girlfriend Donald isn’t hiring you so he can’t answer that.  But he did…bless his heart. He said if you perform as well as a man for the job yes you will. Then he read off his resume history showing that he has always paid equal and in some cases more.  Meanwhile she stood there with folded arms looking like she was constipated for months complete with a sour faced scowl.  She rudely let him know that she wasn’t finished asking her question, she had several more parts.  Trump allowed her to ask.  She kept her arms crossed and sneered, that she heard he did not like women and something about can she do what ever she wants to do with her body if he’s president?  Trump handled her well explaining he cherishes women, etc.,  and ended with saying he was pro-life.  She stood looking like she needed slapped or grounded for a few weeks.  If she were my daughter, maybe a boarding school would be in order.  Believe me that gal can do what ever the heck she wants to do with her body, who gives a rat?

An Asian kid stood up to call Donald out on something he said about South Korea some time back about they don’t pay anything for our military protection.  Touting that he knew for a fact they had paid $841 and some odd million dollars last year. Trump asked if he was from South Korea and the kid said no he was born in Colorado and going to school there.  Trump responded that amount was peanuts compared to the costs we were paying, he repeated several times peanuts.  He explained why it was peanuts, detailing all that was involved including the lives of our military etc. and the kid tried to interject that Trump was wrong but never quite got that out.  He stood there looking  as though Trump was wrong even though he knew Trump was right.  What is wrong with these kids?   Good grief. They are a mess.

No Labels is a joke.  They are a group of green idiots. Go label that. It’s a Lieberman/ Huntsman fund-raiser – no labels mean they can fund dems, libs and RINOS and act like we are all Americans while they fund their labeled establishment projects like GREEN  JOBS, ENVIORNMENTAL PROGRAMS, CLIMATE CHANGE, SMART PROJECTS, WILDLANDS PROJECTS, SUSTAINABLE DEVELOPMENT AGENDA 21. All across partisan lines.  Good grief no wonder those kids were so messed up.  They don’t know whether to go hug a tree or cut one down to make flutes to blow into as they lead their sorry attitudes off the cliff.

No labels is basically a home for independent screwed up liberals like Lieberman and Graham who don’t fit in any where but want to control something. LOL. It is a rag-tag group of liberal trolls that need to work at Wal-Mart to realize they aren’t all that, and hang out at Star bucks to get caffeinated up on their own sorry ideas, then speed out in mommy and daddy’s basement while they text message their sorry friends about how they really stumped the Trump. NOT!

Trump handled himself very well and put each one in their place without giving them time to squawk a lot.  The camera scanned to show the most belligerent didn’t even listen to his answer.  But, I loved the way Donald addressed the answers to the crowd and didn’t look at their sorry butts acting like brats having tantrums.

A lot of those were memorizers with no common sense. They were so disrespectful and their body language was like 5-year-old brats who weren’t getting their own way. The biggest loser was the guy with the hitler mustache who had a hard question on compromise about some stupid income tax  compromising bill that made little sense???? He really thought he had a gotcha question. Trump somehow schooled the old guy on how negotiating works and assured him compromising is all part of the Art of the Deal, and reminded him that’s why you go in with much more than you’re wanting in order to win. 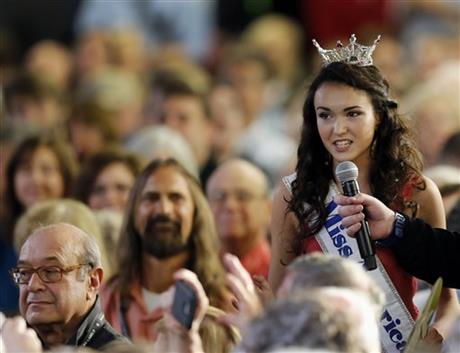 Please forgive me on what I am about to say, but, I have to be honest, that Miss America really looked ridiculous with that crown on her head.  I mean could it be any taller? And her voice was ???? How did she ever win that crown? And isn’t it good to know that she is asking all the candidates how they are going to reduce the national debt of 18 trillion…oops 19 trillion (Donald had to correct her)?  Like she would even understand a good or a bad answer??? Does anyone else’s head hurt?

It was so tiring for decades to always hear the Miss America contestants hit the mics and ask for world peace…now, it seems the buzzword is rid the world of national debt.  Neither one is forthcoming…next question.

P.S. I later found an article that expressed so well what I have written.  Check it out here: