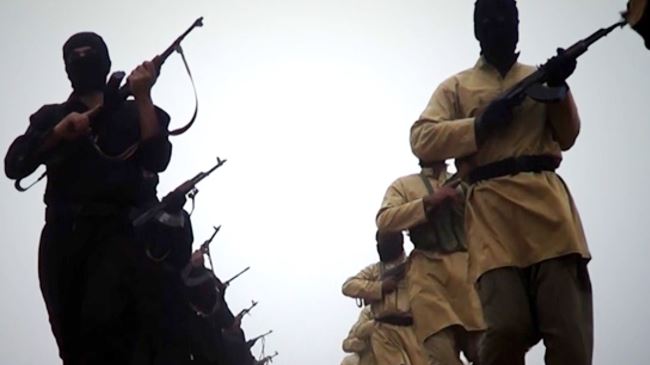 It was not Mohammed that prophesied  Islamic  Armageddon it was the plans of the establishment elite. They call it Agenda Armageddon.  They are doing exactly what the NWO elite have planned.  Below I show you the words of a

letter that was sent to the UN General Assembly  approximately 6 months after 911 the day the Twin Towers fell.  As you can see, all plans are progressing exactly as they have planned.

Which leaves a question.  Is this the same Armageddon the Bible speaks of?  Or is this a feeble attempt to make the Christians believe it is?  If it indeed is the same….read your Bible Revelations Chapter 16 – chapter 18 and see how it really will end. It will not end the way these NWO elite have planned.

The only hope to stop this is to expose their lies and impeach those who are involved.  It is a world wide treason in motion and we the people who make up the sea of humanity must do all we can to stop this evil.

From the video below which is a must watch, the Islamists reveal the following:  “It has a timetable where in the next 10 years, by the year 2025, it hopes to bring about Armageddon, the final struggle between good and evil or between the Muslims and the non-Muslims…And that one of the chief stepping stones to that Armageddon battle is the conquest of Rome, which they think they’re going to be able to do within the next five years, by 2020.”

“Once Rome is conquered…then Israel will follow shortly after”

Read the Rockefeller letter and then look at what is happening at home and around the world.  You will find that all of the refugee chaos and all of the talk of the Islamist to conquer Rome is all set in motion by the same ones that want global governance. For these are the puppet masters plans.  Forwarned is forearmed.  Let us go forward with both knowledge and a prepared plan of action.

Presently the establishment global governance is vacillating between steps 2 and 4 listed below in the letter.  They have already achieved the first step – A complete irresolvable collapse of Middle Eastern peace.  This began with the fall of the twin towers. Bush the younger set it in motion creating chaos in Afghanistan, Pakistan, toppling Iraq and creating chaos in smaller nations in between.  Obama and Hillary fanned the flames with the Arab Spring and their assistance in toppling middle east nations of Egypt, Libya, and their attempt at Crimea,  Ukraine, and Syria.

The middle east crisis has spread throughout Europe through an ISIS Trojan horse full of able bodied young and strong men posing as refugees.   To more accurately describe the situation – Europe is at war with ISIS.

Putin has entered  Syria to stop the evil from coming into Russia as their intelligence has shown was indeed the evil plan.  Topple Syria and enter into Russia.  The evil men in the US administration are in lock step with the global plans.  They hate the people who know what they are doing and dare to condemn their actions.

Trump is the only man who is exposing the establishment lies and their evil actions.  He is the true leader of America.  We must do all we can to stand behind Trump and help save America from all the evil plans.  Open borders is a pathway to all civilization destruction.  Take a good look at Europe and our sanctuary cities like Ferguson and Baltimore.

We still have time to stop this.  We must do all we can to expose them all.

Please read the letter and take note that I have highlighted in bold some of the TAUNTING LINES that dare the world to take in refugees at their own peril.  A damned if you do and damned if you don’t.  Only evil itself is that cunning and sly with words.  We are witnessing the damned if you do right now throughout Europe.

To The General Assembly,

The time of the end is upon us. Like it or hate it, it’s the destiny we must all face. On September 11, 2001 the world was witness to the beginning of the end. What we saw and experienced will be nothing compared to the calamity that is to soon transpire. It is sad that so many lives have been lost and yet so many more will be taken – but these things will continue to happen as this old system begins to collapse. No human government in existence now or since the ancient times have been able to sustain a perfect order. Every government has failed and will fail.

They can not protect you. They can not give you a place where people are truly free, where your neighbours are your family and foreigners are your friends. No human government today can or will ever be able to achieve this. That is why the Agenda was set. It has been referred to over time as Armageddon. But be not fearful. It will not be a nuclear holocaust or some stray asteroid from the heavens that will level our civilization. In fact it’s not the planet that will suffer and be swept away.

It will be the human inhabitants of this great planet who have no respect or genuine regard for their fellow human beings. Each one of you over the next year must do some very deep and sincere thinking. You need to ask yourself these questions: Will I overcome my hatred for my fellowman or will I put aside my differences and unite and care for my neighbour? Will I treat them with kindness? Or will I continue to take advantage of them? When was the last time you took a person off the street and gave them some food or helped them find shelter for the night? Or sat beside someone on a bus, in a mall, on a train and said “Hello”.

When did you last comfort a stranger who had lost someone they loved. When was the last time you befriended someone not because of their possessions or their wealth – but simply because you cared about them? When was the last time you truly showed your human spirit and heart to your fellowman? None of the above is easy. It is hard. None of us are perfect. None of us have had a good life. Some think that because we have suffered to some degree that we deserve what ever we can get – even if it means hurting another person in the process. But those who try and rise up against our negative ways will survive and will be rewarded with a life on earth that right now is only a dream. Only the meek will possess the earth. This is a certainty.

The New System is coming. The only question is: Will you choose to be there? Or will you continue to go down the road to self destruction. It’s up to you. The following Agenda is unavoidable and you will need to endure through to survive and get there. So think deeply.

It’s your future. And may you all do well.

2a) Vatican city and Jerusalem will be destroyed by religious terrorists.

2b) World-Wide Crack Down on all religion. All Religions will be banned. Religion can not be practiced or preached outside the family home.

3) United Nations will establish an interim one world government state, followed by a declaration of worldwide peace and security.

4) Citizens of the new one world state will revolt. Sudden and systematic collapse of Great Britain, Chinese and the United States regional Governments. The rest of the world will fall into anarchy. Billions will perish. Only those of good-will, and followers of the truth will survive.

5) New system government of 144,000 members and 6 million plus subjects will take control.

6) Massive cleanup operation will commence as New World is created. Eco-systems will be restored. Infrastructures re-built. Sickness and disease will be eliminated. Aging will be reversed and the aging process itself will cease. A New restored human family will gradually bring the earth into paradisaical conditions