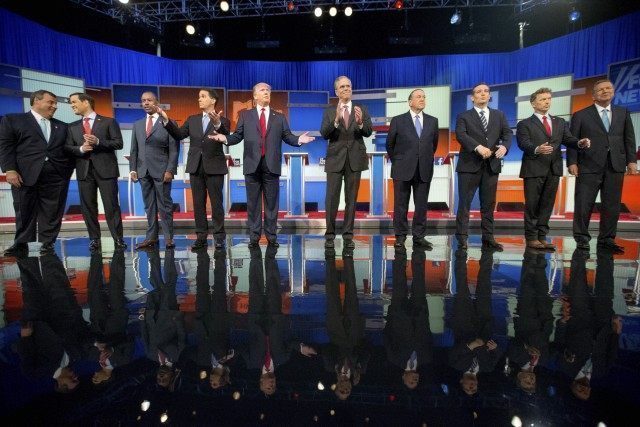 Rubio showed his true colors when Jeb called him out for his failed voting record and the Sun Sentinel news paper article stating he should just quit and allow someone else to take his seat to serve the district. (see link below) Rubio quickly compared himself to others who have acted just as poorly and accused the paper of double standards. The truth is Marco’s behavior is no more excusable than Kerry’s or Obama’s was. He just placed himself in their class “F” screw the constituents rating. Pointing to another’s bad behavior to excuse your own is actually very worse.  It’s a very bad thing to do, a total  fail. Blaming others for doing the same thing as you have done does not let a person off the hook in court, it won’t fly here either. By the way, Marco was the only one of the others who had poor voting records to go on a national debate stage and let the world know he doesn’t vote because he hates being a senator. Maybe that had a lot to do with it?  Ya think?

Cruz did good calling out the moderators for a liberal cage fight, but, he is still Cruz.  Cruz had averted the question of the budget vote having no ceiling.  Great move on his part – Bravo for avoiding a hard question and stealing the accolades of the evening in the process.

Jeb blew it big time calling out Rubio for his failed voting record.  Trump had said early on Jeb and Rubio were going to come to a head, as you don’t run against your mentor.  It finally came to a boil, but Jeb has yet to learn from Trump when you punch first you had better knock your opponent out or be prepared to finish the fight.  Jeb punched and failed to counter punch.  Instead he fell flat on the floor waving a white flag.  He all but said he was sorry.  This morning I am sure he is.

Fiorina gets another “A” for pointing out how long something was discussed.  She memorized the 19 years budget had been talked about and smiled.  So, was there any real substance?  NO.

Huckabee gets the peace maker and vote for Trump award.  Good for him for not allowing the bait to “bash Trump” get in the way of his true moral and values of not telling a lie to please an audience.  He was honest in knowing Trump was the peoples choice and in giving his support to the front runner in spite of his low numbers he truly desired to bring up.

Kasich gets the trying to be the Trump award.  He boasted of his fiscal responsibility and 2 billion cash on hand for Ohio.  Trump, however, was quick to point out the real Fracking truth.  Anyone can be in the black with an influx of oil revenue.  Something Trump later pointed out he would do for America across the board.

Carson gets the “I see nothing, know nothing and did nothing” Award for answering his question concerning  Mannatech. He only recalls  speaking for them a few times and still takes the supplements which either aren’t helping his memory, or he is not revealing all he truly remembers.

Christy was really on his game and he spit back in the commentators faces stressing Rome is burning and this is what you ask us?  There was definitely no crispy crème frosting on his lips.  He was bold, frank and concise.

Rand was there, I think?  He was pretty quiet but, I saw him there.

Trump was the clear winner in the room. He didn’t wait for Cruz to defend the team, when they asked him about his Comic book campaign he blasted back how bad that question was and then tore right in.  He didn’t hold back at Kasich’s mouth flapping when he touted his superior skills in fiscal responsibility , Trump counter punched and did a left hook to the jaw.  It was a big Fracking deal!  The Donald slammed the would be female moderator gotcha question on Mark Zuckerberg and immigration with his now viral, “I don’t know, you people write this stuff” answer. He ended exposing the over inflated cost of debate ad sales and exposed the networks many sins showing his negotiating power so the people could all get the hell out of there in a decent time frame.

Afterwards, the Fox Network was buzzing, happy to find another network under attack.  They pointed fingers and reiterated the glorious GOP candidate team effort to blast the evil CNBC.  As they were pointing out the evil flaws of main stream media none of them, especially O’Reilly ever saw the fingers pointing back at them.  Why?  Do they really believe the public has forgotten the August 6th debate and the very unprofessional commentating theme that they launched?  The only difference was the dirty attack questions were all aimed at Trump.  Which ended in a Fox network boycott.  This time it was appalling because the dirty attack questions were thrown at all the candidates.  But, something happened and the team spirit (the way it should have been at the first debate) kicked in and together they stood up against the lying media exposing their agenda.  Which, by the way was easy for all to see, as the three stooges hold a debate scene unfolded.

Of course  Fox news had a hay day calling Rubio, Fiorina and Christy the clear winners of the debate, as they added fuel to the fallen Bush fire saying he was demoralized.  So, will Fox ever learn their lesson?  Will they ever see themselves as part of the problem?  Narcissists rarely do.  Time will tell.