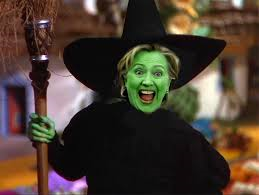 Hillary (Benghazi) Clinton got off her broom and called in her flying monkeys to organize an attack on Sarah (Dorothy) Palin for teaming up with the good people of Oz to rid the land of the wicked ones of the West. Why? Because Sarah clicked her ruby red slipper heels and said, “There’s no place like the U.S.A. and I support Trump to make her great again!”
It seems that the wicked witch of the west has sent her flying furry friends off to Munchkin farcebook land to launch a battering ram against Dorothy, the Munchin’s and their hero named Trump.

But fear not – Sarah (Dorothy) set those flying monkeys on their tails when she told them all the people in the land of Oz have our president’s back…better than you had the backs of our guys in Munchkin Land (Benghazi).   P.S. – all those blue Bernie signs really pop here in the Oz (Iowa) snow.
Click here to read the real full report:
https://rightwingnews.com/top-news/hillary-fires-at-sarah-palin-after-trump-endorsement-then-palin-humiliates-her-with-this-response/
Hillary beware, this go around, the establishment doesn’t have a McCain muzzle on Sarah. She is full rogue and she loves it. Trump and Sarah are an unstoppable team. Throw rocks at your own risk.
Dianne Marshall