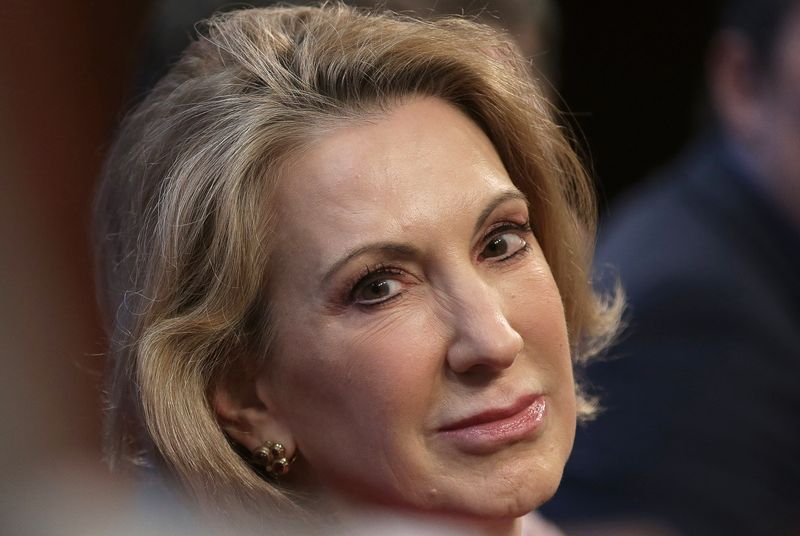 Is anyone else tired of the media’s severe case of amnesia?  I mean no one seems to remember what they said about their GOP darling the day they reported her firing of Hewlett Packard.  It was not flattering, nor was it any indication that any thought she should ever run for a higher office.  In fact no corporation has hired her since.

At the time of Carly Fiorina’s firing in 2005, in a story written by Lloyd Vries CBS/AP February 9, 2005, titled  “Hewlett-Packard Fires Fiorina”,  CBS had this to say:

CBS News.com Technology Analyst Larry Magid had this to say, “She made a lot of changes, including the merger with Compaq, layoffs, and reorganizations. A lot of employees resented her leadership,”

as well as this:

“Hewlett -Packard has recently been losing market-share in the PC business, which put her leadership into question,” said Magid. “A lot of employees resented her leadership, and apparently the board was ready to see her go as well.”  Magid also said, “There was a certain style at Hewlett-Packard before Fiorina arrived. It was called the ‘HP Way.’ It was a very collegial and close-knit company. Fiorina changed all that, and frankly a lot of people at Hewlett-Packard are probably going to be happy about her departure.”

HERE ARE SOME OTHER NEWS REPORTS IN THE ANNALS OF FAUX NEWS HISTORY:

Fiorina Laid Off Nearly 18,000 HP Workers During ‘Restructuring.’ In October 2003, the company announced that under then-CEO Fiorina’s “restructuring” plan, the company would cut 17,900 jobs. [Omaha-World Herald, 9/29/03]

Fiorina Was Fired As CEO Of Hewlett Packard After “Rocky” Tenure Marked by Scandal. “But until recently, Fiorina’s claim to fame was 5 1/2 rocky years at Hewlett-Packard, where she battled the company’s founding families to push forward with a $19 billion purchase of Compaq Computer in 2002, then failed to create the profitable computer giant she had promised. In February 2005, she was publicly ousted by HP’s board, but not before she ordered the first of a series of leak investigations that would spin into a highly publicized scandal.” [Washington Post, 4/2/08]

Fortune: Fiorina More Style Than Substance. “In the midst of all the competitive pressures bearing down on her, and in the struggle of managing the unwieldy company she created, Carly Fiorina sometimes talks as if she sees a vision all her own. She hauls it out in the opening lines of internal speeches, articulating her goal of making HP ‘the world’s leading technology company.’ The ambition is a curiosity rouser because it implies that she has firmly in mind what company right now holds that title. But that turns out not to be true…But then, you wonder, if she doesn’t know who the leader is now, how would she know whom HP has to pass and when to claim victory?” [Fortune, 2/7/05]

Fiorina In “Denial” Describing Her Relations With HP Board as ‘Excellent.’ “Asked to describe her relationship with her board of directors, the embattled Hewlett-Packard chief executive, Carly Fiorina, replied with a single word: ‘Excellent.’ Perhaps she was in denial, or just out of the loop, but Fiorina’s confrontational tenure as chief executive of the world’s second-largest computer company was unraveling.” [International Herald Tribune 2/12/05]

Fiorina Received $42 Million Severance Package From HP. After being “spectacularly” fired from Hewlett-Packard, Fiorina was awarded a severance package originally valued at $21 million, which “disgusted” corporate governance advocates at the time, but then The New York Times reported that the company also granted stock options and holdings valued at another $21.1 million, making her total a severance package of $42 million. Federal filings at the time indicated that HP helped Ms. Fiorina financially with her mortgage, relocation expenses, and taxes to the tune of 1.6 million between 1999 and 2003. The company also, paid for personal travel on Hewlett-Packard jets for security reasons” and helped with $50,000 in legal fees. The jet trips were valued at $184,561 during her time at the company. [The New York Times, 6/6/08, nytimes.com; Associated Press, 2/9/05; Hewlett-Packard Proxy Statements (1999-2005); Securities and Exchange Commission, accessed 3/25/08; The New York Times, 2/12/05]

H-P Spying Scandal Began with Leak Under Fiorina
Leak Investigation At H-P Began With Fiorina’s Tenure, And Later Erupted Into A Spying Scandal. After details of the board of directors’ intentions to fire Carly Fiorina became public in the Wall Street Journal, Ms. Fiorina “demanded a confession” from the directors. Following these demands from Fiorina, an aggressive leak investigation that resulted in a “spying scandal” commenced. The San Francisco Chronicle wrote, “The spying scandal dates to early 2005, when then-CEO Carly Fiorina and other directors began looking into leaks of board deliberations to journalists. After Fiorina was fired, her successor as chairwoman, Dunn, pursued the investigation, which eventually pointed to director George Keyworth. Another director, Thomas Perkins, a Keyworth ally, left the board in protest over the handling of the probe. Dunn and Keyworth also later left after the scandal became public last year.” [San Francisco Chronicle, 3/17/07]

The question is this”  “Was the media lying  then or are they lying now?”

MORE FROM THE ANNALS OF NEWS HISTORY: Fiorina also has the job skill of manipulating wrongful acts into justifiable actions.

Carly Fiorina
Fiorina defended corporate tax loopholes for McCain
Under Fiorina, H-P Kept $14 Billion Overseas In Tax Havens, Lowering Tax Rate To 12%. “By the end of its 2003 fiscal year, Hewlett-Packard Co. had ‘indefinitely’ deferred taxation on $14.4 billion of foreign earnings, according to SEC filings, a move that helped lower its effective tax rate from the statutory corporate income tax rate of 35 percent to 12 percent.” John McCain constantly cites the 35% corporate rate that what he contends is the “second highest in the world” on the campaign trail as the reason companies shift resources overseas. [Washington Post, 1/2/04; Pittsburg Tribune-Review (Pittsburg, PA), 7/9/08]

Fiorina Admitted That As CEO, She Kept “Billions” of Profits For HP By Parking Income Overseas. Carly Fiorina pointed out at an economic roundtable with John McCain that, as CEO of H-P, she purposefully parked “billions” of cash overseas to avoid paying taxes. She said, “The tax rate for us had a huge impact in terms of where we parked cash. And, of course, cash is important in a business, so when we looked at the tax rates here, and what it would cost to bring cash from overseas to here, we left billions of dollars of cash overseas, because of the differences in tax rates.” [McCain Town Hall and Roundtable, (Milwaukee, WI), 4/16/08]
Fiorina Called the Outsourcing of American Jobs ‘Right Shoring.’ As HP CEO, Fiorina made comments in Washington alongside Intel’s CEO that “drew an unusually strong reaction from workers, who suggested the pair forfeit their own highly paid jobs to Chinese or Russian executives working for a quarter of their pay.” Fiorina said that “there is no job that is America’s God-given right anymore” and had also said called what is generally referred to as “offshoring,” the outsourcing of jobs to cheaper labor centers overseas, as “right-shoring.” [San Francisco Chronicle, 1/9/04; Investors Business Daily, 1/8/04

Fiorina Twice Equated Mortgage Crisis to Toy Recalls. On a conference call with reporters Fiorina equated the mortgage crisis with a “product recall.” Fiorina said, “‘When a company has a defective product…those companies routinely bear the expense of a product recall,’ she said. ‘That is what John McCain is asking the mortgage industry to do.’” Days later, she made similar comments to Newsweek, saying “When the technology industry puts a product out that they believe might harm their customer, the company bears the burden of recalling that product. I think the mortgage companies and the banks should step to the plate and say, ‘We have put products out there that have harmed our customers, either because we didn’t explain them well, or because we pushed them into homes or mortgages that they couldn’t afford.’” [Washington Wire, 3/25/08; Newsweek, 3/31/08]

It’s all about telling the sheep what you want them to hear, putting a news stamp on it and hoping no one remembers what you said or did in the past.  It’s working for the news and definitely working for Carly.  After all, this is how media propaganda works right?