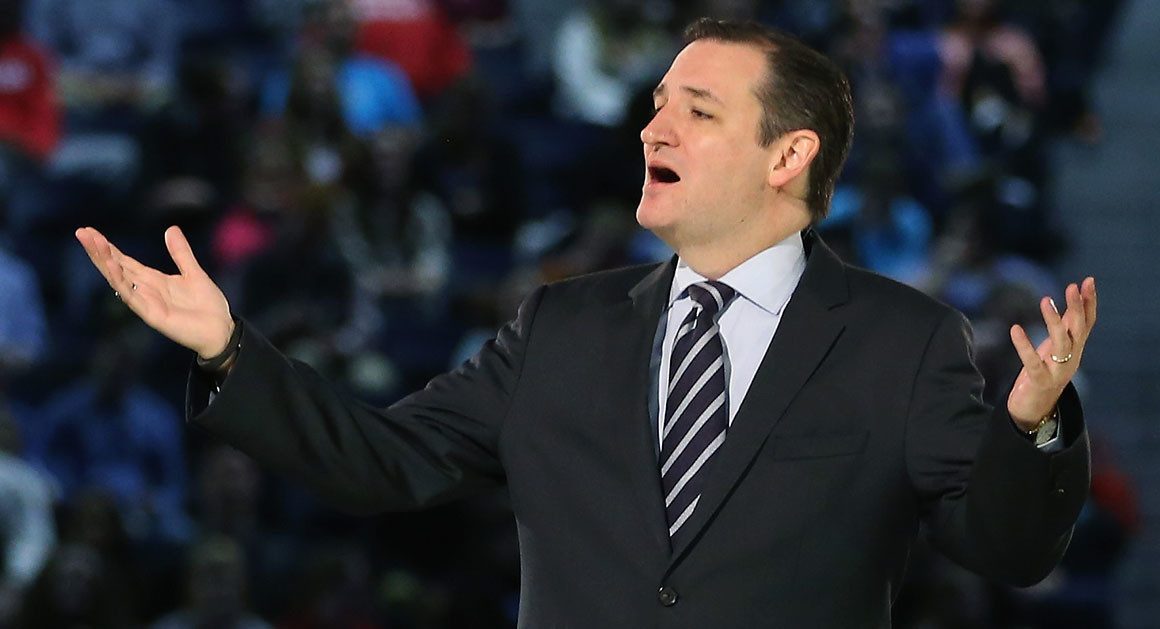 I have to say I read this article about Ted Cruz and I just loved it!  I wanted to give it a hug.  It said exactly what I have been feeling and trying to point out.  I have called Cruz the Shakespeare guy because of his flamboyancy when delivering a speech to his audience on stage.  It’s quite a sight. Now I have had a confirmation from another observer.
I mean if you haven’t seen Cruz in action. You haven’t seen Cruz. Imagine you are at a speech he is giving and you are in the front row.  You are now watching him.  He says a few memorized words then goes into an arm thrust pose, followed by a dramatic speech as he poses for a moment (which to me seems like an eternity) then he peaks out of the corner of his eye in a very coy (but obvious) manner to see if anyone is watching. When he sees they are, he grins. Then he thrusts his other arm out, shifts his stance and touts a few more dramatized words, and repeats the same eye peak, smiles, then struts center front and repeats the same. It’s as though he rehearsed for hours.  I mean it really is a sight to behold.  I can’t help but wonder at just how grand he must see himself in his own minds eye, and then I giggle at what he really looks like to me and others who aren’t drinking the Kool-Aid or as Texans say, the crude (Cruz) oil.
So when I learned from the article that he had a life size oil painting of himself hanging in his office, I was not surprised.  I actually nodded as I snickered. When I learned that anyone who ever worked for him didn’t like him, nor have good things to praise him for, I was not surprised.  Even George W. Bush, who’s campaign Cruz worked on in 2000 said, “I just don’t like the guy”.


And of course, we know he has alienated himself from almost every one in the senate and congress for his past annoyances, and deceptive actions. Even though Cruz views himself as one who pays the price for being an outsider who challenges the status quo, clings to principle and never backs down, even if being caught means you have to call McConnell a liar and break senate ethics rules doing so.  Cruz feels justified by saying they just don’t like him because he’s an outsider.   Trump called it acting a bit maniac.  Which now, after hearing all the evidence….I can full heartedly state that Trump was right once again.
Imagine the music to my ears when I learned that he’s unable to work with others, not even those who are supposed to be his closest allies.  Definitely not a team player and at the same time my fear.  What if????
A recent New York Times editorial by Frank Bruni (see link below) said it quite well in a scenario based on Cruz’s past history of working with others – any serious employer  would not hire him. I’m sure if he were on the ‘Apprentice’, the team mates would call him out in the board room enough times that Trump would eventually have to say, “You’re a nice guy Cruz, you got a hell of a lot of potential.  But, unfortunately I have to listen to your team mates here.  You only showed up for half the tasks, you belittle and talk down to the others.  Cruz, they hate you.  Did you hear what your team said about you?  I have to say, Cruz, you’re fired.”
The author of the article (link below) that I highly recommend for all to read, said, “As Texans, we already know this – he’s done nothing at all for our state. It is up to us to publicize this at every turn until Cruz loses. The stakes are far too high for us to be complacent. We must share the fact that we know all too well with the rest of the nation — that when you Cruz, you lose.”
Read the article and you decide.  I am smiling for once again, my gut feeling was right on target.
A must read:  https://www.burntorangereport.com/diary/31430/everyone-who-has-ever-worked-with-ted-cruz-despises-him
Dianne Marshall