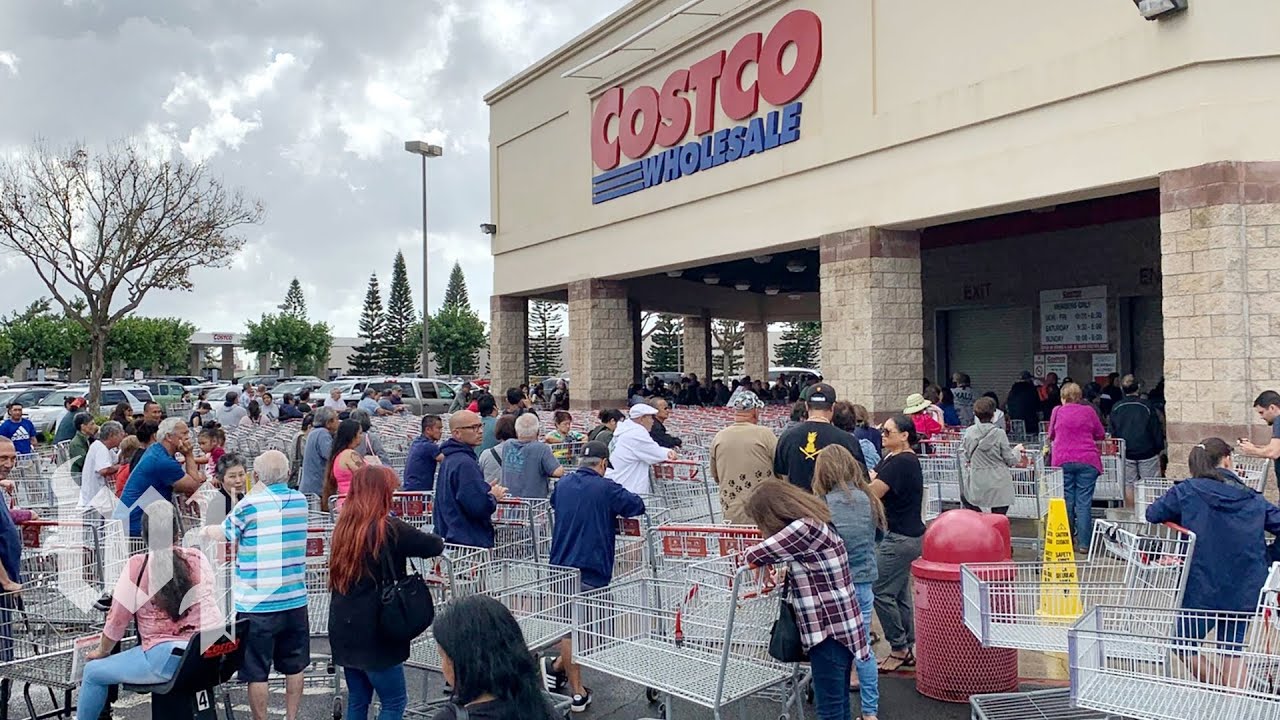 What do people buy in a crisis? What if all the so called ESSENTIAL businesses to buy food and items are ESSENTIAL to track what people buy when operation Mocking Bird is at its’ peak? It would be far easier to do such tracking through chain stores than mom and pop businesses.
What could be gained from this? Why would this information be important? Do they want to insure that the items people purchase are available in larger quantities for the next round? Or are they wanting to know what items people depend on most to insure those items are not available?
Before you label me a tin foil hat wearer with (now) to much time on my hands and thinking up crazy conspiracies….note it is in the hands of state governors to decide what is ESSENTIAL and what is NON ESSENTIAL.


Has anyone thought about the sanity of “It is dangerous to go into a restaurant, even when practicing social distancing and wearing a mask”, but, it is okay to go to the same restaurant and buy the same food made by people who may or may not have the virus by going to the drive through window and paying for it with your contaminated hands, debit cards, charge cards, or cash? People who could have coughed on it, fixed it on a contaminated surface, or who knows what? But, order your pizza and have them take it to the door and pay for it in the doorway? How do you pay them six feet away? Do you throw the money or your card at them? Do you attach it to a fishing rod and cast it over to them? No…you stand close to them and exchange the form of payment for the item. Does this make sense to anyone? 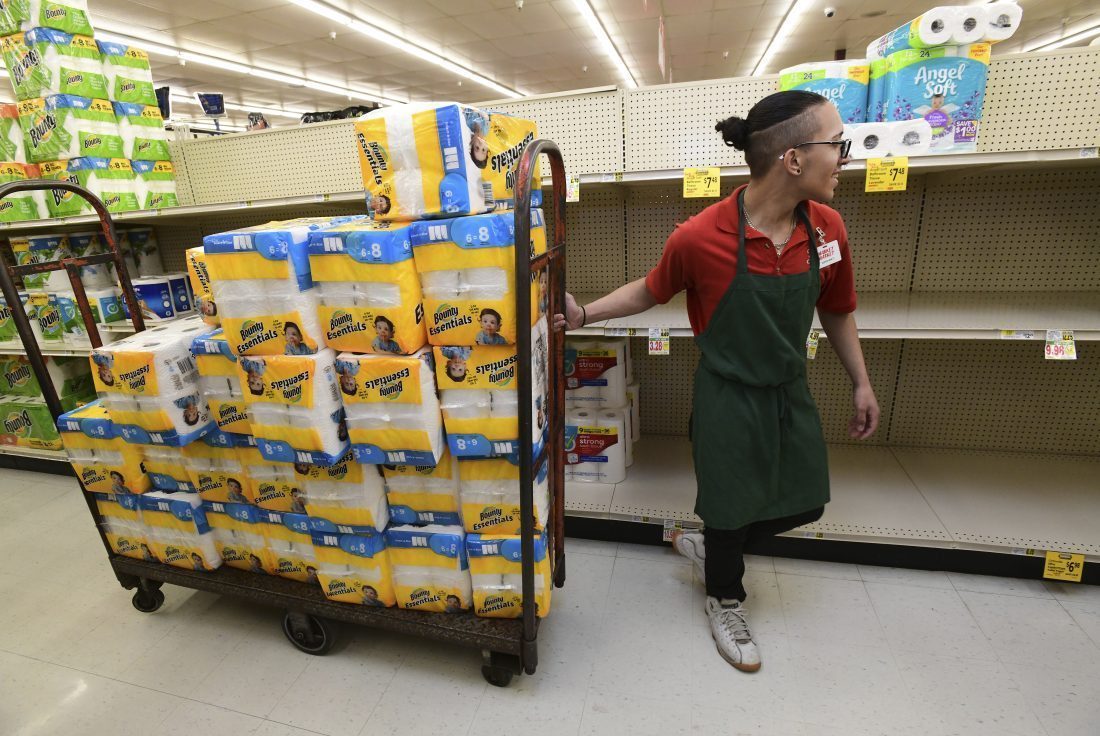 Let’s move on to Walmart, Target, and chain grocers. It is okay to herd people in controlled CROWDS to these ESSENTIAL stores, but not to small shops where fewer people could be exposed? You can’t buy flowers from a non- essential flower shop but you can buy them through the mega chain store? You can buy produce that is open to the air, came from a truck, and in some cases across the border, but you can’t buy it from locally operated, home grown market stands? They aren’t essential when you have big chain herding taking place. In some states, Governors, and or Mayors have decided you can’t buy seeds, and whatever they consider to be NON-ESSENTIAL items. In some cases this includes clothing. 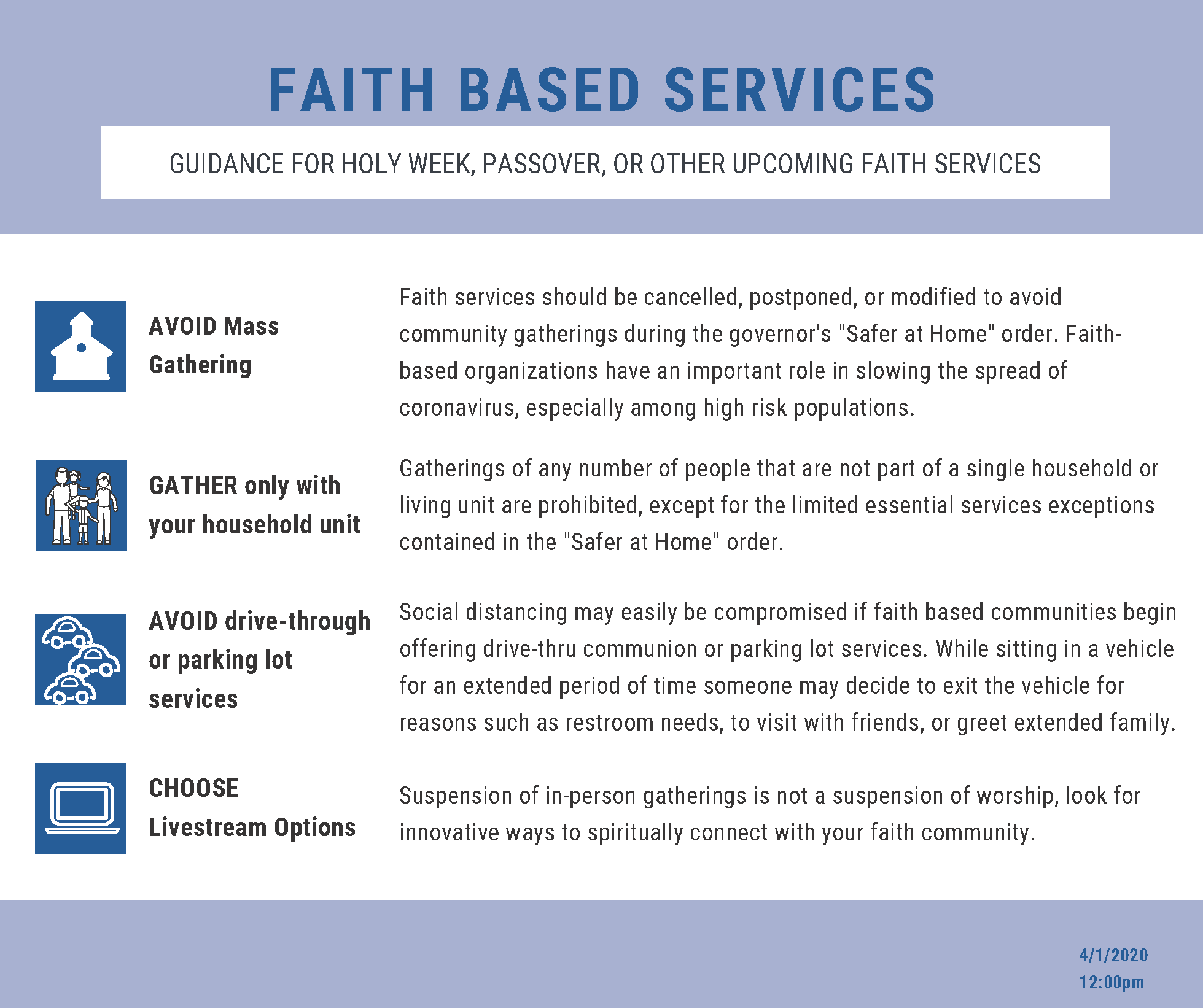 During this crisis, stores are reporting what people are buying. One report shows that people are buying shirts and tops but not many are buying pants. Why is this important?
How many have noticed which suppliers are now charging more for items such as toilet paper? Which stores are charging more for ESSENTIALS and which stores are not?
Some cities are not allowing the sale of electronics. Some say you can call a repair man into your home, but, you can’t have a relative or a friend over? 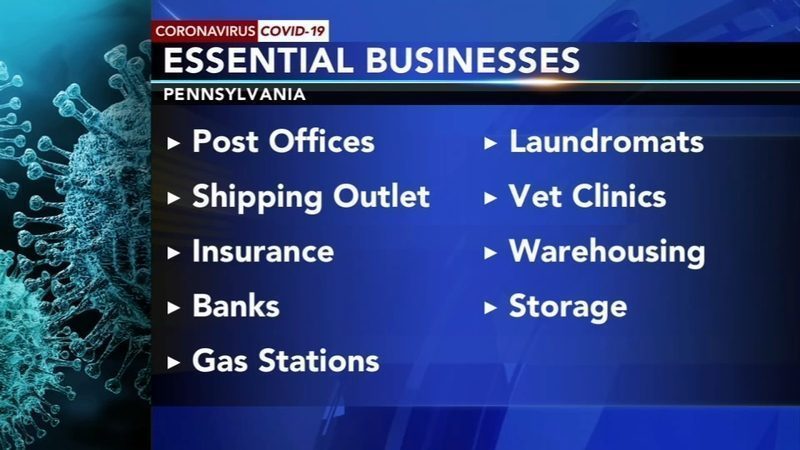 Some municipalities have imposed jail time and steep fines from $100 to $1,000 for gathering in public places. This isn’t just New York who topped the chart with $1,000. Small towns in the state of Illinois have imposed up to $750 for going to places and not social distancing. Like river parks, golf courses, and public parks, even your own private property. If you have family or friends over for dinner, prayer meetings, or just plain visiting…you can be fined if your neighbor turns you in.
Dr. Fauci (whom we all now know as we see him daily) has said he believes peer pressure is the best way to enforce social distancing. Let others pressure them or shall we say tattle tell on them if they think they are not isolating properly. That sounds like what Hitler did to those who helped the Jews. Turn them in. Peer pressure followed up by mandates, arrests , fines and most who know history, know the rest of that story. It was a holocaust.

The governor of South Dakota did not shut down her state and it is business as usual. Few cases of the virus and no out of control tattling and hysteria that we are all going to die if we touch something like our face.

We now know that the CDC has issued forms for doctors to fill out showing them how to declare patients deaths due to COVID-19. On their own form they use an example of a 77-year-old male with a 10-year history of hypertension and chronic obstructive pulmonary disease (COPD) presented to a local emergency department complaining of 4 days of fever, after admission and dying of respiratory failure, that was diagnosed by a doctor as Covid-19, THEY ARE TO DECLARE THE DEATH DUE TO THE VIRUS.
It reads:
Comment: In this case, the acute respiratory acidosis was the immediate cause of death, so it was reported on line a. Acute respiratory acidosis was precipitated by the COVID–19 infection, which was reported below it on line b. in Part I. The COPD and hypertension were contributing causes but were not a part of the causal sequence in Part I, so those conditions were reported in Part II.
They are instructing doctors how to do false reporting. Even when tests are not done and when testing was not available. Click here to read the PDF INSTRUCTIONS
Many doctors are exposing this.
https://twitter.com/i/status/1248279277033971715
Many good doctors have reported this on deaf ears and are going unheard. Main stream media is not reporting on any of the fake and misleading number of deaths due to COVID-19.

WHO and the CDC have been misrepresenting the numbers of COVID-19 case deaths. Why?

The entire COVID-19 pandemic, the numbers, the dangers, etc., are all suspect once foul representation has been discovered and exposed by the public. Which leads us to the bigger questions. What are they doing with the crisis?

We now know COVID-19 is a man -made virus from a Wuhan lab. Chinese Doctor Shi Zhengli was part of a team that working on a coronavirus project jointly with US doctors in 2014 before it was shut down by the DHS for being too risky. After the US research project was shut down, Dr. Shi continued her coronavirus research in Wuhan, China. Full story here

The Department of Justice on January 28, 2020 released a report showing a Harvard University Professor and Two Chinese Nationals were charged in Three Separate China Related Cases regarding COVID-19.Read full story here.
We have since learned that China, WHO, CDC, and Bill Gates have collectively worked on predicting the COVID-19 virus pandemic, and fear not, they have a vaccine on the way. Since Trump is at the helm and acted swiftly to expose the origin of the vaccine, Gates has pushed the rollout of his vaccine in a desperate attempt to so called, save the world at the expense of the death of 7,000 children who his people have tested the vaccine on in South Africa.
Dr. Fauci said, there just isn’t time to test on animals…how be it, that would be the better way to do it. But, fear not, the media isn’t reporting the deaths of 7 thousand children in Africa…nor are they talking about the money to be made by Fauci with the WHO Bill GATES VACCINE and their plans to mandate it to the USA via CDC and to the world. If, that is, they get their way. 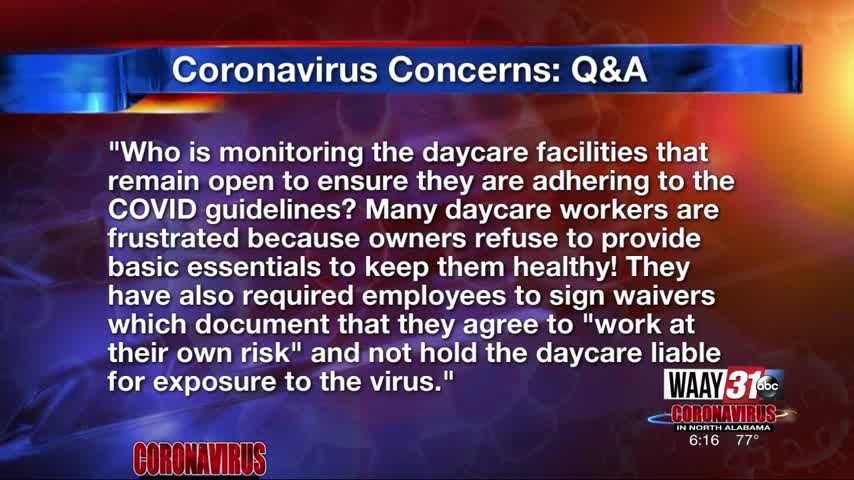 Meanwhile, never let a crisis go without taking advantage of it. That is the motto of the deep state. So, what will they do with all the data they are collecting? Will they really believe Americans just laid down their constitutional rights in lieu of global health mandates and fear? I don’t think they have taken into consideration the other tattle tellers, not the ones pointing their fingers at those gathering in numbers more than 2 or trying to go to church….I’m referring to the ones who are digging in the rabbit holes and finding out what has been taking place behind the curtain in Oz. What Gates has done with his pandemic practice group at the 201 Event. WHO, CDC, AND GATES Global health think tank, on schedule and chugging down the tracks with a coronavirus vaccine before there is even a publicly known corona virus pandemic.

We are now witnessing how our governors, Mayors, and local council members handle a pandemic crisis where they get to call some emergency action mandates. Which leads to the question of – IS YOUR CITY AND STATE KEEPING YOUR CONSTITUTIONAL RIGHTS IN CONSIDERATION FIRST?
Or are you witnessing abuse of power, however it rates on the scale of abuse from 1 to 10. Or in some cases from constitutional rights preserved to tyrannical control. Attorney General William Barr has his eyes on the scale. I know because he announced that.
So far he is backed by the Department of Justice looking into states that have crossed the line with freedom of religion…we’ll see what happens, if anything, to those who are found guilty. 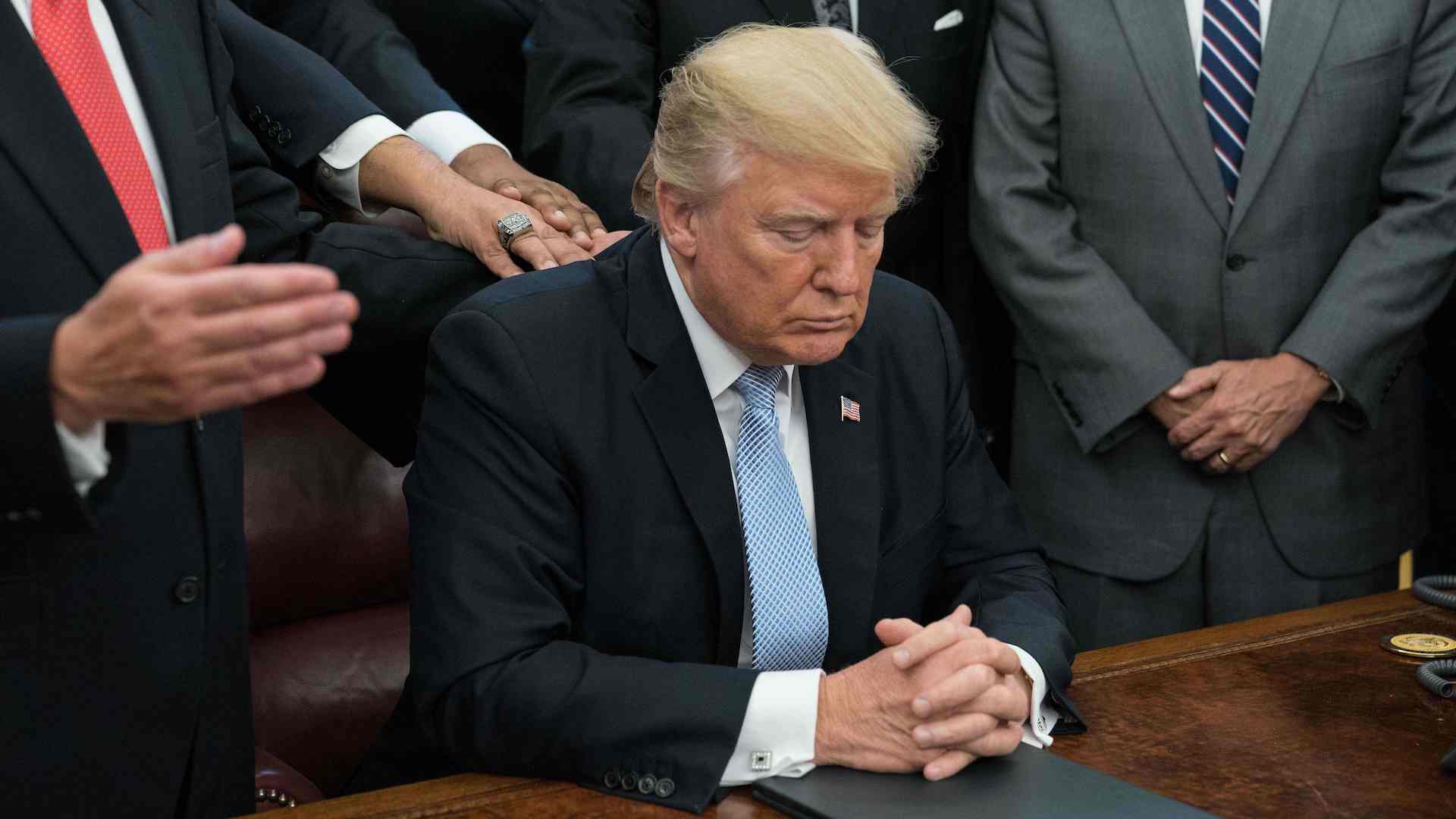 Remember to pray for our President Trump and all those in leadership.  Know that our most powerful weapon in this time of world crisis is our Lord and Savior, King of Kings and Lord of Lords – stay strong and fear not. Use discernment in all things and stay safe.
Dianne Marshall