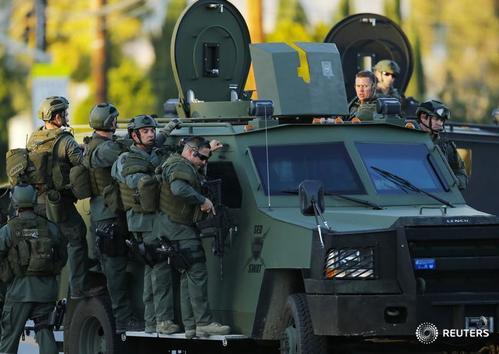 Liberals and that state-run mainstream media keep trying to make the terrible Islamic terrorist massacre in San Bernardino, California, appear as if it was a “lone wolf” attack, but new evidence in a report obtained by Fox News may completely blow up that narrative:
Read more: https://www.thepoliticalinsider.com/what-the-fbi-discovered-in-terrorists-bank-san-bernardino/#ixzz3tuEa3Hl3
The story from the link above presents a very interesting narrative that I cannot help but to compare to stories of what happened in Colombia during the Drug Lords and Cartels in the 80’s and early 90’s. Basically they took over the corrupt government. Everyone from the police, government officials, to the people on the street had their hand out for a pay- off to keep quiet, perform a task, bomb something, or whatever, and no one would rat on anyone.
In many cases a drug lord would test the loyalty of a common person on the street by having them perform small tasks.  Like delivering letters, drugs, etc. After the common person proved they could keep their mouth shut and perform the task with loyalty, they would use them as decoys in bigger tasks.  In one case that is true, Pablo Escobar, the most notorious drug lord in the world at the time hired one of his young patsy’s who had delivered packages to get on a plane to America.  His mission was to record the conversations of the men sitting opposite sides to him on the plane. The young boy was proud to do the job and had no idea what he was truly involved in.  He trusted Escobar.
The two men Escobar was targeting who were supposed on the plane were a Colombian presidential candidate and his advisor who at the last minute did not board the plane.  Meanwhile, the young patsy was on the plane in flight and heard two men speaking across the isle and turned on the tape recorder.  When he did it exploded and the plane blew up.  The young lad had no idea that was going to happen. It was a failed assassination attempt, but the lad died all the same, and no one cared. He was disposable.
The comparison I am making is relative to how some people are hired because they show trust and they perform an act that they are paid to do, they are supplied with the things they need and they carry the task out in trust.  Even for evil men, as in the case of the lad for Escobar. For whatever reasons they trust these charismatic individuals and or people in power and are proud to associate with them.
So in the case of the San Bernardino shoot out, what if the man and woman duo were paid and supplied by someone else, like the CIA.  The same CIA who trains ISIS and other Islamists to fight in the middle east?  What if they thought this was going to be a live training drill? What if the government was paying them to do this?
What if they thought they were going to just get into the SUV and drive off as part of a drill?  What if they were the ones shot up in cold blood as many of the internet reports have indicated? After all, there was no blood in the SUV or leading from the SUV to where their bodies were. The blood was only found around their dead bodies. Remember the bodies had their hands cuffed behind them in the street.  There is no loyalty among those who devise evil – remember the drug lords and the corrupt Colombian government.
Or what if they were paid to actually perform a Jihad and were told they would be protected?  What if they were given money to do this and they gave some to their mother?  What if the pipes and weapons were planted in their house by others?  And what if the FBI can track the money down to CIA and or Homeland Security sources?  There are a lot of interesting directions in which to look at this mysterious event.
After all. it is hard to believe that it took over 1000 officers and special forces to apprehend a male and female duo.  Remember the film footage of every square inch being blocked off by police and armored vehicles?  Remember the helicopters and the live google earth satellite footage.  Then remember the SUV got passed them all.  Something does not sound right.
https://www.thepoliticalinsider.com/what-the-fbi-discovered-in-terrorists-bank-san-bernardino/
https://en.wikipedia.org/wiki/Pablo_Escobar
Dianne Marshall