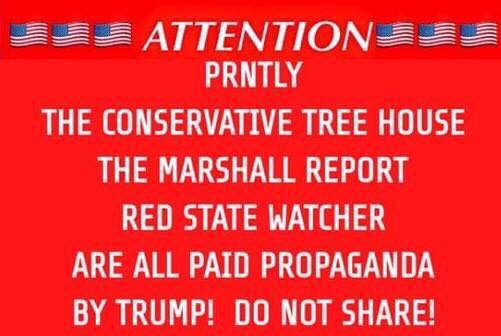 Here we go, all of Trump’s key soldiers in the campaign battle are once again being accused of being paid by Trump to write on key issues and events.
Now I know who added the article about Bill Mitchell for sure.  After it proved to be false, I had suspected it…but I was duped.  Now, more lies.
Seems like Ted Cruz Camp supporters are really low shills.  Just so you all know….none of the people on the list in the red (for danger and warning) photo are paid by Trump.  This is an evil effort by James Bowman a Ted Cruz supporter to harm Trump supporters efforts.
UNLIKE CRUZ SUPPORTERS, TRUMP SUPPORTERS PROMOTE FOR FREE.  We don’t beg for donations, and we do not lie, steal or cheat.  When we get duped into believing false stories promoted by the Cruz camp we promptly admit it and apologize.  That has only happened to me twice, and only since Cruz threw off his sheep costume.  The wolves are out and gnawing at bones all through the night.
I didn’t know this was going to be a war.  I thought it was an election.
Dianne Marshall
https://www.youtube.com/watch?v=jAwOYBUv5eA