Where is the news on this?  Where is Paul Ryan?  Where is Lyndsay Graham?  Where is Obama?  Where is Rubio?  Where the heck is anyone with the real news instead of the lies and skewed news?  Really, there is more all out effort to oust Trump than there is to catch ISIS and other Islamist Terrorists?  And just why were we training to Afghan Islamists to fly friggin planes?
Well, they are somewhere in the USA.  No body knows for sure. They went missing  December 8, 2015, the same day Trump held the famous rally that sung his words around the world to stop importing Muslims until we had a better vetting system.

FROM THE ASSOCIATED PRESS:
MOODY AIR FORCE BASE, Ga. (AP) — Officials say two male Afghan nationals being trained at an Air Force base in Georgia have gone missing.
In a news release issued Tuesday night, base officials said the two students didn’t report on Monday to “their regular maintenance training” with the 81st Fighter Squadron at Moody Air Force base, located near Valdosta, about 230 miles south of Atlanta.
The release notes that the two men have been at Moody since February 2015 and “were screened prior to their arrival in the United States more than a year ago.”
The release adds that federal authorities are searching for the students, who have been training “alongside American counterparts for the entirety of 2015 …”
AJC.com reports that the 81st Fighter Squadron was reactivated in January to train Afghan airmen.
There seems to be a pattern for this administration to train moderates and have them go AWOL.  First overseas and now here.  How many more have gone missing that we are not aware of?  Were they given a plane?  Just asking. 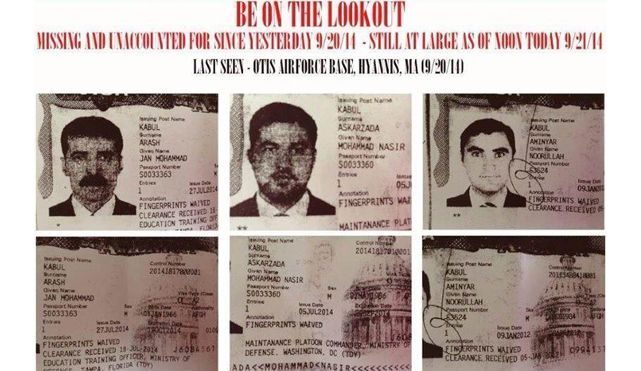 Well it seems quite a few go missing and the Pentagon downplays this danger of soldiers who visit and vanish.  They get free training and who knows what else, then somehow they disappear. Why do they keep doing this if the disappearance rate is so high?  Or did they really go AWOL?  Were they helped in their disappearance?  Were they placed somewhere by design?  We may never know the truth under this administration.
———————————————————–
Please watch the video below and learn about the USA, and the Muslim Brotherhood goals to build an Islamic state around the world.  Remember Obama supports the Muslim Brotherhood.
This is very revealing to see what the end game of Obama’s refugee program push is all about. It is well worth taking a look at.
https://www.youtube.com/watch?v=E3oJ0TGuLi8
Dianne Marshall