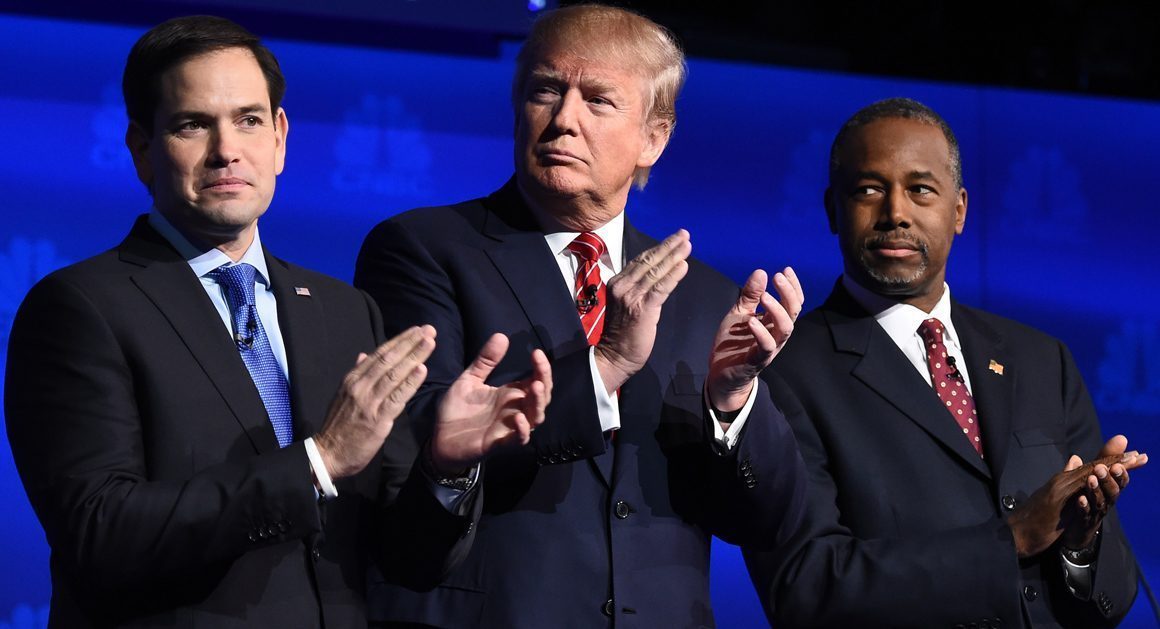 Trump was the clear winner of the debate by speaking the truth and standing up for what he believed with sound facts, asking politely for someone to stop Carly for interrupting everyone and down right being presidential among a panel of misfits. Carly thought she zinged Trump with belittling his meeting with Putin and declaring she had a real meeting with him, which was later found to be a lie (details below).  Trump gets an A for letting her ramble on and not counter punching, it would have been an easy  knock out for Russia has endorsed Trump’s candidacy and is eager to have him visit once he is officially president. The Mayor of Yalta in Crimea even toyed with the idea of naming a street after Trump.

Carly sounded just like Hillary and was twice as hard to look at. Did you see her face all winced up?  Marinara, I mean Fiorina, was just a witch spelled with a B and twice as irritating as she has ever been.  Her foreign policy is no different than Hillary’s and bound to create WWIII after she genders the other nation leaders to shame. That is, all but Putin who will eat Fiorina alive with real cold hard facts .  If anything, he will definitely not  be asking to meet with her not even in a green room where he met her once before.  Yes,  Fiorina lied. Fact checkers  revealed as soon as the debate was over that Fiorina’s real meeting with Putin was a lie.  It was a low narrative green room seating arrangement where her speech preceeded his. I am sure she was snubbed by Putin, and she wants to get even by not talking to him.  Witches spelled with a B are caddy that way.

Fiorina gets extra points taken off for exclaiming she had more entrepreneurial experience than anyone on the stage.  I guess she did not see the Billionaire Frontrunner  Trump center stage, nor did she realize how stupid and witch spelled with a B that looked like to others??  Fiorina lost more points by supporting amnesty and the TTP act as well as almost foaming at the mouth at the delight of becoming president to punish other nations like Syria and Russia for simply not liking them?

Rubio gets the new puppet of the year title after ring leading the amnesty dream act and now back tracking just a little, but mostly for his gangster comments against Russian super power leader Vladimir Putin.  He clings to the Obama/Bush failed foreign policy of war on terror and the same toppling nation concept that has created a middle east war now world wide.  He has the same foreign policy ideas as Hillary Clinton but fails to make the connection. Both want to commit an act of war by having no fly zones.

Rubio gets an A for less sweating and water drinking, but flunks when it comes to understanding America’s finances and the costs of all his dream ideas.  On finances, he is of the mindset that there is a printing press at the U.S. mint, and as long as that is operational, we will never have a money problem. In summary, Rubio’s goal is WWIII, open borders, free stuff for illegals, TTP act and justifying all past failures.

Kasich seems to believe that he can fix the national debt but Trump reminded him he may have to find a lot more oil in Ohio or the other states to pull it off under his plan. His banking ideas made little common sense and he found it hard to make them cognitive to the listener audience.  I think inside his own head he never really understood what he meant either.  He threw a fit to have his turn to talk and when he got it, each time he rambled and went past the buzzer. He attacked Trump and finally Trump told him he could care less what he had to say.  He wasn’t a billionaire.  So Trump made a good point that if you are going to bla, bla, bla about your keen financial wisdom, you had better have your own personal successes in order and not just lip service.

Ben Carson was there, I saw him.  He did lay low and got a star for being found that he did stab a kid with the intent of murder, and did try to hit his mother in the head with a hammer.  And convinced everyone he did not say he was offered a scholarship and turned it down. Even though that is exactly what he said and still says it.  He received an applause for that.  Oh my head hurts.  Other than that he is for TTP another failed act like Obama Care and wants to promote an IRS  tithe tax on the nation.  Making it more Holy or something, for a tithe is unto God not unto Caesar. Carson also wants to eliminate all deductions, including  mortgage interest payments and charitable donations.  He rambled some idiotic philosophy about having it like it was prior to 1913?  Hello Mr. Carson????  The income tax prior to 1913 was not permanent, nor were the structures so complicated.  The 16th Amendment to the Constitution in 1913 made the income tax permanent, but withholding tax on wages wasn’t  introduced until 1943. This new concept  increased the number of taxpayers to 60 million and increased big governments tax collections to $43 billion by 1945. This deduction allows to offset household income not seen by the individual and profited by banks.   Oh my head hurts.  He wants to give amnesty for all illegals including murderers and thugs for we can’t make distinctions.  And we are, after all a Christian nation, apparently without laws. He fails to realize the Bible also says to follow the laws of the land. Back then, those who failed to do so were either stoned or punished according to the law that they broke.  No where is it Biblical to ignore the laws of the land unless it goes against God’s law.  Carson needs to venture out of Poverbs and read the other passages.  (Note: Proverbs is misspelled to match the same way it is spelled on his altar at home which is Poverbs.)

Ted Cruz orated like Shakespeare again and did quite well. There were a few times he had to step it up to finish after the timer went off, but for the most part he woke up the press with the thought of illegal journalists crossing the border and pushing their pay scale down.  That was a highlight.  He also claimed to be against TTP although he did vote for it and dog gone it forgot to blame McConnell for it again.  He got in his fathers immigrant story (again) and failed to mention they ventured on to Canada with his American Mom before he was born.  Other than that it sounded a lot like bla, bla, bla with drama class poses.

Jeb Bush really scored no points other than he stood smiling in wonder 95 percent of the time.  That has to count for something. He did add his two cents on the illegal immigrant issue to get people back on what he felt was important by stating,  “Even having this conversation sends a powerful signal.  They’re doing high-fives in the Clinton campaign right now when they hear this.”  So, either it was painful for Jeb to hear the debate or he just wanted it to end?  Not sure.  He also rattled something against Trump that U.S. is not going to be the world policeman.  Which Trump was not saying that?  It was a moot point for we all know that INTERPOL is for world policing, and not to be confused with the Bush doctrine of  war on terror which includes nation toppling and resource redistribution, along with appointing new regime heads and borders. That is what Trump was opposing.  Those things.

Rand Paul did pretty well until he tried to correct Trump on China and definitely misspoke.  Fact checkers pointed this out minutes after he opened his mouth.  Trump came back at him with currency manipulation but Paul kept rattling his bla, bla.  He did support that TTP was a disaster and poked at the flaws in Rubio’s spending proposals and attacked his conservative platform, “You can’t be conservative if you’re going to keep promoting programs you’re not going to pay for.”  Well, sure Rubio can…that is how he manages his personal finances. Adding things into his budget he isn’t going to pay for.

So all in all,  Trump won the debate in all voter based polls and only losing that spot with establishment pundits, media, and other bought puppets.  He knew what he was talking about and the liars and uninformed only looked good to those that had no real facts.  Those pushing a propaganda agenda failed to call out a lot of the lies and misstated facts but fortunately there were a lot of fact finders blowing the whistle.