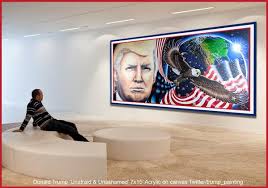 Follow Julian M. Raven on his mission from God to Iowa to show his portrait of Trump and share his heartfelt story of how he was inspired to paint the magnificent 7 foot by 15 foot masterpiece.  Most important is his story of why he believes God is choosing a Trump president.
Julian M. Raven is an evangelical preacher by vocation and an artist by trade. He has never been moved to paint a political portrait in his lifetime as an artist, but something happened in July and he knew he had to do this.
It was not until after Julian heard Trump speak that he recognized something different.  His boldness and strong tone, and speaking his mind clearly without being one bit politically correct.
Julian, being curious about the man and pondering the words he heard him speak, researched him and came across a particular photo of Trump that seemed to have the depth of the man he now knew he must paint.  As he studied the photo with an artist’s eye, two words came to the forefront of his thoughts.  Unafraid and unashamed.  For Trump had spoken of things that no one else had dared to say with no apology for having said the things he believed were true. No matter how the media attacked him, he was unashamed of anything he had spoken.  He stood by every word. He was clearly unafraid and unashamed. 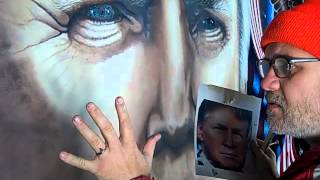 These two words whispered to Julian. Each time Julian looked at the photo they became louder and louder until they shouted throughout his very being.  Julian knew he had to paint this picture, and it had to have an eagle and a flag and it had to be done now.  Right now.  Little did he realize that this portrait was destined to be the greatest work and possibly most important of his lifetime.  All he knew was that it had to be titled “UNAFRAID AND UNASHAMED” and he had to begin now.
As he painted he had time to meditate, as artists do.  He imagined what to do with this work and somehow he knew it would be with the man destined to be the next president and some day hang in the Whitehouse.  Little did he know at the time he was painting it that he would be packing it up and doing a month long tour in the dead of winter in Iowa. Yet, that is what happened….and it was not by chance.  Julian put it this way, “I’m off to do God’s work.” 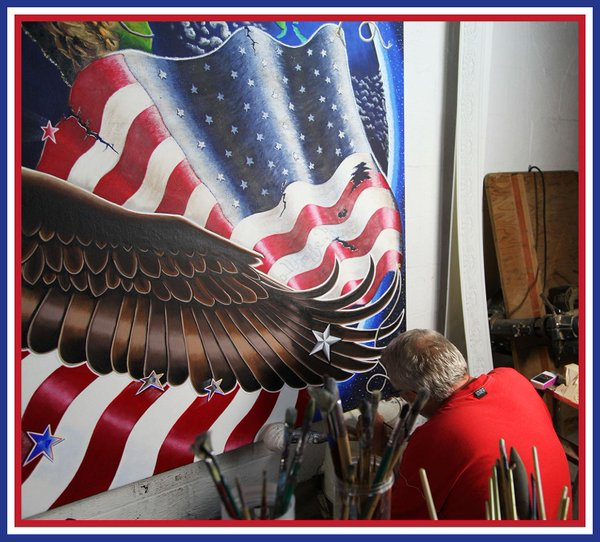 By the time he had finished the portrait, Julian knew he must tell the hidden message within the portrait.  The message that God laid on his heart to tell.  You can hear this message in Iowa.  He gives us a few hints as to what his presentation will be like in the video below.  Follow him on this journey on periscope.  Social media links to keep track of Julian’s updates and happenings are listed below.
You are all invited to follow him on his social media sites and welcomed to comment.  Please remember Julian in your prayers.  I am so excited to be able to watch Julian as he partakes in this historic adventure to do a great and marvelous work, unlike anything that has ever been done before from an independent individual on a campaign trail.
https://www.youtube.com/watch?v=q_hajEu7-Dg
Dianne Marshall
https://katch.me/JulianMRaven
If you want to follow the adventure please LIKE my page:
https://www….facebook.com/unafraidandunashamed
I will post a few updates on this page, but the daily reports will be on the ‘UnafraidandUnashamed’ page. You can also follow on twitter/@julianmraven
Julian Raven