“Never underestimate the magnitude of what ‘thank you’ means to veterans,” stated John Wayne Walding in his key speech at last nights  Trump Event.
Walding, a Green Beret who lost the lower part of a leg after being shot by a sniper in Afghanistan in 2008 is the author of No Way Out – A Story of Valor in the Mountains of Afghanistan. Walding said he wasn’t there “for politics” and delivered a heart moving speech about his personal story of injury and recovery. Get Walding’s book here:  https://www.barnesandnoble.com/w/no-way-out-mitch-weiss/1102498756?ean=9780425253403
Walding also spoke of his first time meeting the Donald. How Donald heard his speech at another event and expressed how much he liked it. Not only that, but how Trump later returned and sat down and visited with him for over an hour. I wonder why the press isn’t chomping at the bit to write about that? 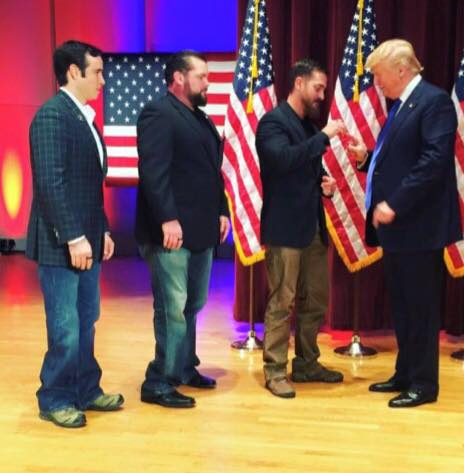 Representatives from 22vets.com, which combats veteran suicides, presented Trump with an honor ring. Presented by Jeff Kyle, (Chris Kyle’s brother).
From day one in announcing his presidential run, Trump has talked up  proposals to help veterans returning from the wars in Iraq and Afghanistan, including providing incentives for companies to hire veterans, providing business loans to veterans and overall ensuring veterans enjoy a more seamless transition to civilian life.
A policy paper posted to Trump’s campaign website shows his proposed details, including the requirement of OBGYN doctors at all VA hospitals, upgrades in technology at the VA and hiring more veterans to care for veterans. Trump also has pledged to fire “the corrupt and incompetent VA executives that let out veterans down.”
The event to raise money for veterans and wounded warriors was broadcast live, in full length by C-Span. After the event Democrats, Independents and Republicans called into C-Span to praise Trump’s veteran rally – Listen to these calls!

NOW FOR THOSE WHO HARBOR WOES OF SOUR GRAPES…
On the other side of the crazy way the media works, it’s amazing how many have been chirping the nonsense that Trump is using Veterans for political reasons. This is far from the truth. Last night an idiot female pundit on CNN, and I do mean idiot, said Trump was using the veterans because….(wait until you hear this one)- because this is the first Veterans Fund Raiser he has held since he started campaigning. She went on to say that if he really cared about the vets he would have held a fundraiser before now and he never has. Obviously she has never heard his pleas to all the networks to give the extra advertising dollars they are making off his ratings to the veterans. It was only fitting that he took his time that would have been wasted in the final debate and instead do the thing he has wanted to be done from the beginning, and that is to raise some money for the veterans and create a larger awareness for their cause.
Veterans and veterans issues have never been brought up in any of the past 6 debates, and definitely wasn’t on the list of gotcha questions prepared by the Fox’s panel of vipers to ask the candidates at last nights final debate. It was very moving to hear from the real veterans who are now on the home front battling to help their fellow brothers who came home with hidden wounds not seen outwardly. The name for it is post -traumatic stress disorder which is the hardest wound to heal. PTSD is the silent killer, Walding noted that 22 veterans commit suicide daily from this and more needs to be done to help those suffering with PTSD.  The monies that were raised last night will go to help this cause.
Trump’s stance on helping the veterans has always been one of his key policy messages. He has a history of helping Veterans – a lifetime of supporting all our men in uniform. This is not a new thing for the Donald and definitely not a prop. CNN would have done better to note how Trump gave his own money to build the Viet Nam Veteran’s memorial in new York City. But, why would they want to do that?
They could have mentioned the year when the veterans of New York were broke and not able to hold their annual veterans day parade and Trump saved the day. He gave his own money and rallied others to open up their wallets- that year the Veterans held one of the biggest parades they ever had.
Why didn’t they mention the story of Sgt. Andrew Tahmooressi, a US marine and Afghanistan war veteran, held in a Mexican prison for accidentally crossing the border s with personal firearms and when finally released after 214 days, Trump gave him $25,000 to help him get back on his feet. https://conservativetribune.com/trump-gift-freed-marine/
If all the things Trump has done to support the vets were written up ….it would be a long list indeed. The reporters who spew such lies need to be called out. Trump is for all Americans. He has never asked what political affiliation any of the veterans held before taking steps to help them. Never.
But, that doesn’t fit their agenda…now does it?
If you remember only one thing from this event, please remember the words of John Wayne Walding, “Never underestimate the magnitude of what ‘thank you’ means to veterans! ”
Dianne Marshall
https://www.usatoday.com/story/sports/nascar/2014/07/24/john-wayne-walding-brickyard-400-green-beret-your-hero-name-here/13124929/