TRUMP SUPPORTERS BATTLE CRY - I AM SPARTACUS! - The Marshall Report Skip to the content

Image the consternation, fear and apprehension the Roman officers experienced to have an army of rebellious slaves yelling in unison, “I am Spartacus.” If you have not seen the movie Spartacus, starring Lloyd Bridges, portraying Spartacus in this scene, view the YouTube video to appreciate the impact of what it means. 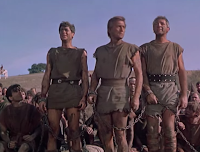 Slaves arose to dedicate themselves to a leader, by identifying with the name of that leader, and proceeded to march on to confront, challenge and overcome the injustices that were the cause of their suffering.

Having viewed this scene and appreciating the impact of what an army of slaves can accomplish, when, not only, vocally identify with their leader’s name, but also, spontaneously arise to follow that leader, you can appreciate the power of name identity, acceptance of a purpose, and commitment to a cause.

The comparison of Donald Trump to Spartacus is easy to see. Yes, The Donald is a wealthy individual compared to Spartacus, a slave. However, ignoring the wealth difference, the common sense population of the United States, not surprisingly identifies with Donald Trump, because of his outsider challenge to the unresponsive, political establishment in Washington, DC. Donald Trump is ridiculed and rejected by his party’s leadership and by the mainstream media, who, likewise, ridicule and reject the middle class, who they claim to represent. The salves have had it. In response to the oligarch’s question, “Which among you is Trump?” the nation’s slaves, one by one, yell out, “I am Trump.” Quickly the hardly heard response roars into a thundering movement to demand recognition and fundamental changes. A choir of voices shout out, “We can’t take it anymore.” “We want our country back.” “We want our democracy back.”

This is where we have arrived in the current moment. The enslaved citizens of the USA rising up in unison, “I am Trump”