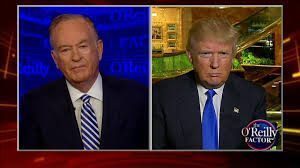 I have a news alert for the GOP and Media propaganda news puppets, if and when any nation leader comes after Trump, he will unpredictably have them begging like O’Reilly for a deal.  They will know fast that you don’t stab Trump or his America in the back and get away with it.
Really now, is anyone buying into the GOP and MEDIA AMNESIA propaganda? The lies that he is afraid to debate the losers, or face the media biased moderators? The lie that he has to learn to face tough questions from lightweights like Kelly?  Answer set up gotcha questions from loser You Tube radicals that have no business on a democratic debate stage, let alone a GOP one?  Give me a break.  From the moment Donald J. Trump announced he was running for the presidency, the world has watched the media rip, tear and shred him apart.  The National Review neoconservative pen trashing smoke hasn’t even cleared yet, it’s writers are still smoldering in failing flames. Hello? In each effort to destroy the Trump, he has stood strong, he’s been proven right, and his poll numbers have increased.
The majority of Americans have rode the GOP, media roller coaster ride with Trump – up and down all the hair raising curves, loops, and dips.  At the end of each media screaming ride, the supporters got off and cheered as they heard Trump shout, “Wow…what a ride, let’s do it again!”
And as others saw this, they too lined up with Trump to go again! Meanwhile the media watched, they snorted and sneered, “We’ll speed up this ride and none will survive!”  So they tinkered and toyed, even loosening some bolts, believing this time the Trump ride would crash.  They snickered and smirked with devilish glares, anticipating to watch them all be derailed.  But to their dismay when the coaster subsided – the frontrunner Trump and all his supporters got off safely and shouted  – “Wow…what a ride, let’s do it again!”
Now, it’s time as mourning Joe has said, to watch O’Reilly beg….
Dianne Marshall