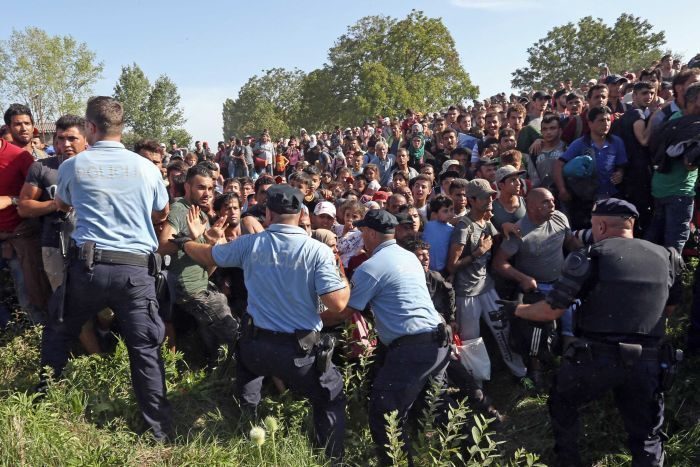 Dale Hurd, Stockholm -mentions Trump in a news report concerning the illegal immigration crisis in Europe, siting that his large voter support stems largely from the fears US citizens have in becoming like Europe.  He fails to realize that when Trump first announced his run for the Presidency, no one (but a few) knew anything about the crisis in Europe concerning illegal immigration.  Our fake news was making certain of that.

America was concerned due to the effects they felt by our own illegal problems including murders and other crime. Thanks to our propaganda controlled celebrity news, there were very few citizens that even knew sanctuary cities existed, let alone the trouble they created, nor did citizens realize that over 200 billion dollars a year was spent to give illegals a free ride.

Americans were focused on drug cartels, and ISIS coming across the borders they were ignored.  When they spoke out about illegals coming across the borders in box cars in droves they were chastised by the Obama administration for being racists. When they demanded something be done, legislators like Graham and the entire left wing radical regime came up with golden parachute amnesty programs that gave illegals more free stuff and rights than US citizens.  When Americans stood up and said that was not an answer they were chastised again.  Then they came up with another bad idea and were scolded for not embracing Rubio and his gang of eight’s Dream Act.

The way our news reported things, those fears quoted by Hurd were all unfounded.

At this very moment good people are under attack by the evil media for daring to point out the Muslim crisis.  Are any of them looking at Europe?  Are any of them looking at CAIR right here in America?  Do any of them care?  It looks highly doubtful. We are not only battling illegal immigration we are battling a deep seated administration that has placed the enemy in our back yards.  We are under the iron fist of the left wing voter fraud establishment pundits who have illegally placed an illegal Muslim in the highest office of the land.

The people of the United States of America can thank their lying elite establishment driven media for doing the bidding of the United Nations agenda.  They are all working hard like good little hamsters on a wheel to bring about chaos, WWIII and their idea of a new world order.

As migrants continue to pour into Europe by the hundreds of thousands the question they are asking is, “What if the migrant surge doesn’t stop?”  Isn’t it time we ask the same?

Stand with Trump to build a wall and send back the illegal insurgents.  The entire world is now aware of the dangers of illegal immigration and our news is still pushing anchor baby sympathy (our Trojan horse) along with a whole host of establishment puppets including puppet candidate Marco Rubio.  Wake up and recognize all of this for what it is.