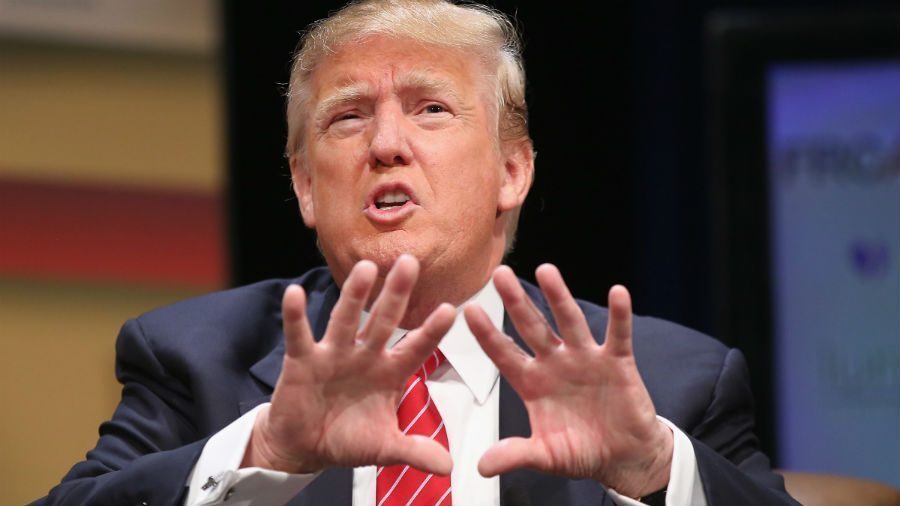 The only candidate that is standing strong against the global governance and exposing their evil plans is Trump.  I have watched other candidates mimic his stances to gain political advantage but only  AFTER TRUMP GAINED SUPPORT FOR HIS POLICIES.  You, if you are honest, have watched the exact same thing.

Trump has laid his reputation, fortune, and future out on the chopping block to run for president.  Not as a typical candidate, but as a patriotic international and entrepreneurial Titan stepping forth to preserve our nation and the way of life that made America great.  He is making bold moves, bold statements declaring to restore America back to sound morals, values and greatness.  He is the one shouting to put prayer back in schools and let states control education, secure our borders, enforce our laws, build a wall of protection;  while others promote common core, illegal immigration, lawlessness, and shout to build a wall is to create division.

Trump is the one that has stressed to take care of our Veterans, and stop ISIS able bodied men (which are more accurately termed Syrian mercenaries) from invading our nation while politically correct candidates and media are calling the same Syrian mercenaries coming to the U.S.A. refugees!   Trump has called it an invasion, where some candidates and the media have called it an act of mercy. These were not the topics in June before Trump announced his candidacy.  Able bodied mercenary refugees had been coming to America since the war in Syria, but never publicly announced to bring attention to the fact.  This act has always been a grave concern to Americans aware of this, but let’s be honest. This was not on the policy platform of any candidate before Trump entered the race and made it known.

Trump pleaded at the second debate for clarification from Doc Carson on vaccines of our tiny babies and the size of their bodies that cannot take mega doses of mandated vaccines. Carson quibbled,  but in the end, he did validate that Trump was correct.  Newborn babies should not have all the amounts of poisons in vaccines so close together.  Those shots are received better spread out.  He also said that some vaccines are up to discretion. That is as far as Carson went.  He said there was no research that showed vaccines caused autism, yet, the next day, social media was flooded with stats that showed the opposite. Dr. Tenpenny was among them with lists of medical research projects that proved him wrong.  It was like saying, water is needed for survival.  Yet drinking ten gallons all at once will not harm you is false.

Trump has addressed the middle east and ISIS, Hillary, Benghazi, Iraq, and the entire failed idea of toppling another sovereign nation. He has expressed that even if you don’t like the leader,  it does not allow you to go in and topple a nation.  That is an issue that is plain and all who have eyes to see can see.  The blind and bought continue to shout – take out Assad, take out Assad!  What is the reason in this?  War on terror? Whose terror?  The one those who shout topple Assad are creating on Syria or the ???? what has Syria actually done to threaten the United States?  I fail to recall any words, nor any action that violate any NATO agreement?  Who has any facts to support a toppling of Assad?

So U.S. strikes follow an act of aggression against the well being of the U.S.?  Well, try telling that to Doctors Without Borders who in Afghanistan declared the bombing on the hospital there was a war crime!  That story got buried fast by the Obama regime now didn’t it?  Why?  I speculate, and I do say speculate that Obama was looking for an easy way to justify keeping troops in Afghanistan so a Taliban raid on a hospital and a drone raid would justify that. Perhaps?  What he did not expect was a failed total destruction of the hospital and eye witnesses to his false story and war crime.  Nor did he expect that an independent investigation would be granted. Nor the coverage this event gained.  It is very serious and not at all over, nor swept under the rug.  You are just not hearing one more word about it. I imagined he expected to hear a total death story and declare more fervent war on the Taliban.  Hey???  That is the only thing that actually makes sense.  But, it is my speculation, of which I am sure I am not alone there at all.

There is much more to be said, but I will stop here and let the reader digest the amount I have just shared.