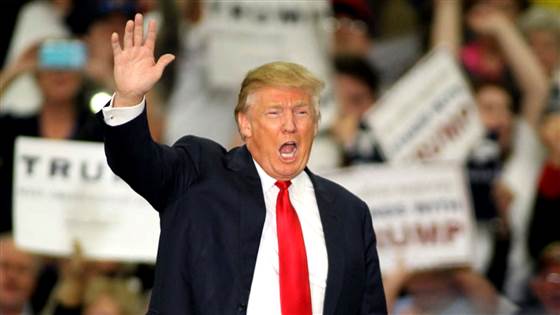 Only a leader like Trump the master artist of the real deal can fill up and overflow an event in just a little over a day !  Only Trump who has his finger on the pulse of America and arms wrapped around its’ heart could ever have done this…but… not alone…and not with just his supporters….there is another.  That one is God who is smiling down upon his people who are standing up for what is right for all the people and not just for some.  A people standing together to end the political correctness that has led a nation called by his name into a ruinous heap, devoured by sly foxes and ravenous evening wolves.
America is rising up out of its’ dangerous and luring bed of complacency.  I hear the angels shout HALLELUIAH with all the people who have prayed for mercy and repentance for America.  An America who has backslidden into deep despair and moral decline, no more a golden cup in the Lord’s hand!  I see a new hope and a new thing, a marvelous thing taking place.
Let us remember that all things are in God’s hands and each must do their part to make America great again, and in so doing let us return to the true understanding of what made her once great. The understanding held by the founding fathers that only a nation called by God’s name, with a people willing to keep his commands, would ever prosper and flourish.  It is time to awake from our slumber and stand together.  A nation of people, silent no more.
Dianne Marshall