What ever Cruz got himself into, he did on his own.  Lying Ted will do anything to smear and slander Trump.  Trump is not responsible for any media lies or reports. He has had the lion’s  share of his own smears to deal with, and a lot of those  came from the lying mouth of Cruz and Cruz Camp Super PACs. So if some of Ted’s own pernicious snakes come back in his own face and bite….it is what it is. 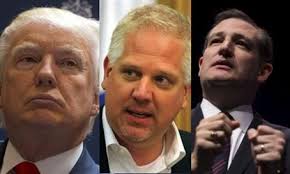 Trump is busy with his own campaign and has no time for lying whining Cruz, nor his lying Beck.  Isn’t Cruz supposed to be  on a white horse somewhere fulfilling some prophecy?  I suggest he  pursue  that and leave Trump alone. Or better yet,  let lying Ted ride his horse into the National Enquirer camp and battle it out with them.  They are the ones who wrote the article.  Trump had nothing to do with it.
https://www.facebook.com/login/?next=https%3A%2F%2Fwww.facebook.com%2Fkelly.romines.7%2Fvideos%2F1047769635270022%2F
Dianne Marshall